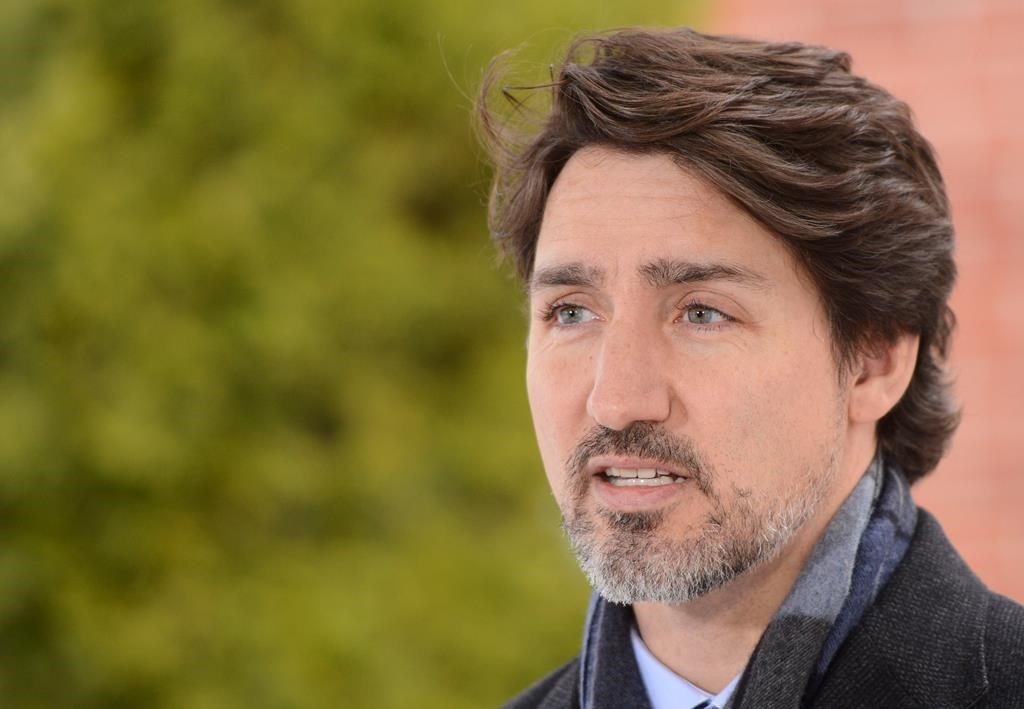 Prime Minister Justin Trudeau tried to let Donald Trump down gently Thursday, warning that Canada is still a long way from being ready to agree to relax mutual travel restrictions along its border with the United States.

Trudeau said he discussed the issue with the U.S. president during a videoconference with fellow G7 leaders, and the two agreed, given the unique relationship between the two countries, that they would continue to take a different approach to managing bilateral travel with each other from the ones they use with the rest of the world.

That does not mean, however, that a decision to relax the travel ban is imminent, he added.

"The work that we continue to do to keep our citizens safe, while co-ordinating very carefully, is unlike our approaches with other countries around the world. There's a recognition that as we move forward, there will be special thought given to this relationship," Trudeau said.

"But at the same time, we know that there is a significant amount of time still before we can talk about loosening such restrictions."

Trump, who often makes it abundantly clear that he's in a hurry to get the American economy back on its feet, seemed to suggest Wednesday that his impatience might well extend to the northern border — a shift in the usual balance of anxieties that has tended to define the Canada-U.S. relationship.

Trump seemed to suggest the two were comparable.

"Our relationship with Canada is very good — we'll talk about that. It will be one of the early borders to be released," the president said. "Canada's doing well, we're doing well, so we'll see."

It's been nearly a month since the two countries negotiated their 30-day ban on non-essential travel in both directions, a remarkable agreement that exempted the flow of trade and commerce, as well as vital health care workers like nurses who live and work on opposite sides of the border.

In terms of permitting the movement of goods and services into the U.S., the arrangement has held up better than expected, notwithstanding a few hiccups, said Mark Agnew, director of international policy for the Canadian Chamber of Commerce.

"Most of the challenges that we have received are around individuals travelling for work purposes," Agnew said. "Companies are finding a variance in how officers and specific points of entry are interpreting rules for identical situations for travellers going across."

Some making legitimate efforts to enter the U.S. have been turned away, he noted. And he cited a peculiarity of the way traffic is managed by the two countries at entry points: in some cases, Canadians who are denied entry to the U.S. and forced to turn around have then been ordered to quarantine by Canadian Border Services Agency officials.

"This is a quirk in the system that should be looked at, since they have not gone past the point of entry into the United States."

The agreement is due to expire by Tuesday, and talks on extending it have been underway for several days, said Deputy Prime Minister Chrystia Freeland, who insisted that keeping the restrictions in place would be "the neighbourly thing to do."

Despite those "extremely friendly, extremely neighbourly and extremely effective" discussions, however, Canada won't do anything that would risk putting its citizens in jeopardy, she insisted.

"What I can guarantee is that decisions about Canada's border are taken by Canadians, full stop," Freeland said. "Our government will only (open the border) when it is appropriate and when it is not a risk to the health and safety of Canadians."

Ontario Premier Doug Ford urged Ottawa to "say no right away," and said he wished Canada had closed its doors earlier, although he was quick to insist he wasn't criticizing the federal government.

"Until we have this under containment, we need to keep our borders closed," Ford said. "We should have shut down the borders a lot sooner."

Trump issued national guidelines Thursday aimed at steering the country's economic recovery, even as congressional and state lawmakers persisted in warning of the dangers of going too fast, too soon. The president has eased away from his earlier insistence that the decision would be his alone to make — a power that in fact rests entirely with state governors.

Public health officials in the U.S., while they point to clear signs of improvement in the effort to slow the rate of infection, continue to drive home the importance of maintaining measures already in place — physical distancing, staying home where possible and aggressive personal and environmental hygiene — as critical to long-term success.

Trump's three-phase strategy — "Opening up America Again," a riff on his famous campaign slogan — appears to hew to that approach, focusing primarily on those parts of the country with a declining infection rate and a robust testing regime. In such regions, physical distancing would persist in public, and non-essential travel and gatherings of more than 10 people would be discouraged.

"We are not opening up all at once, but one careful step at a time," he said. "This is a gradual process."

Over time, provided infections continue to decline, larger gatherings and recreational travel would be allowed to resume, provided new cases are carefully tracked and isolated.

Nearly 30 per cent of the country has reported no new cases in the last seven days, Trump said.

Trudeau refuses to point fingers as Trump calls out WHO