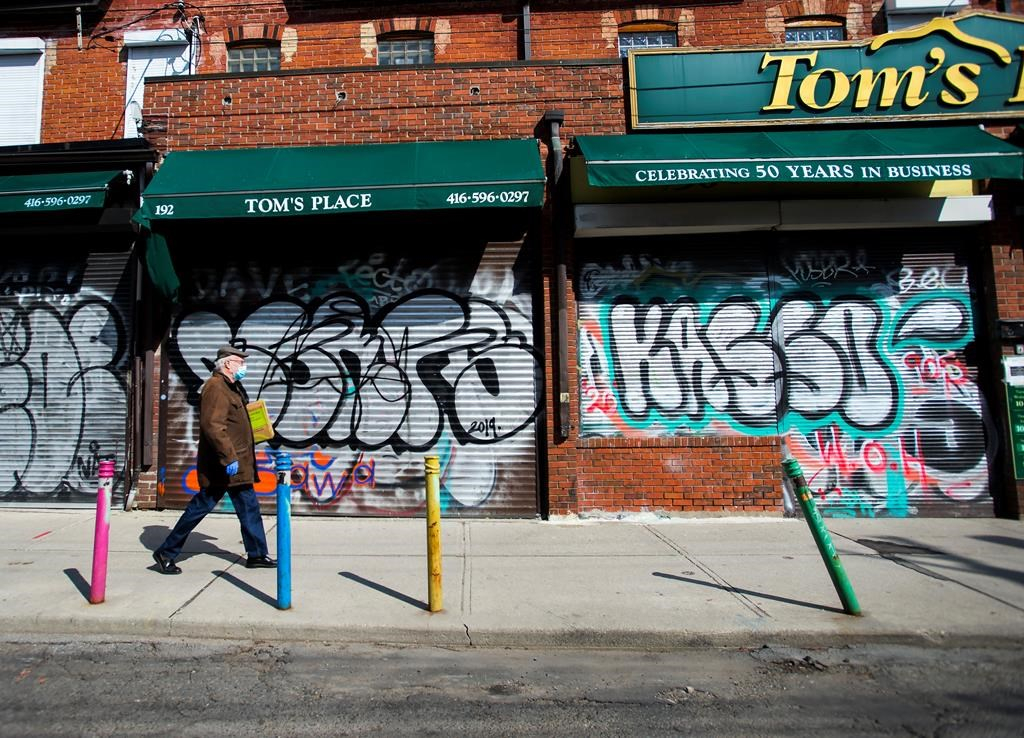 A lone person walks past closed businesses in Kensington Market in Toronto on Wednesday, April 15, 2020. File photo by The Canadian Press/Nathan Denette
Previous story
Next story

The first payments from a $73-billion federal wage subsidy program will flow by the end of the first week of May, acting as a buttress against the economic shock from COVID-19.

The Liberals are hoping the 75-per-cent wage subsidy will prompt companies to rehire vast swaths of the six million Canadian workers who have asked for emergency federal aid since the pandemic brought the global economy to a virtual standstill.

Online applications will open April 27 and officials expect to have processed 90 per cent of claims by May 4 with payments landing later that week, MPs on the House of Commons finance committee were told Thursday.

With expectations the freeze on the economy will be lifted before summer, Bank of Canada governor Stephen Poloz warned it might still be some time before the economy is back to its pre-crisis level.

"We're going to get a V-shaped trajectory, so down very sharply, then of course back up, but not all the way," Poloz said.

"That's when it takes another, maybe a year for the economy to get back to the same path that it was on before all this started."

The longer it takes for economic activity to resume, though, the more likely that businesses will close for good and the longer workers will face unemployment as they look for new jobs.

On Thursday morning, the government announced an expansion to a loan program for small and medium-sized businesses, and promised a new support for companies having trouble paying rent.

"Our government is here to help you through these challenging times. So when we hear the program is not reaching as many people as it should, we make changes," Prime Minister Justin Trudeau said, acknowledging the criticism the government faced from companies who had felt left out.

Since the loan program was launched last month, businesses have taken out 220,000 loans worth $8.8 billion, Finance Minister Bill Morneau told the finance committee.

Pushed about some small businesses that may still not qualify for the help because they pay in dividends or employ contractors, Morneau suggested those workers would qualify for the $2,000-a-month Canada Emergency Response Benefit.

The federal government is also working on a program to help businesses and commercial landlords cover their rents for at least three months, though the details still need to be worked out with the provinces and territories, Morneau said.

The federal government has upped its spending by over $105 billion to cover fiscal help, with monetary policy playing a supporting role as the economy went into a tailspin from COVID-19.

Adding to the shock has been plummeting oil prices — Alberta's benchmark price is down 90 per cent from the start of the year due to declining demand and a glut of international supply.

Poloz said the central bank would likely have slashed its key interest rate in response to the oil price drop alone.

The Bank of Canada made three rate cuts — two unscheduled announcements — in March to reduce its target overnight rate from 1.75 per cent to 0.25 per cent, which Poloz said is effectively as low as it can go.

"Just on the basis of the drop in commodity prices alone, I would say we would have cut interest rates by at least 100 basis points, such as what we did in 2015," he said during his final scheduled appearance before the committee before he leaves his post in June.

"Possibly we would have ended up doing all 150 basis points if that were the only shock we were facing."

The economic shock from COVID-19 is unlike anything the country has ever seen, Poloz said.

A preliminary estimate by Statistics Canada suggested the economy contracted by nine per cent last month, which would be the worst one-month drop on record.

The central bank on Wednesday announced plans to start buying provincial and corporate bonds on the secondary market to reduce the risk those markets will lock up. Those measures are to inject up to $60 billion into the economy and will last, tentatively, for a year.

The bank is also increasing the quantity of federal treasury bills it's willing to buy, beyond a $5-billion-a-week purchase, effectively making more low-interest loans to the government.