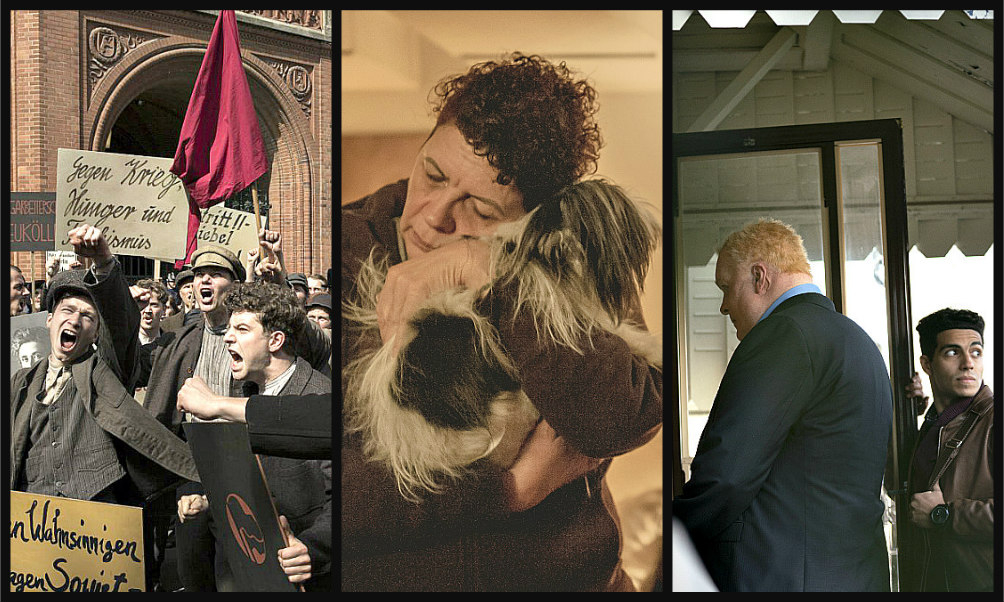 The streaming challenge to movie theatres just keeps on growing. Universal Pictures reported that last weekend Trolls World Tour was the highest-grossing video-on-demand title ever. Netflix, meanwhile, has seen a jump in its stock price and Disney+ reports it now has 50 million subscribers. It got them in just five months. Netflix has 167 million, but has been in business for 13 years.

Going with that flow, here are a few more suggestions for movies (and one series) to stream.

BABYLON BERLIN: Of the few extended series that I’ve watched or tasted during this lockdown, this has been the most compelling. Not perfect. There are stretches when it drags, but most of the time, it clicks. History buffs will be especially interested because it takes a wide scope from political to pop cultural. It has a lot of material to draw on, being set in 1929 Germany, the era of the Weimar Republic where the flappers danced in the cabarets, the poor huddled in crowded rooms, generals dreamed of rearming despite the Treaty of Versailles and both left- and right-wing protests made noise in the streets.

Two seasons of eight episodes each have been available for some time on Netflix and a third has just started.

At the centre are two people doing police work, a detective on the vice squad (Volker Bruch) brought in from Cologne to take down a pornographic film trade and a typist (Liv Lisa Fries) trying to get on to the homicide squad. Their paths cross repeatedly, principally over an unrelated case: a train that was hijacked in Russia and is now in Berlin. Anti-Stalinists want to divert it to Leon Trostky in Istanbul and the Soviet embassy is demanding to gain possession of it. It’s a sprawling storyline, taken from a series of novels. A crowd of interesting (and often suspect) characters appear, like “The Armenian,” some plotting military types, a shady industrialist, a countess who cross-dresses as a cabaret singer and, most impressively, a tough chief inspector played by stocky Peter Kurth. You can’t tell whether he’s a good or a bad guy. Film noir influences are everywhere.

The series has very high production values. It’s the most expensive ever made in Germany and recreates the look and feel of the 1920s there perfectly. Three directors created it, with Tom Tykwer in the lead. He’s best known to us for the hit Run Lola Run and the charming comedy Good Bye, Lenin! There’s quite a bit of sex and nudity (apropos of the freewheeling good times of the era) and an ever-present unease of what was to come. By the end of the first two seasons, there's been one demonstration by the brown shirts and just one throwaway mention of Hitler. One complaint: the series is dubbed into English that sounds way too American. I can’t imagine Germans back then called an apartment a “pad” or, as one does repeatedly, referred to women as “broads.” (Netflix) 4 out of 5

MURMUR: This is a modest and minimal film that’s also immensely engaging. It’s from Nova Scotia, made by Heather Young, whose previous films were shorts, and starring Shan MacDonald, in her first acting job. Both deliver tremendously.

Shan plays a woman assigned to a job at an animal shelter after an impaired driving conviction. Her daughter won’t talk to her. But a sickly dog named Charlie comforts her and she takes him home. “He deserves a chance,” she says, despite his heart failure, skin problems and ear infection. In her small apartment, he proves incontinent, too. But she dotes on him. “He loves me no matter what I do.” Then she brings him other animals as friends. Naturally that can’t last once there are six or seven pets lounging around her living room. We’re waiting for what would get in the way and when it does, it becomes intensely moving, yet completely in keeping with the gentle mood of the film. It played at VIFF, was supposed to open today at the Cinematheque, but is available in a virtual screening at a modest price. (https://thecinematheque.ca/) 3½ out of 5

CANE RIVER: Also streaming by The Cinematheque is this legendary American film that was lost for 30 years. When he made it back in 1982, Horace B. Jenkins told a love story and at the same time illuminated the lives of Black people. The legacy of slavery is a strong theme in the story. Jenkins, an Emmy winner for his TV work, including for Sesame Street, died before he could arrange distribution and his film disappeared. A print was found in a lab a few years ago and has been restored for festival screenings. Reviews have been more than enthusiastic. It’s available at https://thecinematheque.ca/ starting today.

RUN THIS TOWN: This one was here briefly and unnoticed last month, and starting Tuesday, gets a new life in video on demand. This is the Rob Ford movie, about the late mayor of Toronto who tried to deny his drug use and became internationally known because of it. (Oddly, his brother is now the premier of Ontario and a voice of sanity in the COVID-19 pandemic). Rob is portrayed by Damian Lewis (and through the direction and screenplay by Ricky Tollman) as an erratic, sometimes bullying, sometimes threatening inebriate with a gregarious hugging side.

But don't expect a full portrait of the craziness that people have identified around him. The film isn't focused on him; it's mostly about his staff and others. Kamal (Mena Massoud) is the assistant who has to cover up for him. Ashley (Nina Dobrev) deals with the press for him and gets the most offensive sexual allusion in one of his outbursts. The main character is a young newspaper reporter (Ben Platt) working for two bosses (Scott Speedman and Jennifer Ehle). He's offered an incriminating cellphone video of Ford and argues that he’s the one to pursue the story. The film is about youthful idealism and ambition. Ordinarily that's fine; here it's not what we came for. Or correct. In real life, it was a female reporter who did the digging. Also, the film is oddly verbose, not concise like newspapers should be. It’s a minor take on real journalism. 2 out of 5

THE DECLINE: Canada has been pushing Netflix to produce more content here in Canada. This is the first effort from Quebec. Don’t expect much that’s unique, though. The story, the look, the characters are all generic. The snowy landscape is Quebec for sure, because they tell us it is.

Six guests have arrived at remote training camp run by a survivalist (Réal Bossé). He’s spent 10 years building a lodge, a geodesic dome and, in the woods, trails to allow quick escape. They’re equipped with booby traps to catch intruders and sensors to pinpoint their location. Clearly he’s obsessed. So are his guests, who talk about preparing for an epidemic, economic collapse, climate refugees or, in one laughable fear cited with a straight face, “when 5,000 immigrants invade your neighbourhood with machetes.” The film, directed and co-written by Patrice Laliberté, starts with a discussion of that kind of paranoid thinking and then takes the easy way out: action. The guests split over what to do after one dies in an accident. They start shooting and tracking each other through the woods. An ex-soldier (Marie-Evelyne Lessard) breaks out of her funk to do her part. The film becomes a terse and snappy thriller and leaves the thinking behind. (Netflix) 3 out of 5

CANADA FILM DAY: It’s this coming Wednesday, April 22, and celebrates our own movies by getting them shown. Since the theatres are closed, though, the streaming services have been encouraged to join in. All sorts have and a huge variety of films are available this year, many for free. There are recent gems like Antigone and The Grizzlies, classics like The Apprenticeship of Duddy Kravitz, and masterpieces like Atanarjuat: The Fast Runner, and Away From Her. What category would you put The Trailer Park Boys in? There are B.C. films, Double Happiness and Meditation Park, also Room, which brought Jacob Tremblay to our attention and won Brie Larson as Oscar, and The Decline, a Netflix film I reviewed above. You can see the whole list at https://canadianfilmday.ca/20+20/. For more info, including availability, just click on individual titles.

ROJO: The VanCity Theatre has added another good one to the films it's streaming for us during the shutdown. This one is from Argentina and dramatizes the moral decline that happened there leading up to the right-wing coup of 1976. Almost everyone is corrupt in some way in this story which works as both a straightforward film noir or an allegory. A TV detective investigates the case of a missing man and a lawyer has to divert suspicion from himself. It’s an intriguing and hypnotic puzzle. (https://viff.org) 3½ out of 5

FREE SOLO: Disney+ is rich with content, but if you haven’t yet seen this one, do. It’ll take your mind off every other anxiety of the day and give you a bit of a tingle with your fear of heights. Watch Alex Honnold try a free solo climb (no ropes or harness) up El Capitan, a fabled mountain in California’s Yosemite National Park.

It’s an astonishing feat; you’ll see it from above, below, each side as he grasps for tiny cracks in the rock wall and, many times, for just a slight bulge. We learn a few details of his life. He lived in a van for 10 years; his father was remote and his girlfriend impatient. No mention of his climbing trips to Squamish, though. Even then, the film won an Academy Award. (Disney+) 4 out of 5