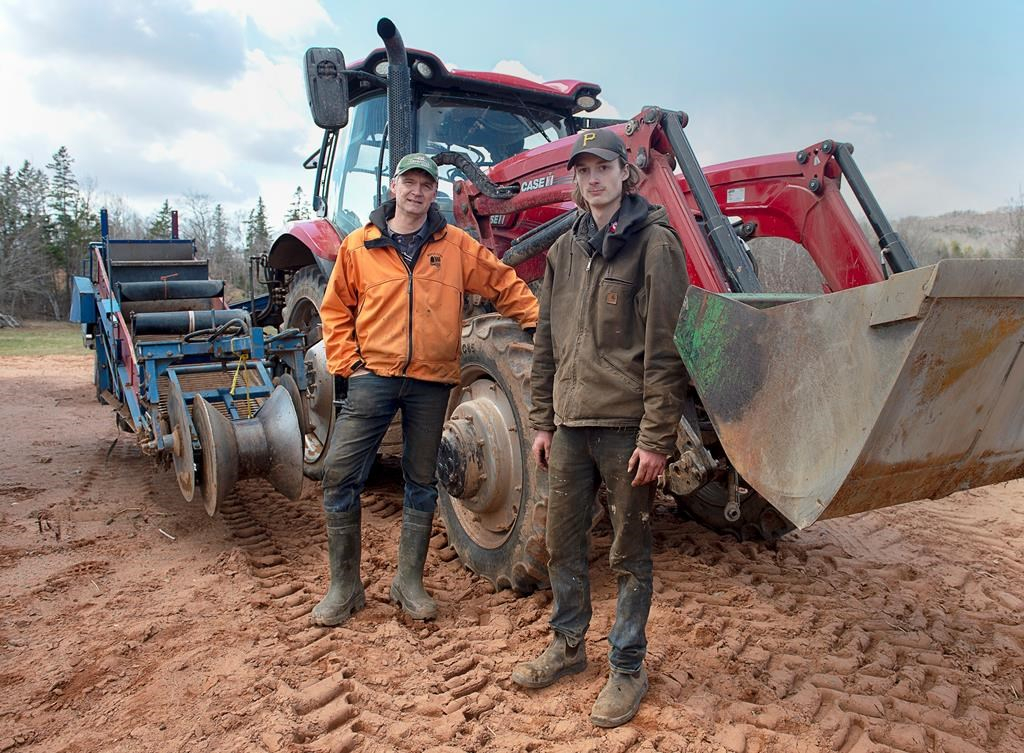 Greg Gerrits and his son James stand in front of a tractor on their family-owned Elmridge Farm in Centreville, N.S. on Friday, April 17, 2020. File photo by The Canadian Press/Andrew Vaughan
Previous story
Next story

As Greg Gerrits hustles to keep up with the surging public appetite for his preserves and parsley roots, his emotions shift between hope and skepticism over the revival of smaller scale agriculture.

"I'm not sure how long this fascination with local produce will last," he said in an interview from the Elmridge Farm fields in Nova Scotia's Annapolis Valley.

"It would be nice to think people will learn something and support their local farmers, but humans don't learn very easily."

The 49-year-old farmer of fruits and vegetables managed to recently launch an online sales system, just as COVID-19 descended in March.

He and his wife Suzanne also tapped into a network of idled truck drivers to provide the deliveries from their 72-hectare operation in Centreville, N.S.

Sales on everything from carrots to pesto have quadrupled compared to last year, with a single week selling $3,000, up from last year's $500. Their new network is also bringing in fresh sales.

The third-generation farmer is aware food security is a growing concern across the country, as the president of the Canadian Federation of Agriculture recently urged Ottawa to "prioritize food production" amid abattoir closures and rising costs related to COVID-19.

Yet, some East Coast market farmers remain cautious any revival of local production will be sustained.

Ann Huntley, a free-range beef, poultry and vegetable farmer in Scots Bay, N.S., has seen a quadrupling of her beef sales, from the equivalent of one animal a month to one per week.

"When everything is so uncertain, shelter, food and clothing become paramount," she said.

However, whether she and her husband should borrow $20,000 to $40,000 to increase her herd gives her pause, as the question remains whether the market will still be there when the cattle mature.

"There's access to financing (for) small farms we haven't seen before, but you don't want to jump into a whole world of debt amidst a pandemic," the 42-year-old said.

"I feel a lot safer buying vegetables that not a lot of people have touched," she said in a telephone interview.

The taste of organically grown produce is a factor as well. She already is eagerly awaiting freshly harvested beets she grates onto salads, turns into soup and pickles in jars.

"For me the purchasing will stay as a habit," she said.

However, Kevin Arseneau, a Green party member of the New Brunswick legislature, sees a need for government initiatives to bring a lasting restoration of small farming in the region.

He says for the past century Ottawa has accepted an export-oriented model of mass-produced produce at the expense of local food production.

Provinces such as New Brunswick now only produce eight per cent of the vegetables consumed there "as cheaper imports have entered the retail marketplace," according to the government's 2018 Local Food and Beverages Strategy.

Arseneau, who co-owns a Rogersville, N.B., vegetable farm, has issued a call for a loosening of pandemic restrictions on farmers markets that are currently required to have a maximum of five people in the sales area.

He said there's no reason they can't create rules like supermarkets, allowing controlled numbers to file through the stalls.

"Under existing rules, if there are 10 vendors in the market, then you can't let any people come inside. Grocery stores aren't being treated by those rules," said the 34-year-old politician.

He's also calling for a $4 per hour wage subsidy to help recruit local workers, interest-free loans for small farms, and an increase in the grants to small farms through the federally run Canadian Agricultural Partnership.

Gerrits notes that labour is also an issue because even smaller operations now rely on workers from the Caribbean and Mexico through the temporary foreign worker program.

Their flights were delayed due to concerns over the novel coronavirus, and the first to arrive in Nova Scotia are now mostly quarantined, leaving farmers concerned about falling behind in weeding and planting.

"It's a dance with Mother Nature and she leads, no questions asked. Either keep up or forget it," Gerrits said.

Deborah Stiles, a retired professor of rural studies who taught at Dalhousie University's agriculture department, says Atlantic Canada was largely self-sufficient in food prior to the world wars, but there has been a steady decline in sectors ranging from apples to sheep due to lower priced imports.

She said the movement to restore small farms began growing in the 1990s, when it was led by women's organizations and organic farming networks, but the pandemic has given it a fresh push.

"The key to the future is rebuilding regional foundations of self-sufficiency," she said.

"Living locally now doesn't mean not occasionally having an avocado or orange, but eating more consciously, and more often, from what our farmers grow here," she wrote in an email.

There are signals provincial leaders are taking note.

At the conclusion of Thursday's pandemic briefing, Premier Stephen McNeil took several minutes to acknowledge farmers, and noted his government has set up a program to hasten the arrival of the foreign field workers.

In New Brunswick, an all-party agriculture committee has been set up to consider ways to help the local food-production sector during the pandemic.

But for farmers like Gerrits, the jury is out on how much to expand — if at all.

"For local food production to recover and become securely established will require that consumers stay the course of buying local produce for a number of years," he said.