By Christopher Reynolds | News, Politics | April 19th 2020
#366 of 888 articles from the Special Report: Coronavirus in Canada 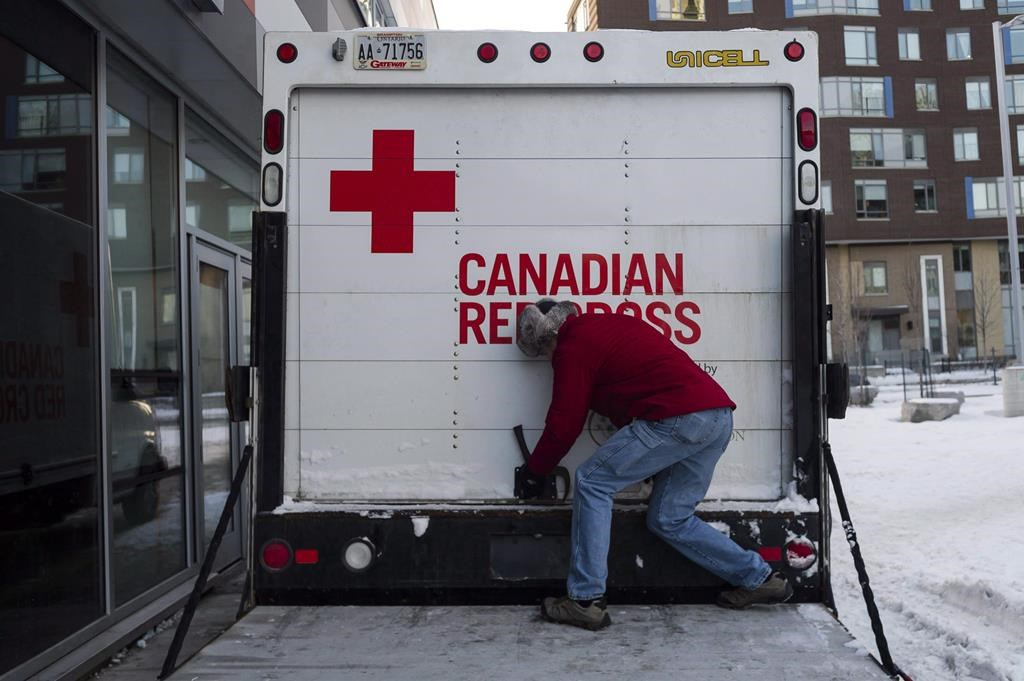 Bill Behse of the Canadian Red Cross checks the contents of an emergency shelter unit in Toronto on January 5, 2018. File photo by The Canadian Press/Christopher Katsarov
Previous story
Next story

More grim numbers have emerged at a long-term care facility in suburban Montreal as the Canadian Armed Forces prepared to fan out to nursing homes across a city that has become Canada's COVID-19 epicentre.

So far, 61 of 99 residents at the Residence Herron have tested positive for COVID-19, with some results still pending, according to the regional health authority.

Some of the residents have been hospitalized "because of their condition," said Guillaume Berube, a spokesman for the CIUSSS de l'Ouest-de-l'Ile-de-Montreal.

The new numbers do not include the 31 deaths reported earlier at the facility, which came under provincial trusteeship after reports of appalling conditions at the home.

"Because of the 31 deaths, there's an investigation, and I can confirm that five of them died because of the virus," Berube said in a phone interview Saturday.

As he spoke, 125 military personnel with medical expertise geared up to deploy to nursing homes in the Montreal area after Premier Francois Legault took the unusual step of asking the federal government for assistance from the Canadian Armed Forces.

"For the moment, five long-term care centres in the Greater Montreal area are at the heart of the reconnaissance efforts and the needs analysis will be performed in liaison with the civilian teams on site," the Forces said in a release Saturday.

The regional health authority for Montreal's West Island, which is now overseeing the Residence Herron, confirmed it will receive support from a team of military nurses and orderlies over the next few days.

"A meeting will also take place today to determine which establishments in its jurisdiction will receive this support as a priority," Berube said.

The so-called intervention teams bound for the five long-term care homes in Montreal will be composed of one nurse and 12 technicians, each supported by support staff, the Forces said.

The regional health authority is also partnering with the Canadian Red Cross to organize training for volunteers at nursing homes ravaged by the pandemic.

The Red Cross will train 40 people each day to help residents of the area's long-term care facilities as the virus rages through Quebec, which counts the most confirmed cases of any province at more than 17,500, the health agency said.

The province reports that 805 Quebecers have now died due to the virus, more than half of them in Montreal, where there are more than 8,000 confirmed cases.

Among the dead was the first orderly in Montreal to succumb to the disease, according to the Canadian Union of Public Employees.

The union said the employee, who had more than 25 years of experience and was still on the job one week ago, worked at the Grace Dart nursing home under the same regional health authority that is now responsible for the Residence Herron.

"Know that we are crying with you today, but that tomorrow we will resume the fight on all fronts to ensure that these essential employees can do their jobs safely," said CUPE Quebec president Benoit Bouchard in a release.

The Grace Dart residence has at least 62 confirmed cases of COVID-19, according to government data.

On Thursday, Prime Minister Justin Trudeau said the Red Cross or some of the roughly 30,000 Canadians with medical training who have registered with Health Canada as potential volunteers could be tapped to assist with the crisis.