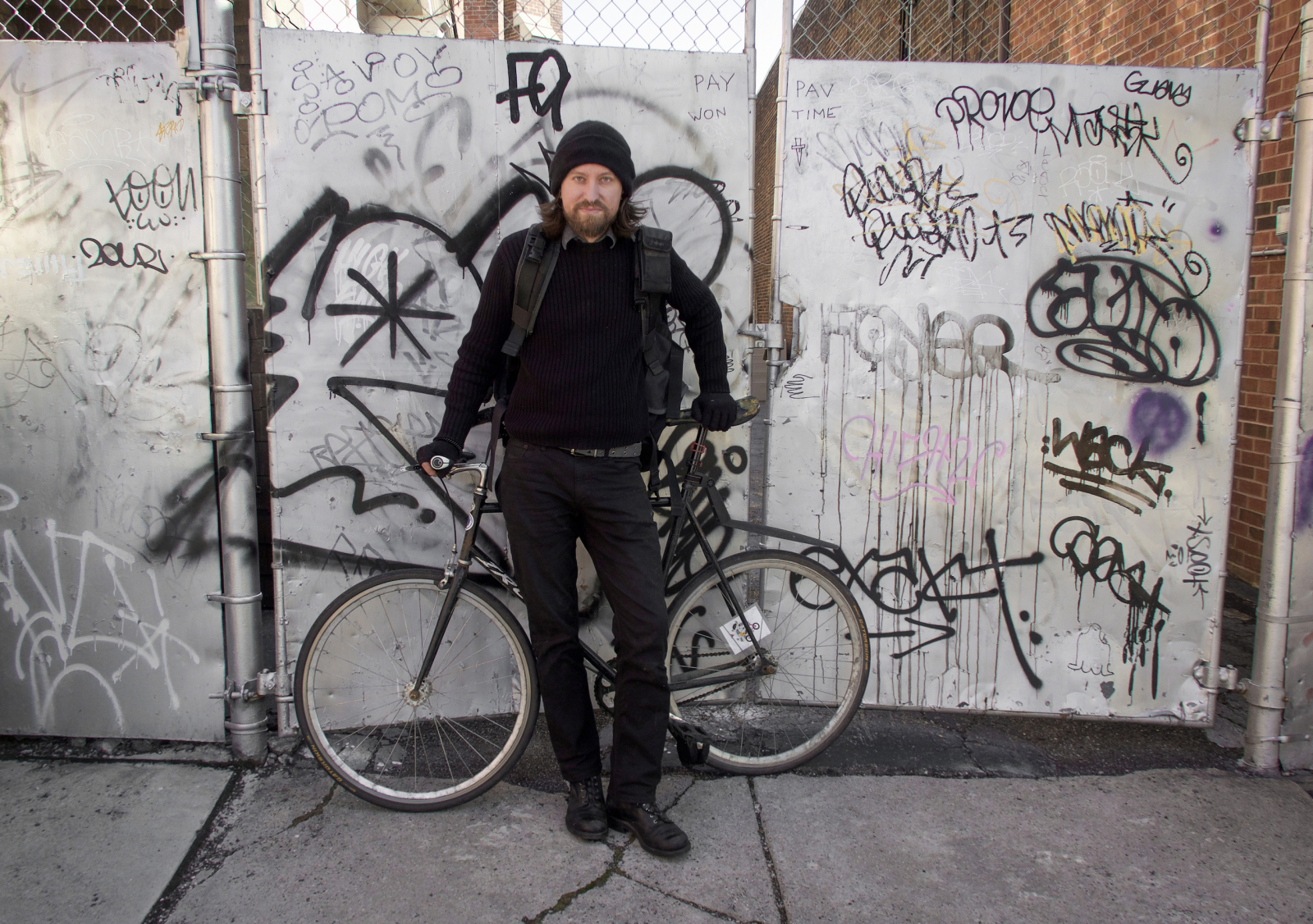 Bike courier Alex Kurth is making good money, but he's worried about getting sick and spreading the virus. Photo by Tess Siksay
Previous story
Next story

Alex Kurth switched back to food delivery for the first time in three years after his work as a live music technician and bartender dried up last month with Toronto’s COVID-19 lockdown.

But while he is making between $30 and $40 an hour delivering by bicycle for Uber Eats during the prime evening-meal window, he’s not happy about it.

“The money’s good, but I’m very worried about exposing myself to and potentially spreading the virus right now,” said Kurth, who said two-thirds of his customers still want their food delivered directly to their condo or apartment door.

A big part of his dilemma is that much of what he delivers does not seem essential.

“It seems absurd that bicycle food delivery is considered an essential service when I'm mostly delivering junk food, cheesecake and bubble tea to rich people in high-rise condos rather than needed meals to vulnerable or disabled people,” he said.

Kurth is considering stopping work and instead relying on federal government relief funds, but has so far been unable to navigate the system.

He applied for Employment Insurance (EI) sickness benefits in late March, after cutting short an Australian vacation and going into two weeks of mandatory self-quarantine. But that application has gotten stuck, with the system requiring him to call a 1-800 number to explain his travel and why his last work date was earlier than when COVID-19 impacts started being felt. He’s been trying to reach someone for two weeks.

“It’s completely impossible to get through, and until I manage to talk to anybody my application can’t proceed at all,” he said. “So I’m not receiving any money.”

Ottawa later launched the Canada Emergency Response Benefit (CERB), offering $500 a week for four months to those who lost all income due to COVID-19. The benefit has evolved over time, including with the addition last week of part-time, contract and seasonal workers to the list of those eligible and the allowance of earnings of up to $1,000 a month. The government has advised those who had already applied for EI, like Kurth, not to put in a second request for CERB.

Iván Ostos, a spokesperson for the Foodsters United labour group seeking to certify Foodora riders, said Ottawa’s CERB expansion means most of the service's riders could now choose to self-isolate, but that some have to keep working, including those who may not have a valid social insurance number.

“If you’re a migrant, a student or something and you are here for working or studying you may not get CERB,” he said.

Ostos also said he worried that riders are ill-equipped to protect themselves and that the Canadian Union of Postal Workers union — which the Ontario labour board said in February could represent Foodora workers as dependent contractors — was pushing the company to make no-contact delivery mandatory.

“That infringes on our own right to have a safe workplace, to refuse unsafe work,” he said.

Foodora spokesperson Sadie Weinstein did not directly respond when asked why the company has not done so. She said they wrote to customers on March 12 to let them know they could choose to request a lobby drop-off and made contactless delivery the default option at the end of March. She also said the company had looked into providing riders with personal protective equipment but it was not possible at this time. 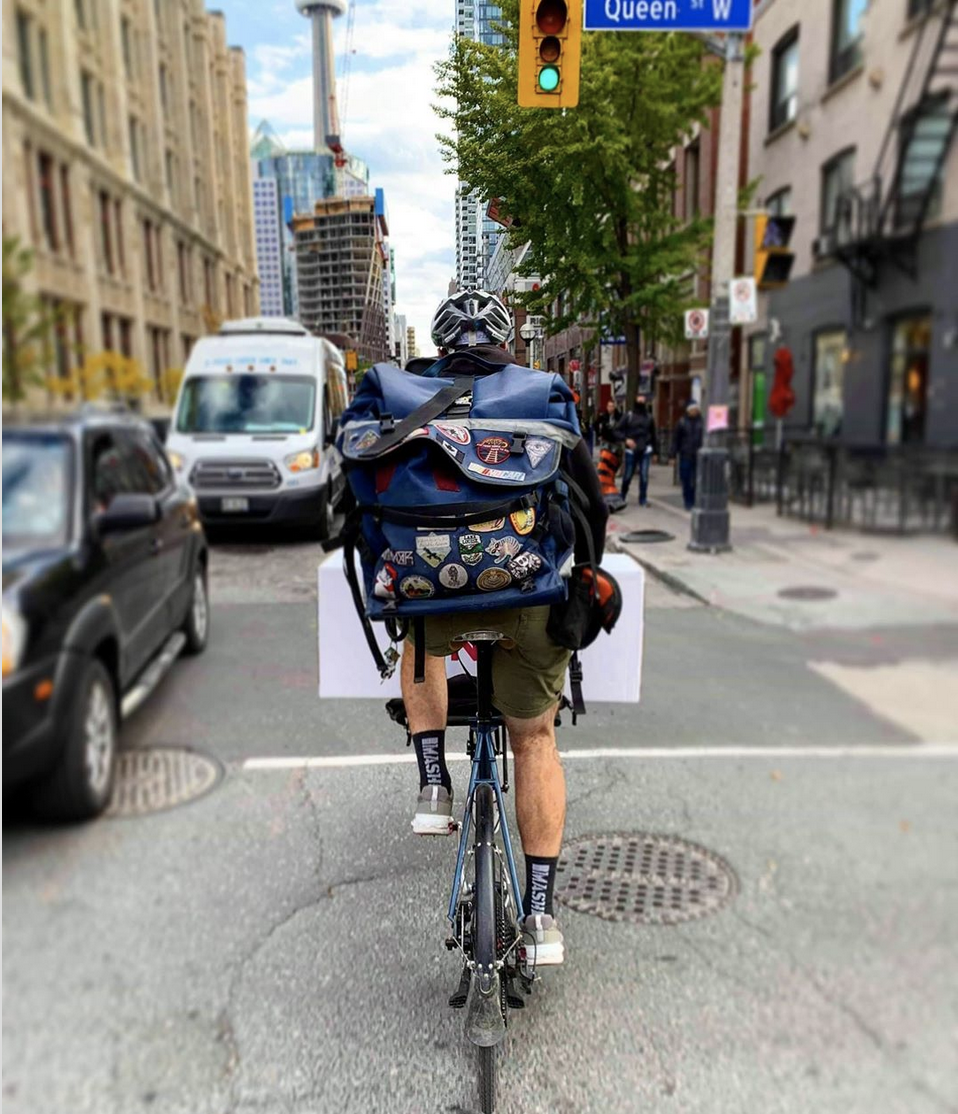 Courier companies that mostly service corporate and business customers have been particularly hard hit by the shutdown of office life, although they’ve also found a way to fill different customer needs.

“Our bicycle couriers are the worst hit,” said Barry Rapps, the president of United Messengers Ltd, who had to let half of them go when COVID-19 and the resulting shutdown cut same-day rush delivery volumes in half.

The company uses a fleet of 300 owner-operator drivers and bikers, it says on its website. Rapps did not disclose how many of them were cyclists.

He said the company can’t call on the federal government’s wage subsidy program, since its driver delivery services remain in demand to get things to workers living in suburbs or further afield and its overall revenue has not fallen by the 30 per cent required.

Volumes at Sendit Courier, a fully bike-based workers collective, plunged around 60 per cent early on in the lockdown, but has since evened out to about 40 per cent below normal, said worker-owner Tam Nguyen.

The type of goods moved has also changed: out with corporate catering, legal documents and architectural drawings, and in with delivering office equipment to enable work from home, as well as alcohol and groceries.

“We have gained a lot more flower and pharmacy deliveries,” said 28-year-old courier Alex BG. But while he is still pedalling for Sendit and is ineligible for CERB or other government supports, the reduced workload is starting to bite.

“I’m spending less on groceries and have approached my landlords about paying less rent or delaying payments,” he said.

Very interesting and informative article.
However I find the comment by the bike courier Alex Kurth very distasteful. If he does not want to deliver "junk food, cheesecake and bubble tea to rich people in high-rise condos ..." then he knows his options. His underlying racist views are also showing in his statement with his highlighting of bubble tea.
I am sure that he can volunteer his time to deliver food and other services to vulnerable and disabled persons, but the key word is VOLUNTEER.
He probably would not be paid for volunteer activities. Alex Kurth should not be so quick to bite the hands that feed him.

Mandatory Contactless delivery + Lobby drop-off is an excellent idea. It sounds to me that 'fomite' transmission is much less a cause for concern than inhaling micro-droplets from an infected person.
Much of his delivery may be 'junk food', but if he is helping his customers to self-isolate, keeping CO2 emissions low, reducing the financial burden on our government (might be better if he didn't spend part of his wages flying across the ocean), then I think he is making a very commendable contribution.