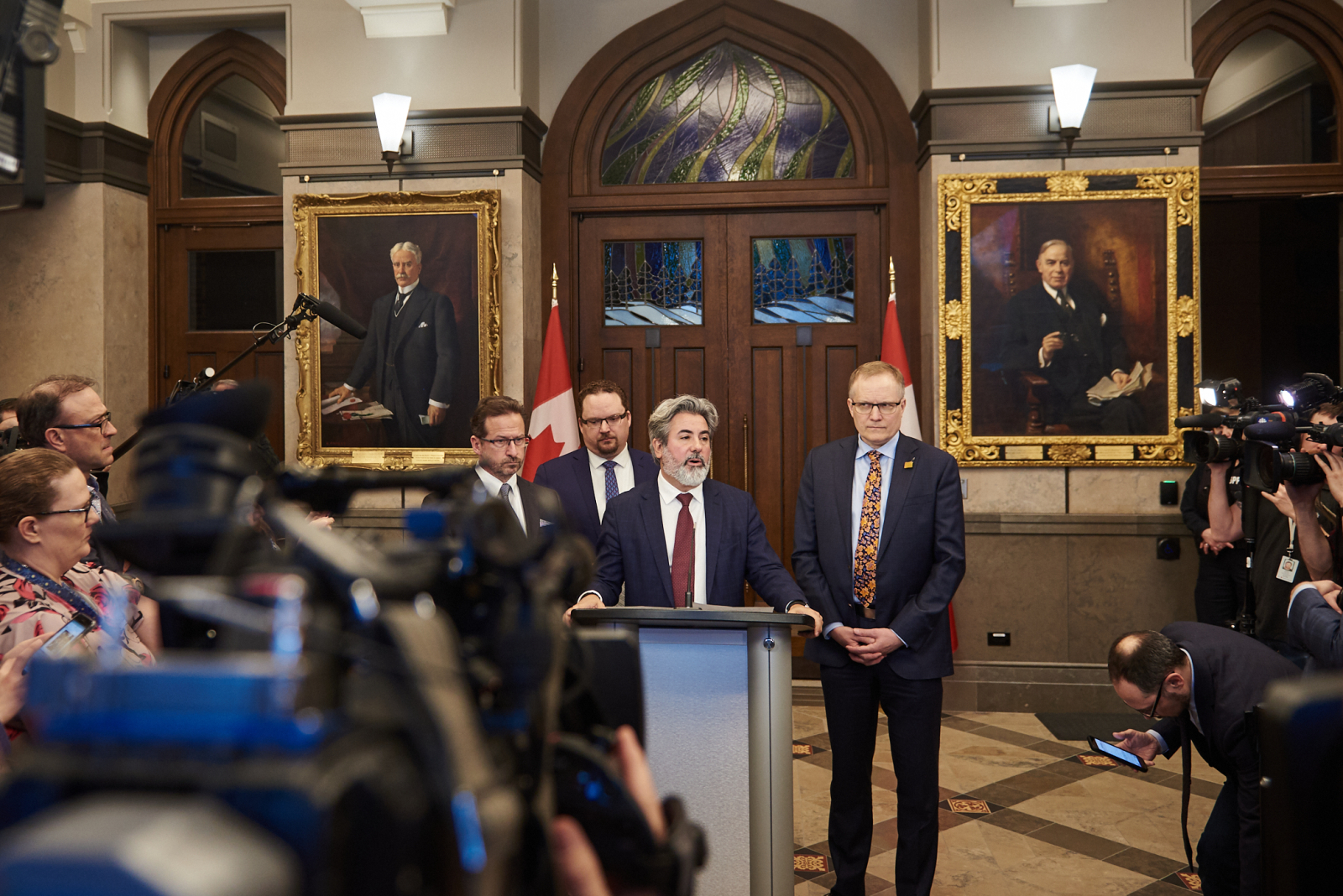 Paul Manly stayed overnight in the Vancouver airport and wore a face mask during his birthday on a flight to Ottawa, where he rose to deliver a speech in Parliament that argued he shouldn’t be there.

The Green MP from Nanaimo—Ladysmith was one of only three B.C. members who stood for a key vote on Monday in the House of Commons, along with Bob Zimmer, the Conservative MP for Prince George—Peace River—Northern Rockies and NDP Leader Jagmeet Singh, the MP for Burnaby South.

The vote, on a Liberal government motion, established that future House sittings would be held once a week in person, with additional “virtual” sittings to come, as a way of balancing parliamentary duties with caution over the novel coronavirus.

The Conservatives had argued for more in-person sittings, but their motion was voted down. Manly suggested that even the single sitting on Monday, where the vast majority of the 37 MPs present for the vote hailed from ridings in Ontario or Quebec, violated the rights of his colleagues.

In Atlantic Canada, for instance, provinces are under quarantine orders. If Jenica Atwin, the Green MP for Fredericton, N.B., travels out of the province, for example, she would have to self-isolate for 14 days from her husband and children upon her return.

MPs had previously agreed in mid-March that they would return on Monday, April 20. But at that point, no one understood the true scale of the pandemic, Manly said. He called on the Speaker to adjourn the House immediately out of a sense of caution.

“I submit that the date April 20 was a mere placeholder,” he said. “No one knew on March 13 what living with a pandemic meant. We knew nothing of flattening the curve. Now we do.”

Most of the time Monday was spent debating how the rights and privileges of members to gather for Parliament can still be respected while keeping everyone safe and respecting physical distancing measures.

Singh had also argued that MPs that live in regions far from Ottawa would not have a voice without virtual settings. “People who are in B.C., in my home province, who are now unable to come to Ottawa...their voices need to be heard,” he said.

Paul Manly stayed overnight in the Vancouver airport and wore a face mask during his birthday on a flight to Ottawa, where he rose to deliver a speech in Parliament that argued he shouldn’t be there.

Chief Public Health Officer Dr. Theresa Tam said her advice to parliamentarians would be similar to other workplaces where there are essential services: practice physical distancing, ensuring people don’t go to work if they’re sick and washing hands frequently.

“Many workplaces of course have done teleworking and others just to reduce the amount of mixing in order to maintain the physical distancing as well,” she added. “I think Parliament, like other essential workplaces, needs to have a plan to make sure all of these measures are implemented as they are having their meetings.”

Green Party parliamentary Leader Elizabeth May, the MP for Saanich—Gulf Islands, said in an interview with National Observer that she believed it was completely possible to hold the government to account while meeting virtually.

“We’ve done it before,” she said, pointing to issues with the government’s Canada Emergency Response Benefit that opposition MPs had raised.

She also said there are daily calls, seven days a week, with departmental officials, and she has a biweekly call with Finance Minister Bill Morneau on behalf of the Greens.

“If we add to that a Zoom Question Period session, or several a week, I think we absolutely have the same degree of accountability,” May said.

“It’s quite outrageous to insist, as the Conservatives are, that the only way to hold the government to account is to meet physically.”

May said it was clear that the House of Commons couldn’t function entirely normally with physical distancing. As an example she said the table officers, who assist in the functioning of Parliament and sit in the middle of the chamber in front of the Speaker, simply weren’t afforded the space necessary to practice distancing.

The Green MP has been self-isolating after she flew on a government aircraft from B.C. to Ottawa to attend an earlier session of Parliament, one that ended up stopping to pick up Conservative Leader Andrew Scheer and six other members of his family in Regina. Scheer argued later that he and his family “kept our distance” during the flight.

On Monday, Scheer said that Conservatives wanted “more than the one accountability session per week,” suggesting he felt the virtual sittings being proposed were insufficient to hold the government to account.

The government should have been looking into what kind of public health requirements are needed to keep Parliament open, he said.

“It’s normal for the House to sit. We need to show that we can have MPs in the House that can respect all the guidelines, and we have done that, twice,” Scheer said. “We don’t need all staff on the Hill.”

The Procedure and House Affairs committee is expected to present a report on virtual sittings next week, and the House is expected to undergo some technological upgrades, he noted.

“I have no doubt that we have the ability to do what the NDP’s been proposing, what Jagmeet Singh has been proposing from the beginning,” Julian said. “We will be improving on the baseline, but I have absolutely no question that we will have the capability.”

Trudeau told media Monday that he felt Canadians understood that it was important, “not despite the crisis, but because of the crisis” to continue to sit as a Parliament but “look for ways to do it responsibly.”

“I am very confident that today we will be able to agree on an approach that will both ensure the continuity of our parliamentary institutions during these difficult times, but to do so in a responsible manner.”

All provinces are not equal in COVID-19 response and recovery

Where were these Cons when

Where were these Cons when Heir Harper porogued Parlement?

Now that everyone sees the

Now that everyone sees the value of science, why not get an opinion from an expert? Oh wait - one has spoken! It's Dr. Tam, who has stated that as long as the criteria are followed - distancing, staying home if one is sick and handwashing - carrying out essential duties is permissable.

If the Cons were in power...

I am wondering if the thing

I am wondering if the thing that bothers the Conservatives is the security of the technology that would be used for virtual parliament sessions. I recall that the Blackberry had the reputation of being the most secure phone system. That was Canadian technology. Isn’t this an opportunity to make something similar?

I am incredulous that Andrew

I am incredulous that Andrew Scheer and the Conservative Party continue to live in the dark ages. There is absolutely no reason that Parliament can’t meet virtually and still ensure that Democracy prevails. Parliamentary members meeting in person 3 x a week is socially irresponsible and violates most of the health directives issued during this Pandemic. By meeting in person, Parliamentarians are stressing and wasting resources and risking theirs and others safety. E.g. They are travelling from all parts of the country, airlines are having to accommodate them, have extra cleaning and staff on board, Parliamentary chambers would have to have extra staff for administrative, security, transportation, cleaning etc. duties.
There is the risk of transmission when MPs return to their constituencies.
Make technology work in government and get members up to speed to live in the 21st century. This needs to be the New Normal well after the Pandemic. Canadians across the country are doing it. Surely our MPs can too.