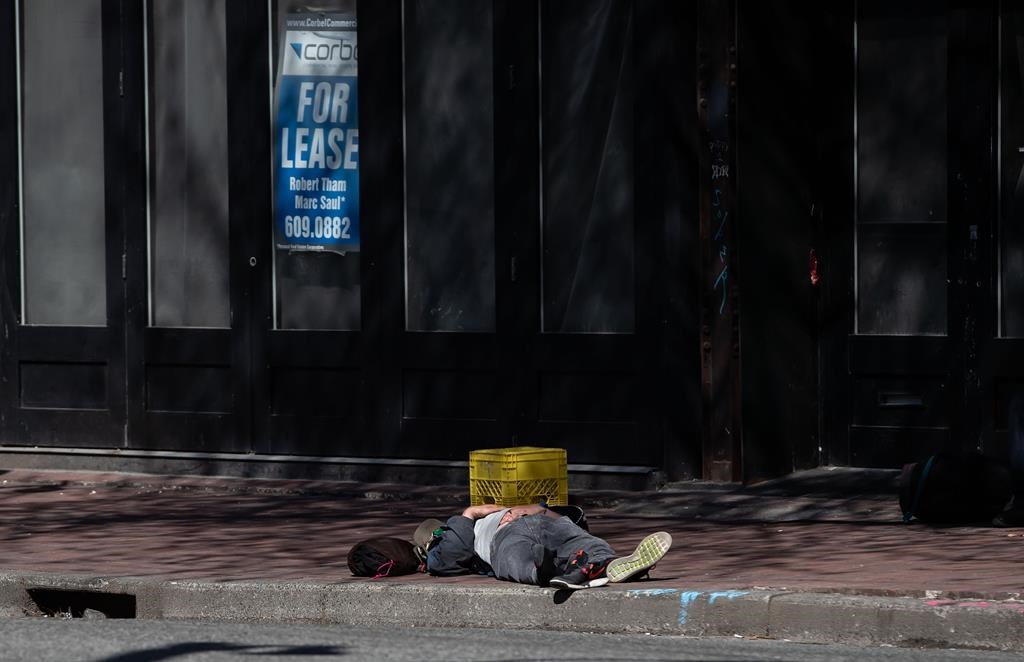 A man sleeps on a sidewalk in the Downtown Eastside of Vancouver, on Sunday, April 12, 2020. File photo by The Canadian Press/Darryl Dyck
Previous story
Next story

The federal government should consider rent relief for the precariously housed, or risk a wave of Canadians becoming homeless in the wake of COVID-19, advocates told MPs Friday.

Prime Minister Justin Trudeau announced this week the federal government would work with the provinces and territories on a program that would help commercial landlords reduce or eliminate the rent for small businesses until June.

Veronique Laflamme, with the Montreal-based group Front d'action populaire en reamenagement urbain, told the House of Commons finance committee Friday that Ottawa should consider similar relief for people who may not be able to afford their housing.

"Our group is getting a lot of calls from renters who are worried about losing their housing," Laflamme said. "These very low-income people are having trouble paying their rent."

Many parts of the country were already in the midst of a housing and homelessness crisis because of a lack of affordable housing options, she said, and now people who were living paycheque to paycheque have lost income because of the economic shutdown.

While the $2,000-a-month emergency response benefit has helped many people afford basic necessities and rent payments, it isn't enough for everyone, other advocates said.

"We can see a wave of evictions coming because of the financial hardship," said Dan Clement, president of United Way Centraide Canada.

"Fundamentally what we need to do is make sure we keep Canadians housed," he said.

That can be complex, said Cecile Arbaud, executive director of Dans la rue, which works with homeless youth in Montreal.

For example, youth in foster care have been kept from aging out of the system in an effort to keep them off the streets. But she said the current conditions make it nearly impossible for them to plan for employment or a place to live once the pandemic is over, which puts them at risk of homelessness.

Clement said the pandemic has highlighted the existing gaps in Canada's social safety net, which will need to be addressed.

Shelter providers described some of the serious challenges involved in helping those who are already homeless during the crisis. Many live in crowded emergency shelters, where people it's difficult to isolate from each other.

Some cities have opened emergency spaces in hotels, churches, conference centres and recreational facilities to try to give people without a home a space where they can stay away from others if they show symptoms of COVID-19.

But many services those people rely are shut down or operating at a reduced capacity, the committee heard.

While the need to keep people from becoming homeless is urgent, the government should also look to "pandemic-proof" the social infrastructure in Canada for the future, said Maureen Fair, the executive director of West Neighbourhood House, a social services provider in Toronto.