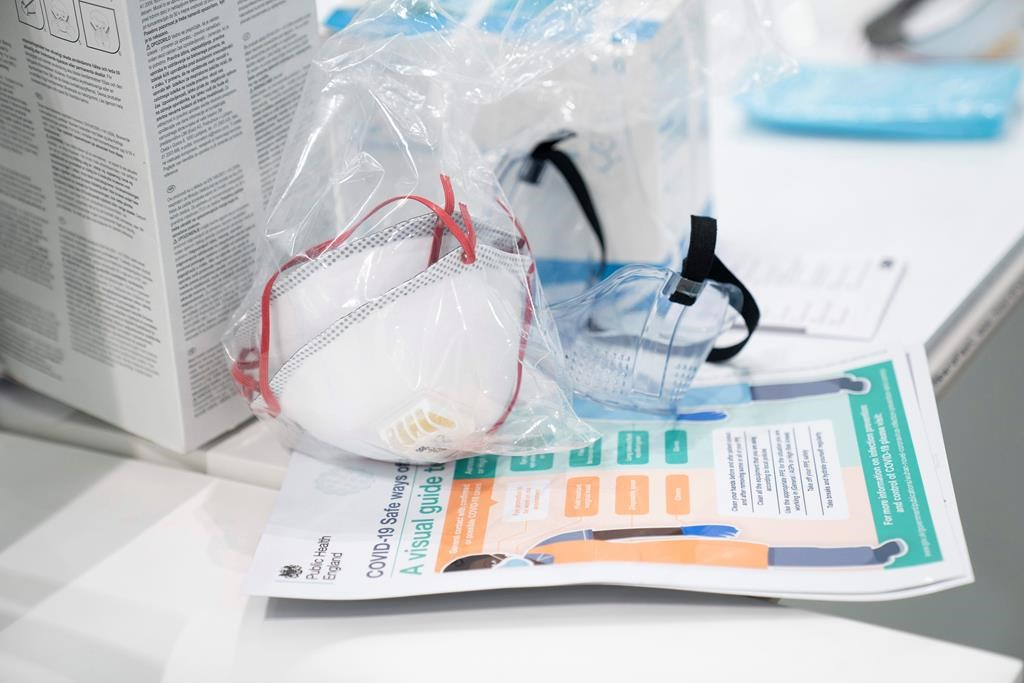 Some primary-care doctors say they still have no line of sight on when they will get much needed protective equipment, and they are starting to run critically low on supplies. Photo by The Associated Press/Jon Super
Previous story
Next story

Even as planeloads of supplies to protect Canada's medical workers arrive, many primary-care physicians say they are in the dark about when they're going to get what they need to keep helping patients.

Global shortages of surgical masks and disposable N95 respirators have put Canadian medical workers under pressure to conserve what little they have left.

Despite those efforts, some say they are likely to run out.

"There are definitely some practices, if they haven't already run out of (personal protective equipment) they will soon," said Dr. Allan Grill, a family physician in Markham, Ont.

That could mean some clinics will be forced to stop seeing patients, Grill said, which would leave those patients with no choice but to report to emergency rooms or put off their care.

Federal and provincial governments say they've left no stone unturned in their efforts to get more of the supplies into Canada, and shipments have started to arrive. Even so, some doctors have no idea when they'll actually get their hands on them or how they'll be allocated.

Supply stocks vary province to province, since each is responsible for its own. The federal government has been taking requests for large orders, for greater purchasing power abroad.

All provinces with the biggest outbreaks, including Alberta, British Columbia, Ontario and Quebec, have reported challenges this past month, as they attempt to tally what's available. As shipments come in, they are delivering them to where they're needed most.

But medical settings outside of hospitals, typically responsible for purchasing their own supplies, are struggling, said Dr. Sohail Gandhi, president of the Ontario Medical Association.

"All I've been hearing is how difficult it is," he said.

The issue of N95 respirators is especially contentious. Federal and provincial guidelines suggest doctors only need to use them in certain situations, such as when a patient is on high-flow oxygen. Otherwise, the guidelines say surgical masks are enough to protect against the transmission of COVID-19.

Doctors don't know when masks are coming, despite deliveries arriving in Canada

But nurses' unions across the country have called for more liberal use of the N95 masks as an added precaution, and some doctors feel the same.

"We're getting very close to our patients, we can't assess our patients from six feet away," said Gandhi.

"If I'm going to go into an environment where there are people who are presumed to have (COVID-19), I'd want to wear an N95 in those circumstances," he said.

While he's heard about federal and provincial efforts to get more of the masks into Canada, he said he has no clear idea of where those supplies are or when they're coming to clinics.

Add to that, warnings from the federal government about fraudulent and non-certified N95s found in the marketplace, leave doctors with little choice but to wait for quality supplies.

It can be especially upsetting when doctors go to the grocery store and spot people in medical-grade masks, he said.

"It's taking gear away from medical professionals who really need it," he said.

The public have been urged to use non-medical masks if they choose to cover their face out in public, and consider donating medical supplies to hospitals and other health-care units.

"We are operating in an era of high global demand," Anand said Thursday.

She described the supply chain as complex and strained under the pandemic conditions.

"We will not stop until we have the supplies that Canadians need," she said.