House of Commons to re-open today amid COVID-19 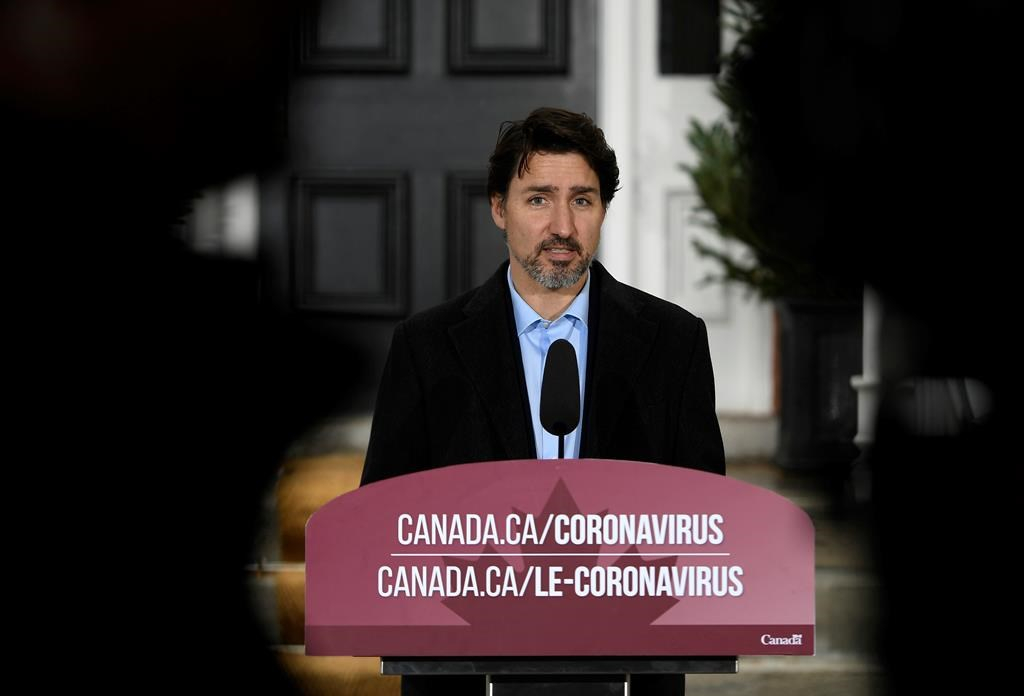 Prime Minister Justin Trudeau speaks during his daily press conference on COVID-19, in front of his residence at Rideau Cottage in Ottawa, on Sunday, April 19, 2020. Photo by The Canadian Press/Justin Tang
Previous story
Next story

The House of Commons is poised to re-open today despite the COVID-19 pandemic thanks to an impasse between the four main political parties.

The Liberals announced Sunday that they had an agreement with the NDP and Bloc Quebecois to have 32 MPs meet in the House in person each Wednesday starting this week, with up to two virtual sessions also added for MPs to ask questions of the government.

Prime Minister Justin Trudeau told reporters it would be "irresponsible" to resume parliamentary sittings at a time when health experts are urging Canadians to limit their movement and work from home as much as possible to prevent the pandemic from spreading.

The House of Commons has already moved some business online with two parliamentary committees conducting hearings by video conference. The British Parliament is also poised to adopt a hybrid approach in wich some MPs will grill ministers in person while others participate online.

But Conservative Leader Andrew Scheer rejected the proposal, suggesting there remained many unanswered questions about holding a virtual sitting of the House of Commons and insisting on three in-person sittings per week.

Negotiations were still underway Sunday evening, but all four parties needed to agree to prevent the House from officially resuming on Monday. The question then will be how many MPs show up and what they will discuss.

The government had suggested that if an agreement wasn't reached, the House of Commons would resume business as usual with all 338 MPs and their staff, along with Parliament Hill clerks, interpreters, security and cleaners, returning to work in Ottawa.

Scheer, however, noted only 20 MPs need to be in the House for a sitting. He has accused the Liberals of misleading Canadians to put pressure on Opposition parties to accept fewer in-person sessions to hold the government to account for its pandemic response.

Except for two single-day sittings to pass emergency aid bills, Parliament has been adjourned since mid-March. Those two sessions were held with a limited number of Parliament Hill staff, which Scheer said could be easily replicated to prevent the spread of COVID-19.

The NDP was preparing to have three MPs, including Leader Jagmeet Singh and deputy leader Alexandre Boulerice, in the House of Commons on Monday if a deal could not be reached.

The political wrangling in Ottawa came as provincial health authorities reported at least 117 more deaths from COVID-19, bringing the national total to 1,587.

Yet while Ontario and Quebec also reported hundreds more positive tests, bringing the national total to more than 35,000, New Brunswick as well as Newfoundland and Labrador reported no new cases.

This report by The Canadian Press was first published April 20, 2020.

Will House of Commons re-open?

"Playing Politics" comes to mind. Sheer represents the political persona that is easily bored, requires constant press attention and has an inflated sense of importantce.

It is high time for Paarliament to experiment with the new technologies available that might well decrease the costs of parliamentary work, travel, housing allowances etc. The globalization of industries and transnational businesses are already employing such technology. If it is as successful as it seems, there is no excuse for politicians not to make use of it.

Certainly, fave-to-face meetings may be required but I imagine snark, outrage, grandstanding will easily be possible on-line.

Why is it that idiocy comes

Why is it that idiocy comes from the Republicans in the US, the Conservatives in Britain (you can see how well they are doing), Conservatives in Sweden, and Conservatives in Canada? What is it about the right end of the political spectrum that makes them seem to think they know more than ANYONE, including medical experts who have given not four years, but twenty, thirty, forty years of their lives to their craft? From silencing science under Harper, to this latest crazy demonstration, do they have no capacity to learn?

From the Canadian Press

From the Canadian Press article redistributed by the National Observer*, as a new first time subscriber, I am disappointed so many hard-hitting truths were left concealed in the following half-truth "Negotiations were still underway Sunday evening, but all four parties needed to agree to prevent the House from officially resuming on Monday".

Since a smaller House can only be agreed upon through unanimous consent, why not simply and plainly state all parties agreed, except those represented by Scheer?

Or more pointedly, why not put all the cards on the table and note that though a majority of Cons are anxious to dump Scheer, in the interim, for strictly self-serving political calculations, not a single one was willing to break ranks with Scheer and thereby stand up and be counted in support of Canada's social distancing strategy and require fewer MPs to crisscross Canada?

And the collateral damage, not to mention the Con's hypocrisy?

By refusing to authorize a smaller House session each and every Con was essentially putting all other MPs into the perverse situation that if they chose to support social distancing strategies "as we're all in this together" to then lose their voice as an elected MP!

* National Observer's newsletter contains the following words "We are committed to producing journalism that is accurate, fair and complete, and our journalists strive to act with honesty, transparency and independence, including from conflicts of interest."

In view of such a journalistic standard, would it then not be appropriate to point out the Con's further hypocrisy? Here is a minority they stand on their right requiring unanimity, regardless of the impact on the majority of MPs, not to mention all of Canada's social distancing costs being undermined, but when they will elect their leader, they demand such a leader must have the confidence of the majority of the party membership voter. But refuse to extend this democratic rule of fairness to mere Canadians where in the 2019 general election all of 224 of the 338 MPs declared elected did not have the confidence of the majority of their own electorate.

That's right! In 224 districts the majority of voters that voted now have as their MP someone for whom they did not vote! The Cons do not tolerate this situation internal to their leadership elections but hypocritically lose no sleep over disenfranchising the majority of Canadians this way.

However through a voluntary community self conducted pre-election Vote123 poll, with this information on election day we the people could elect whoever we wish and thereby avoid the yellow dogs John Diefenbaker was so boastful of.