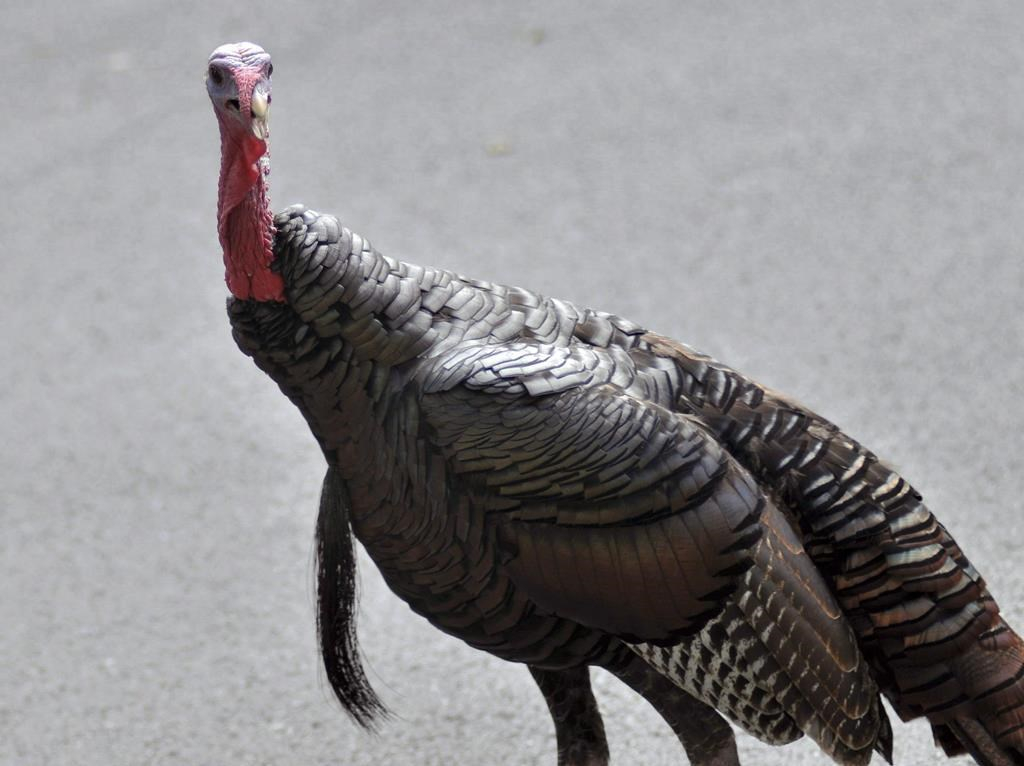 A wild turkey walks through a residential neighborhood in Brookline, Mass. on Sept. 27, 2017. File photo by The Associated Press/Collin Binkley
Previous story
Next story

When Josianne Plante looked out her window on a recent morning, she was surprised to see a pair of large, bare-headed wild turkeys going for a stroll through her east-end Montreal neighbourhood.

"They were just walking down the street and sidewalk like nothing was happening," the Pointe-aux-Trembles resident said in a recent interview.

With countries around the world on lockdown due to COVID-19, many people have been reporting seeing more wildlife, and Canada is no exception.

David Rodrigue, the executive director of the Ecomuseum Zoo in Ste-Anne-de-Bellevue, Que., says there has been an uptick in sightings of common urban species such as skunks, raccoons, white-tailed deer, rabbits and foxes in the greater Montreal area since the pandemic began.

"That lessens the pressure of disturbance on those animals, who seem to be wandering more," he said.

Rodrigue said that for the most part, the animals being noticed are those which were already present in the city, although the turkeys are an exception.

"They're a very wary species and they're hard to approach," he said.

"That some of them came into an urban setting speaks volumes about the effect of fewer people walking around."

Perhaps surprisingly, coyotes, which have grabbed headlines in Montreal in recent years, haven't been sighted in higher numbers. The most frequently spotted? Rats.

Increased sightings of wildlife have been occurring all across Canada, according to James Page of the Canadian Wildlife Federation.

Page said there were 15,000 new sightings reported in the first days of April at inaturalist.ca, an online database that allows citizens to input their plant and animal observations, compared to 9,500 for the same period last year.

But Page, a species at risk and biodiversity specialist, says it's too early to talk about a "re-wilding" of cities or of nature bouncing back.

He said that while animals are probably more visible, part of the increase is likely because people are staying home due to the pandemic, and therefore are more likely to spot wildlife.

Marie-Eve Muller, a spokeswoman for the Quebec-based Group for Research and Education on Marine Mammals, said it's too soon to know if a reduction in boat traffic could have a positive impact on marine mammals.

She said shipping traffic in the St-Lawrence River hasn't diminished so far, but a reduction in pleasure boats and whale-watching could be beneficial to whales, which are known to be disturbed by engine noise and vibrations.

Both Page and Rodrigue said it remains to be seen whether there will be a lasting effect on animal populations.

In the short term, they say less disturbance during breeding season could allow some species to raise larger litters, while a reduction in vehicle traffic could reduce fatal collisions.

But Page said that the human impact on animals is still enormous, including from roads and dams that cut through their habitats.

But both experts say that seeing wildlife can offer people a rare bright spot in a difficult time, and give us a small glimpse of what the world could looks like with better cohabitation.

"Maybe it can give us a pause to think about our relationship with nature and what it could look like, going forward," Page said.

This report by The Canadian Press was first published April 19.