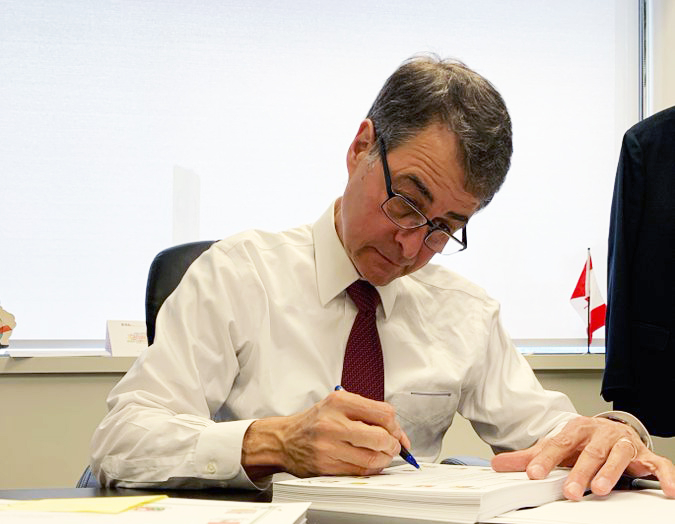 House of Commons Speaker Anthony Rota said Tuesday he’s not yet “comfortable” with remote voting technology, and doesn’t see it happening in the “near future,” as MPs scramble to come up with a way to hold virtual sittings during the coronavirus pandemic.

Rota, a Liberal member of Parliament from Northern Ontario who was elected Speaker of the House in December, first raised the issue of remote voting himself in comments to the Procedure and House Affairs committee, which met by video conference on April 21.

Remote voting could be a possible long-term goal for MPs, Rota said, if they were to start with more straightforward objectives such as establishing the ability of members to give a statement virtually, and then “gradually expand” the proceedings covered “as far as remote voting, should circumstances require it and the House approve it.”

But pressed on the details by Conservative MP Eric Duncan, Rota sounded a note of caution. “Voting is something that we are not — I don't see happening in the near future,” he said. “That’s something that requires some technology that, personally, I’m not that comfortable with yet.”

Rota said it would first require developing “secure systems” that can guarantee all 338 members of Parliament could vote confidently.

Allowing individual members to vote is at the “heart” of Canada’s parliamentary system, Rota argued, and he expressed concern about any virtual configuration where only one or a handful of MPs speak for their colleagues.

“We’ve seen it in other Parliaments around the world, where there is almost a proportional system, where one group, one party, will vote a certain way, and they have a representative who represents all their members,” said Rota.

Defining what 'presence' means in the Constitution

The Procedure and House Affairs committee has been looking into how MPs can fulfil their duties virtually, after being asked this month by the House to examine the issue. MPs are expected to provide a report by May 15 on the way forward.

House of Commons Speaker Anthony Rota says he’s not yet “comfortable” with remote voting technology, and doesn’t see it happening in the “near future,” as MPs scramble to come up with a way to hold virtual sittings

On Monday, after a temporary adjournment of the House that was struck on March 13 expired, 37 MPs met in person in Ottawa and voted for a new plan going forward where they would meet once a week in person, and hold additional “virtual” sittings. The Conservatives had proposed additional in-person sittings but were outvoted by the Liberals, the NDP, the Bloc and the Greens.

The new virtual sittings will be conducted via a new body established by the House called the “Special Committee on the COVID-19 Pandemic,” that counts all 338 MPs as members.

This committee, set to meet next Tuesday, is expected to exercise oversight of the government by providing a virtual venue to question the prime minister and cabinet members on their ongoing coronavirus response.

But, to Rota’s point, not all 338 members are likely to virtually appear for this committee meeting, House of Commons Clerk Charles Robert predicted. “It will be far short of the entire membership of the House,” he said.

One advantage of using a fresh committee as the body to conduct oversight, rather than the House itself, is that it is not subject to the most obvious legal constraint on Parliament operating virtually: the quorum requirement in section 48 of the Constitution.

The Constitution demands the “presence” of at least 20 MPs, including the Speaker, in order to hold a “meeting of the House for the exercise of its powers.” It also underlines how French and English are the official languages of Parliament and can be used by any person during debates, under section 133, and sections 17 and 18 of the Charter of Rights and Freedoms.

A committee meeting is not subject to the section 48 quorum requirement, so it avoids the constitutional hurdle. As a result, Rota described the COVID-19 committee as fulfilling a “quasi-parliamentary duty” in the moment, while MPs continue to examine longer-term solutions.

Philippe Dufresne, law clerk and parliamentary counsel for the House of Commons, said that moving forward, the House could adopt new standing orders that would give a “modern and contextual interpretation” of the term “presence,” or it could also pass an amendment to the Constitution that specifies that a virtual presence is allowable for the purposes of counting quorum.

He said Canada’s courts have repeatedly affirmed that the House of Commons has flexibility in deciding how to manage its internal proceedings, and that the Constitution is seen as a “living tree,” so the House would likely not be stymied by legal concerns if it agreed to change how it conducts its business.

Between its March 13 temporary adjournment and the new plan reached on Monday, the House had met twice, on March 25 and again on April 11, for emergency sessions to pass government legislation that enacted COVID-19 relief measures.

During this time, standing committees have been meeting virtually, with mixed results. Some MPs have expressed dismay during committee meetings that the proper technology isn’t in place or working to their satisfaction, while others have portrayed it as merely kinks to be worked out over time.

Rota said he was “keenly aware” of the impact the pandemic was having on the ability of MPs to participate, noting that some members “are not tech-savvy, let’s say...it’s a small minority, but they have the same rights as everyone else, and those rights have to be respected.”

He suggested three “guiding principles” for any virtual parliamentary model: that it would uphold the rights and privileges of members; that there be simultaneous interpretation in English and French, with some facilitation as well for Indigenous languages; and that the wide range of internet service available across the country does not hinder the ability of members to participate, particularly in rural areas.

On Monday, both NDP House Leader Peter Julian and Green Party parliamentary Leader Elizabeth May told National Observer they had confidence that the House can conduct proper oversight of the government virtually.

But MPs from all parties have also raised concerns about the ability of members in rural or remote areas to have their voices heard, particularly if they are not on stable or powerful enough internet connections.

NDP Whip Rachel Blaney, the MP for North Island—Powell River, said one of the challenges with her own riding is internet access. She said it depends on where she is at any given time.

“There are multiple airports in my riding, for example, that do not have good access to internet,” she said.

Blaney asked Robert, the House clerk, if there would be any data collected on ridings where there are concerns with internet access for MPs. “It certainly would make my constituents happy to have that officially on the record,” she said.

Robert said it was his understanding that the House administration was looking into that issue. “I suppose once we collected the data, there would be no reason why we couldn’t share it,” he said.

Blaney also asked why the House administration was considering Zoom, the videoconferencing service, rather than another service. Robert said security issues, and the service’s ability to allow for multiple languages simultaneously, were factors in the decision.

Amazing, the European Union, (32 independent countries), can figure our voting remotely, but our Canadian Parliament can't? It is only lack of will. Maybe we need another new speaker. SAD!
It is ridiculous having parliament sit during this crisis when they are asking us to stay at home. The best outcome of this pandemic is that we don't have to listen to the Political Parties bickering about everything and not answering questions