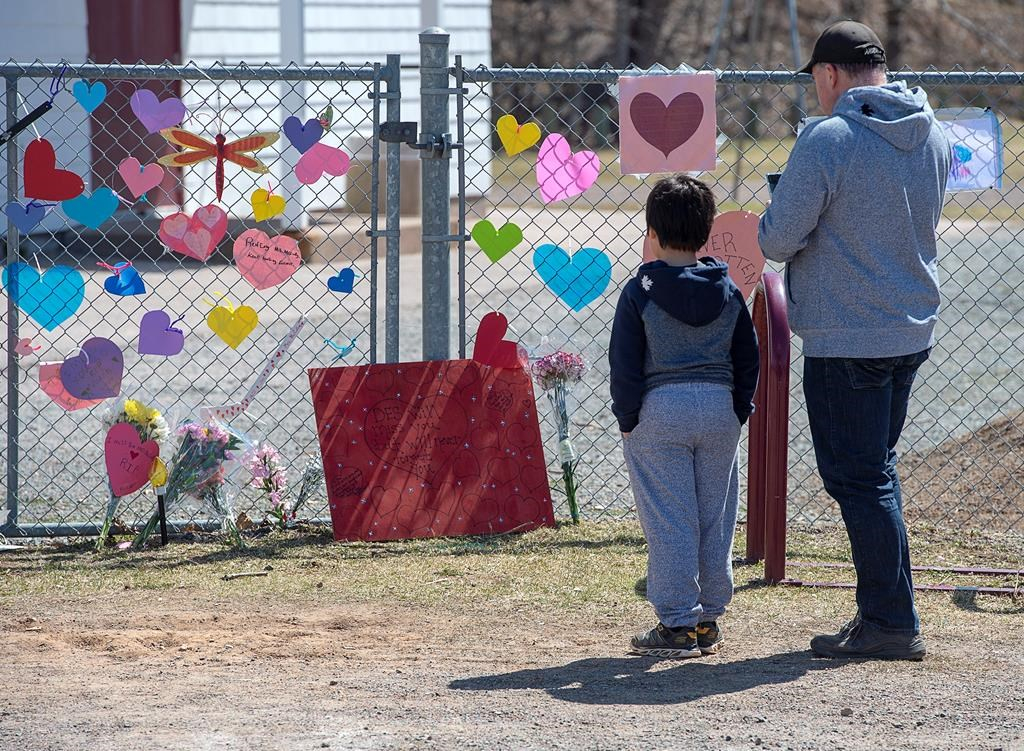 A man and his son pay repects at a memorial to Lisa McCully, a teacher at Debert Elementary School in Debert, N.S. on Tuesday, April 21, 2020. Photo by The Canadian Press/Andrew Vaughan
Previous story
Next story

A murderous rampage by a Halifax man impersonating an RCMP officer has claimed 22 lives, police announced Tuesday as some questioned why more wasn't done to warn citizens along his route.

The RCMP confirmed in a news release that the killing began in Portapique, N.S., and when police arrived Saturday night they discovered several casualties inside and outside of a home. The killer's trail continued overnight and into the next morning through Wentworth, Debert and Shubenacadie before he was shot dead by police in Enfield at around noon Sunday.

When it was over, there were 16 different crime scenes.

During that time, the RCMP provided Twitter updates. But no public agency issued a public emergency alert that automatically pops up on all smart phones and televisions — even though the provincial alert system had recently been used to advise people to maintain physical distancing because of COVID-19.

David and Heather Matthews were out for a stroll in a wooded valley in Wentworth on Sunday morning when they were confronted with a choice: They could walk down the road on Highway 4, or go down a trail.

"I just didn't have a good feeling about something," David Matthews recalled in a phone interview. "I said, 'I'm not going down the road.'"

About halfway along the trail, the couple heard a "pop," which they said sounded like it could be a gunshot, or perhaps just a car backfiring.

Shortly after the Matthews returned home, their phone started ringing with warnings from friends that there was an active shooter on the loose in the neighbourhood. They later learned that a fellow walker was gunned down that morning on a road nearby.

"If I had gone down the road, he probably would have shot us," said David Matthews.

"In my mind, there should have been some provincial alert ... (that) you've got to be careful, because there's an active shooter in the area."

From Wentworth, the precise route of Gabriel Wortman — identified by police as the killer —remains unclear, but police have said he targeted people he knew and others he did not know.

Number of N.S. victims hits 22, as some ask why emergency alert wasn't used

The RCMP has said the 51-year-old denturist continued to evade his pursuers in part because he was wearing an "authentic" police uniform and driving a vehicle painted to look exactly like an RCMP patrol car.

Eyewitnesses said he made his way to Shubenacadie, N.S., a community about 50 kilometres northwest of Halifax off Highway 102.

It was in Shubenacadie that onlookers took photographs and video that show what looked like two RCMP vehicles on fire and a body on the ground. Const. Heidi Stevenson was killed in the rampage and Const. Chad Morrison was wounded but has been released from hospital.

From Shubenacadie the shooter headed back towards the highway. A municipal councillor, Steve Streatch, has said that a young father, Joey Webber, was also killed in that area while running a family errand.

Cheryl Maloney, a resident of a highway leading into Shubenacadie, said her home was along the killer's route, between the scene where the burning cars and the body were filmed and a location where Gina Goulet, a 54-year-old denturist, was murdered at her home.

Maloney said her son messaged shortly after 11 a.m. to say: "Don't leave your house. This guy is at the end of your road and he's dressed like a cop."

The former leader of a group that represents Mi'kmaq women said, "I really could have used that provincial warning, as I walk here all the time and I've been in the yard all week."

The RCMP have said they shot and killed Wortman at an Enfield gas station, by which point he had changed to a silver sport utility vehicle. RCMP include his death in their account of 23 total victims.

When asked Monday during a news briefing why a provincewide emergency alert wasn't used, Chief Supt. Chris Leather said: "It's a good question, and I don't have an answer for you at this moment." The RCMP did not hold a briefing and offered no further comment on the issue Tuesday.

Premier Stephen McNeil said the province's emergency alert system was ready to go but wasn't used because no request was received at the Emergency Management Office from the RCMP.

"We had staff on hand in the morning to be able to do that, but it was not requested," he told reporters.

"I would say (with) the benefit of hindsight, the depth and breadth of this should have been communicated more widely with a number of our agencies," he said. "But let's let that unfold. My main focus right now is to support those families."

Josh Greenberg, a professor of journalism and communications at Carleton University, said the alerts are intended to reach people who are at imminent risk.

"We already know that Nova Scotians received an emergency notification about the risk or coronavirus less than two weeks ago (April 10), so there's no reason why officials would not use this platform again," said Greenberg, who studies crisis and risk communication.

Twitter, he said, "cannot wake you in the middle of the night or early morning to warn you that there is a mass shooter at large, your life may be at risk and to lock your doors and seek shelter."

The death toll rose Tuesday as fresh information emerged about Wortman's previous involvement with the police.

Nova Scotia court records confirm he was ordered to receive counselling for anger management after he pleaded guilty to assaulting another man in the Halifax area on Oct. 29, 2001. The documents say the guilty plea came on Oct. 7, 2002, as Wortman's trial was about to begin.

He was granted a conditional discharge, placed on probation for nine months, ordered to undergo counselling, fined $50 and told to stay away from the victim. He was also prohibited from owning or possessing a weapon, ammunition or explosive substances.

In a news conference earlier this week in Ottawa, RCMP Commissioner Brenda Lucki said investigators were looking into "various firearms" that were used in the crime. She also told The Canadian Press, "the subject in question was not well known to police."

— With Files from Michael MacDonald in Halifax and Kevin Bissett in Fredericton.

"The precise route of Gabriel

"The precise route of Gabriel Wortman — identified by police as the killer —remains unclear"
How can you send out a meaningful alert if you don't know where the shooter is or where he is headed?