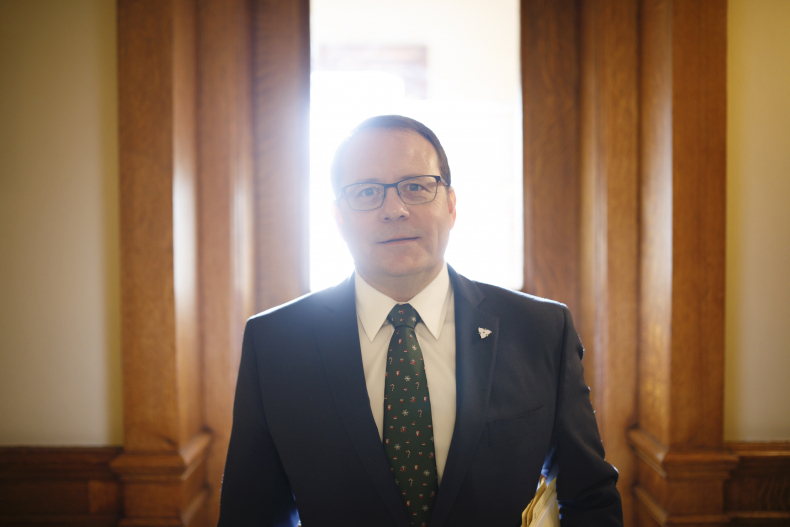 I normally celebrate Earth Day by planting trees, picking up litter and taking part in a big public action.

Not this year, as most of us shelter indoors.

But perhaps a somber, personal reflection is exactly what we need for the 50th anniversary of Earth Day.

Physical distancing has forced a personal reality check for many of us, as we think about what really matters in life and the balance we might have lost along the way.

Some are thinking about their fast-paced, high-carbon lifestyles, especially as wildlife returns to places that have been vacated by big crowds.

And as we start to plan for the reopening of our economy, we should think about what will sustain us in the future and what is best left in the past.

The truth is that the pre-covid economy was in need of a reboot to tackle the climate crisis.

But nothing had shocked us into action - not the pleas from scientists nor the shocking wildfires in Australia.

Now we are at a crossroads that was forced upon us by the pandemic.

It’s a once-in-a-lifetime chance to jumpstart the economy that we want - a bridge to a more hopeful, sustainable and prosperous future.

The federal government made a good start by announcing funding for the clean-up of abandoned oil wells last week.

"The truth is that the pre-covid economy was in need of a reboot to tackle the climate crisis."

Clean energy already employs 300,000 Canadians and is projected to grow at four times the Canadian average by 2030.

An aggressive shift towards energy efficiency and retrofits would create hundreds of thousands more jobs, while making us less dependent on the plummeting price of oil.

We could help people with loans to insulate their homes and install solar panels on their roofs, while offering grants and tax breaks to the entrepreneurs developing clean technologies.

We can once again make Ontario a manufacturing hub by turning our attention to the low-carbon sectors that are on the rise.

A recent study showed that with a robust electric vehicle strategy, Canada could create 1.1 million jobs by 2040 and add $150 billion to the economy.

We have many of the rare earth metals in Ontario’s North needed to produce EV and storage batteries. They can be sustainably mined creating an Ontario supply chain to electrify transportation.

And let’s install chargers across our provincial highways to get us ready for this electric vehicle revolution.

We can also make our communities more resilient to the climate impacts that are inevitable, from harsh droughts and rising flood waters.

One of the cheapest and easiest solutions is tree planting, which buffers the impacts of extreme weather. Canada’s goal of planting 2 billion trees in 10 years is nice, but last year Ethiopia planted 350 million trees in a single day.

Let’s also use this pandemic to make our food system less vulnerable to the next shock.

Family farmers who grow our fruits and vegetables should have access to financial support to stay in business, as well as local processors to preserve their harvest.

We should upgrade our grain storage infrastructure to prepare for the next emergency.

And we should invest in technologies to convert some of our food and agricultural waste into renewable energy and bio-based products.

The point is that the billions we spend today should make good economic sense - not just tomorrow, but in 2050.

Certainly there will be a big temptation to go in the other direction.

The fossil fuel industry is already asking for a rollback of pollution controls to help them get back on their feet, while various provinces are halting environmental regulations.

But a race to the bottom would be a mistake.

The recovery cannot be about finding the cheapest, most convenient or short-sighted way to resurrect the old economy.

We have all the motivation needed to choose a smarter path.

And if this pandemic has taught us anything, it’s that when we take a threat seriously and listen to experts, we have the ability to rapidly change our behaviour.

Our collective resolve and solidarity are flattening the curve on COVID-19.

On Earth Day, let’s commit to also flattening the curve on climate change.

Thank you for this and I

Thank you for this and I totally agree.

Everything is right about

Everything is right about this commentary by Mike Schreiner.

"They can be sustainably

"They can be sustainably mined" This sounds to me like an oxymoron. Is this a thing?

EVs are not a green solution

With their huge footprint, EVs wouldn't be green even if they ran on fairy dust. About half of the energy used over the lifespan of a car is expended during its production.
Two-ton single-passenger vehicles carting around 150 lb human beings will never be a sustainable energy equation.
The automobile lifestyle will never be green. No car is compatible with a one-planet ecological footprint.
EVs support the unsustainable urban model underlying our high energy/resource consumption. We cannot solve the paradigm problem simply by replacing internal combustion engines with electric motors.
In promoting EVs, we are still going down the wrong road. Never mind the EV detour. Let's go straight to the solutions. No time to lose.
Sprawl makes efficient public transit impossible. Transit use in many cities is dismal and going down.

No solution to sprawl except to hit the brakes. The decisions we make now set the blueprint for generations to come.
We need to redesign our cities for people, not cars. Invest massively in public transit, cycling and pedestrian infrastructure — and smart urban design that allows people to live close to their place of work and amenities.

So, how do we un-sprawl big

So, how do we un-sprawl big or even mediun-sized cities?

From what I see on the

From what I see on the internet, it has been estimated that Canadian snowbirds spend over 5 billion $Cdn. in Florida every winter, and about 1.5 billion and 1 billion Cdn$ in California and Arizona respectively. Perhaps given all of our government expenditures of late, more of us should try to stay home next winter; especially if we expect to benefit from our country's health care system in our final years, and especially considering the damage the current US administration has done to the planet's environment, and the damages it has exacted on Canadian aluminum and steel producers, aircraft industry, dairy producers, online retailers, etc.

Great idea. My parents go to

Great idea. My parents go to Florida every winter. Unfortunately, my mother has osteoporosis and is rightly terrified of slipping on ice and falling. I've suggested that she and my Dad move to BC, where they'll have the best of both worlds: clear streets and warmer weather on low ground, skiing on high mountains for my Dad. So far, they're not into the idea.

That's Ok, there are ample

That's Ok, there are ample opportunities for Canadian consumers to choose Canadian goods and services over ones from the US.. even before the election in November.

Mike, your article is long an

Mike, your article is long an generalizations and short on details. For example, you say you're for tree planting, clean energy, electric vehicles, and renewables, including bio-based products.

I want to draw your attention to an opposing viewpoint. In the event that you have not already heard about or watched the documentary film "Planet of the Humans," directed by Michigan filmmaker Jeff Gibbs, I highly recommend it.

I have posted the film and accompanying information on my blog under this linked title : subtitle: "Al Gore, Bill McKibben and others sold us out to wealthy interests years ago, for 'green illusions' : Documentary film a shocking wake-up call to the stark reality of human-caused climate catastrophe."

As the film clearly depicts, “we have fallen for illusions, ‘green’ illusions, that are anything but green” – including, for example, so-called renewable solar and wind, clean energy technologies, biomass, and electric cars.

This is a long (1-hr, 40-min) information-rich, evidence-based film that captures scenes of these rogues actually lying to the film’s director, Jeff Gibbs. Personally, I found the film emotionally exhausting. Nothing could have prepared me for the distressing image of the orangutan at the very end of this film.

The film premiered at the Michigan Film Festival in July 2019. It was proclaimed the “The Most Important Documentary of the Century”. Four days ago, on April 21, producer Michael Moore made the film available on his You Tube site. To date, it has already received 1,219,333 views and 12,500 comments.

Anger and action are warranted. I’m damned angry. And I’m going to spread the word about this film among friends, politicians, journalists, environmentalists, and whoever else comes to mind. I encourage all to share it with family, friends and associates. It is particularly important, I suggest, to bring it to the attention of students active in the climate change movement, for they have been so cruelly deceived by these fraudsters.

Sadly, based on my 10 years of blogging, much of it about the existential crises we face, the evidence suggests we have entered terrifying, uncharted territory. I’ve read too many articles based on false hope, especially those promoting simplistic variations of a Green New Deal. It's time to move on to other "real" solutions to the climate crisis.

I have a question.. do we

I have a question.. do we really need helium to celebrate our children's birthdays? I understand that it is a non-renewable resource, yet it is crucial to the operation of some analytical equipment, MRI machines, and nuclear reactors.

..also, I am not an expert, but the pumped storage projects proposed by Northland Power for Marmora, Ontario; and TC Energy for the Meaford military base sound like excellent ideas. The Ontario Society of Professional Engineers gave a couple of presentations here in Thunder Bay in which the desirability of storing energy during times of off-peak demand was mentioned, especially with regards to incorporating renewable generating capacity into the grid.