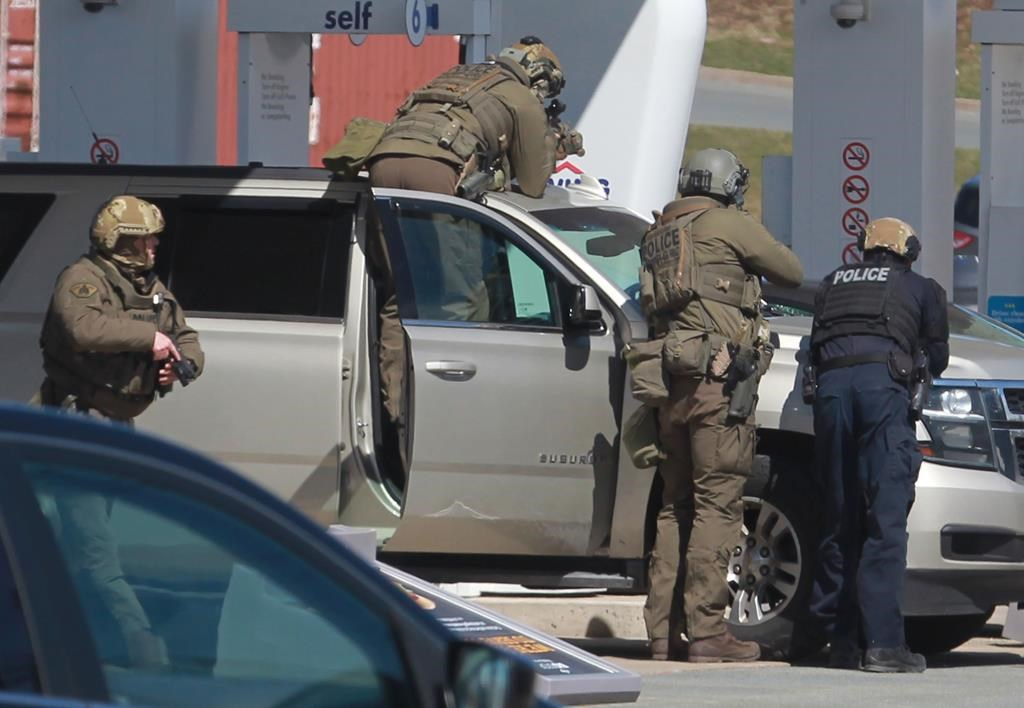 RCMP officers prepare to take a person into custody at a gas station in Enfield, N.S. on Sunday, April 19, 2020. File photo by The Canadian Press/Tim Krochak
Previous story
Next story

Police say the man who went on a murderous rampage through five Nova Scotia communities was likely using unlicensed firearms, and investigators are trying find out how he obtained illegal weapons.

That probe into firearms is occurring alongside a hunt for anyone who helped the killer obtain an RCMP uniform and a replica vehicle he used to deceive his pursuers and the public as he went about killing 22 people and setting fire to homes on the weekend.

Chief Supt. Chris Leather said Wednesday that "we have a fairly good idea that, in Canada at least, he didn't have a firearms acquisition certificate."

It is illegal to own a gun without the proper licence, which federal legislation formally refers to as a possession and acquisition licence.

Leather later said that it's now a key part of the investigation to understand how Gabriel Wortman obtained his weapons, as well as an "authentic" police uniform and a Ford Taurus that was painted in a fashion identical to a regular RCMP patrol car.

The 51-year-old denturist, whose business was in Halifax, began his killing spree in the small community of Portapique, about 40 kilometres west of Truro, late Saturday.

He managed to evade a police perimeter and continued killing people and burning homes in four other communities.

He was finally shot and killed by police at a gas pump in Enfield, N.S., his illegal guns nearby, about 12 hours after the first reports of his attacks at a home in Portapique.

Leather referred the issue of the exact type of guns that Wortman possessed to the acting director of an agency that is investigating the police shooting of the killer.

Contacted late Wednesday, Pat Curran, the acting director of the Serious Incident Response Team said he would look into providing the information about the types of guns Wortman had.

Andrew Somerset, the author of "Arms: the Culture and Credo of the Gun," said in an interview the news that Wortman was using firearms that he wasn't licensed to possess raises fresh issues.

"The big question now is how did he get that gun?" he wrote in an email.

Police will have to examine issues such as whether the gun was smuggled or purchased by a surrogate for Wortman, Somerset wrote in an email.

He noted there are already measures in place to discourage a black market in restricted weapons like handguns, which are supposed to be noted in a registry.

The array of gear and weaponry is emerging as one of the main elements of the RCMP probe three days after Wortman's death.

"Whether it's transportation, weapons, the uniforms, the vehicle itself, associates here and elsewhere, these are all the elements in the investigation currently being explored," Leather said.

He also said it's still unclear how many people died as a result of gunshots, as bodies were discovered in the burned homes and have required detailed autopsies to determine the exact cause of death.

It remains unclear whether Wortman was ever, in the past, granted a licence by the federal firearms licensing body operated by the RCMP.

Provincial court records confirm he was ordered to receive counselling for anger management after he pleaded guilty to an assault in the Halifax area on Oct. 29, 2001.

The victim, who asked not to have his name published, said he was 15 at the time and was waiting for a bus when Wortman came out of his denture clinic smelling of alcohol and told him to leave his property.

The man said he started walking to the next bus stop. "He grabbed me by the shirt and punched me in the back of the head," he said. "I was shocked." Police were called and they charged Wortman with assault after taking a statement from the victim in hospital.

Wortman was granted a conditional discharge, placed on probation nine months, ordered to undergo counselling, fined $50 and told to stay away from the victim. As well, he was prohibited from owning or possessing a weapon, ammunition or explosive substances. That prohibition expired after nine months under Section 110 of the Criminal Code.

Federal legislation passed last year expanded the scope of background checks on those who want to acquire a gun. Questions about an applicant's history now cover their entire lifetime, instead of just the five years immediately preceding the licence application.

It also forces gun retailers to keep records of firearms inventory and sales and requires the purchaser of a hunting rifle or shotgun to present a firearms licence, while the seller would have to ensure its validity.

— With files from Jim Bronskill in Ottawa and Michael MacDonald in Halifax.