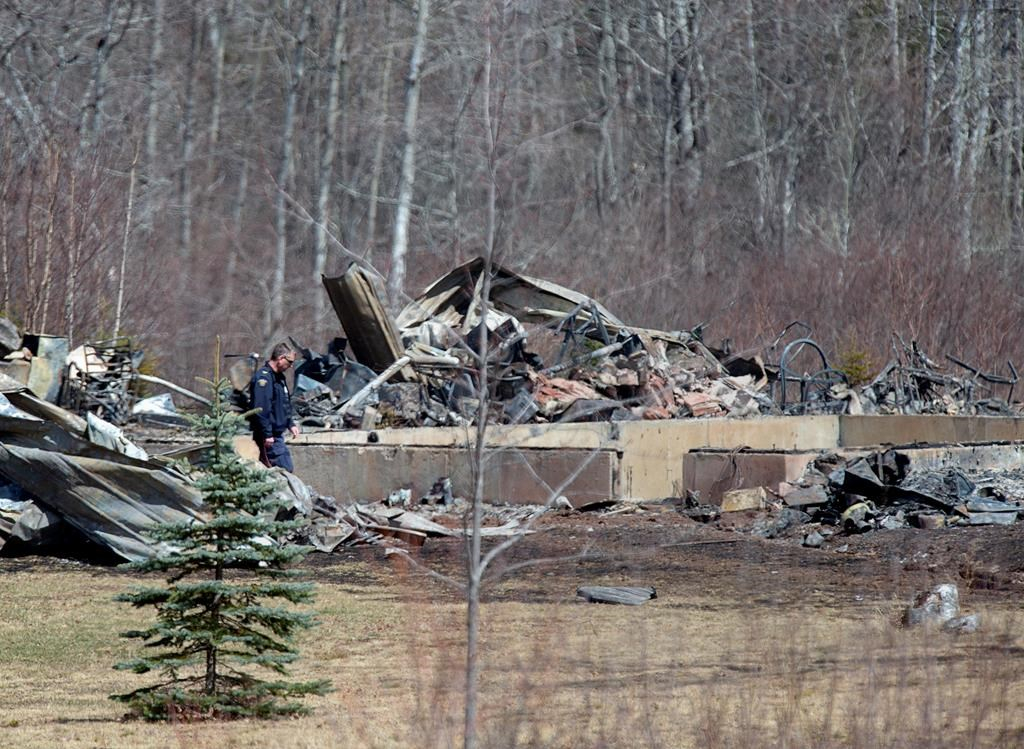 An RCMP investigator inspects a house destroyed by fire at the residence of Alanna Jenkins and Sean McLeod, both corrections officers, in Wentworth Centre, N.S. on Monday, April 20, 2020. File photo by The Canadian Press/Andrew Vaughan
Previous story
Next story

Under fire for how they alerted the public to a 12-hour massacre that took the lives of 22 people, the Nova Scotia RCMP defended their actions Wednesday, saying their use of Twitter was effective.

Since the horrific string of killings started Saturday night and stretched into Sunday morning, questions have been raised as to why the province did not use an emergency alert system to transmit warnings to Nova Scotians' cellphones and television screens.

RCMP Chief Supt. Chris Leather said Twitter messages from the RCMP started Saturday at 10:26 p.m., when the Mounties warned of a firearms complaint in Portapique, a tiny village about a 130-kilometre drive north of Halifax.

Leather read from a statement Wednesday making it clear he was aware the RCMP's communication with the public was under scrutiny.

"From that initial call, our response was dynamic and fluid, with members using their training to assess what was going on while encountering the unimaginable," he said.

"Critical incident command staff were processing fast-changing information related to what was unfolding in front of them."

The senior Mountie said officers on the scene at Portapique Beach Road quickly learned there had been a number of fatal shootings amongst a clutch of seasonal and permanent homes, some of which were on fire.

However, police weren't aware the shooter had left the area until 8:02 a.m. on Sunday.

"Until the following day, we had some idea where the suspect was located, some theories — but we had no idea," he said.

The first RCMP tweet about an active shooter on the loose was sent at 8:02 a.m.

As well, Leather confirmed it was between 7 a.m. and 8 a.m. that police learned from a witness that the suspect was dressed as an RCMP officer and driving a vehicle that looked exactly like a police cruiser.

That disturbing information, including a photo of the car, wasn't relayed on Twitter until 10:21 a.m.

"Twitter allowed our information to be shared, followed and broadcast by local, provincial and national news outlets," Leather said.

He said the provincial Emergency Management Office (EMO) contacted the RCMP at 10:15 a.m. to ask about sending an emergency message, but the alert was never sent out.

The Mounties were still crafting a message when the suspect was killed almost two hours later at a gas station in Enfield, N.S., about 90 kilometres south of Portapique — and within the Halifax region.

When asked about the lag in getting out such an urgent message, Leather indicated there were delays within the chain of command.

"You can appreciate that a series of phone calls had to be made to find the officer in charge that evening and to speak to the serious incident commander to have the conversation about the issuing of a message," he said.

"A lot of the delay was based on communications between the EMO and the various officers — and then a discussion about how the message would be constructed and what it would say."

That morning, the U.S. Consulate in Halifax emailed alerts to its citizens warning of the danger, saying it based its alert on the RCMP's tweets.

Marcia R. Seitz-Ehler, a spokeswoman for the U.S. Consulate, said the consulate's email advised people to avoid the Portapique area and to remain inside with their doors locked.

"It is our protocol — when emergencies occur — to alert U.S. citizens in the area to the situation," she said. She did not immediately respond to an inquiry about what time the U.S. alert was sent.

When Premier Stephen McNeil was asked Wednesday why the province didn't issue an alert based on the tweets, he said emergency officials couldn't act until the RCMP had prepared an approved message.

"That's the protocol in place when it comes to the EMO," the premier told a news conference.

"The lead agency is the one that has to put the message together. We would not go from what's happening on Twitter.... No message was received, even though EMO had reached out a number of times throughout the morning to the RCMP."

Residents of some of the five communities where the killer struck have said they would have changed their behaviour had an alert been sent.

David Matthews was walking with his wife in Wentworth on Sunday morning when they heard a "pop," which they said sounded like it could be a gunshot, or perhaps just a car backfiring.

Shortly after the Matthews returned home, their phone started ringing with warnings from friends that there was an active shooter on the loose in the neighbourhood. They later learned that a fellow walker was gunned down that morning on a road nearby.

"In my mind, there should have been some provincial alert ... (that) you've got to be careful, because there's an active shooter in the area," Matthews told The Canadian Press.

On Tuesday, police confirmed the rampage claimed 22 victims, including neighbours of the shooter, a family of three, a teacher, two nurses, two correctional officers and an RCMP officer.

Leather said investigators confirmed the 51-year-old shooter, Gabriel Wortman, was killed by police before noon on Sunday and had acted alone. He said investigators are still trying to determine whether anyone assisted the gunman leading up to the incident.

That assistance could have included the acquisition of the vehicle, complete with emergency lights and RCMP decals, and an authentic police uniform.

Police have said the mock cruiser and uniform helped the shooter escape detection as he travelled though the communities of Wentworth, Debert, Shubenacadie and Enfield.

The gunman shot people he knew, killed others at random and had planned the massacre, police said.

There are 16 crime scenes spread over the northern half of Nova Scotia. A total of five structures were set on fire, though the exact sequence of events remains unclear.

Meanwhile, the Canadian military has been called in to help the RCMP.

The military issued a statement saying it has provided personnel, modular tents, lights, tables, chairs and generators to a number of locations in the province.

— with files from Michael Tutton in Halifax