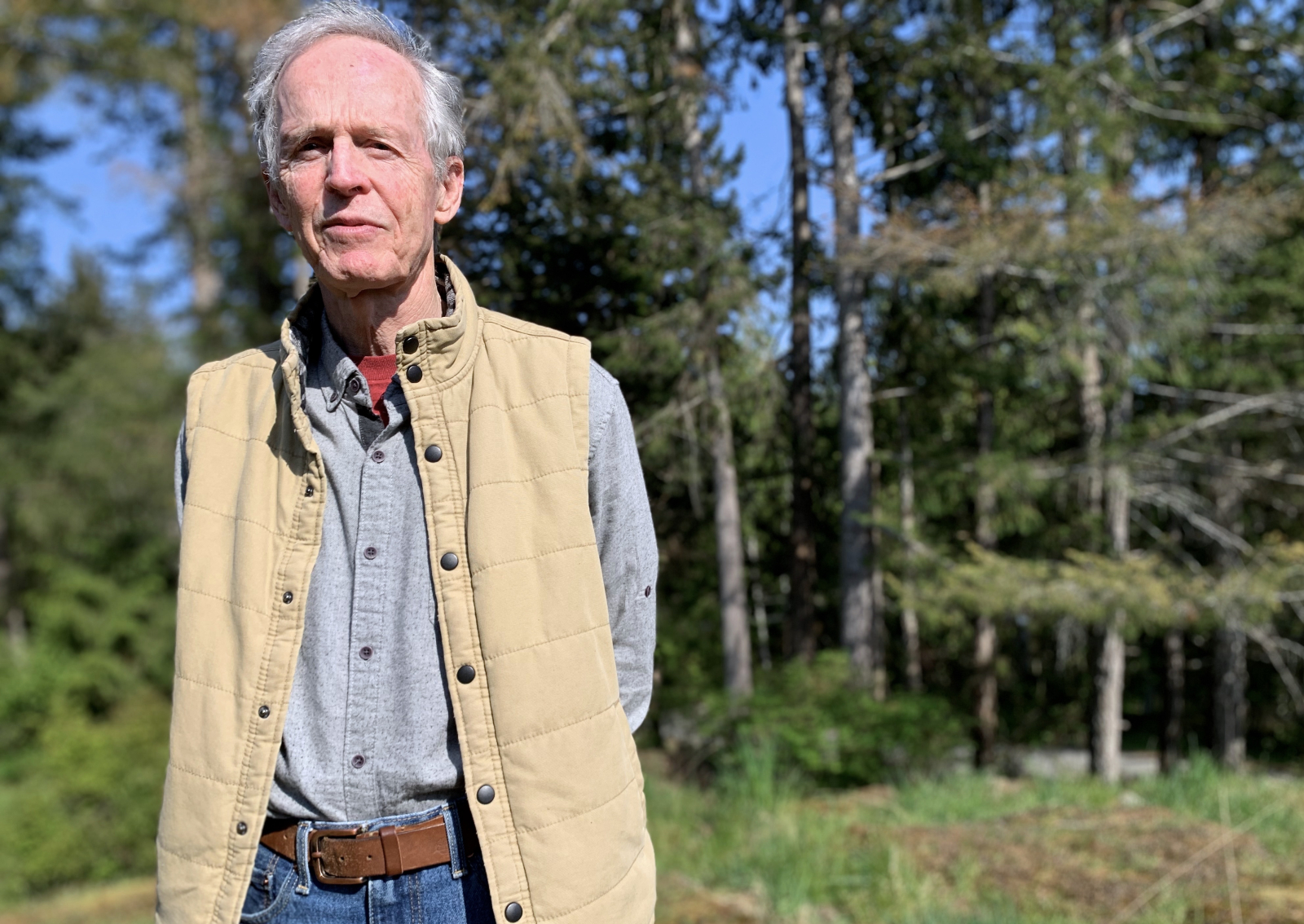 Jim Ludgate, 77, says he is not extremely worried about his own health during the COVID-19 pandemic, but he does follow prevention measures. Photo: Rochelle Baker
Previous story
Next story

Seniors are the most likely age group to be extremely worried about their health and social isolation during COVID-19 pandemic, according to a new Statistics Canada survey

But the older residents on Quadra and Cortes, rural islands located off B.C.’s west coast may be bucking that trend.

A total of 200,000 people took part in the federal agency’s first voluntary online questionnaire about how COVID-19 is affecting their lives.

The goal of the crowdsourcing project is to generate timely, relevant information about the pandemic policy-makers can use in decision making, Statistics Canada stated Thursday.

However, regardless of age, at least 80 per cent of participants in all age groups reported being very or extremely anxious about overloading the health system. Additionally, the vast majority of participants reported they were worried about vulnerable people's health.

More specifically, 60 per cent of seniors participating in the survey reported they are very or extremely concerned about their own health.

“I’m careful but not concerned,” Ludgate said, adding he’s generally healthy and has no significant underlying conditions that put him at greater risk to COVID-19.

Ludgate says he makes sure to eat well and exercise. He and his wife avoid leaving their house to limit their exposure to the virus.

“I go out once a month for a seniors shop in Campbell River, and once a week for perishables on the island,” he said.“And that involves wearing a mask, washing my hands and that sort of thing.”

"I have the impression that people just don’t want to make a fuss. Maybe it also has something to do with the resilience of people on the island,” Cortes Island senior Carina Verhoeve, on her peers state of mind around COVID-19"

He notes there is access to medical help or services on the island if he needs it. But, he is philosophical about the risks of the virus.

“My faith is another aspect of it. I’m trusting in God’s provision for me, whether it comes for me or not,” Ludgate said.

“Although, God’s provision isn’t always what I would choose for myself.”

Seniors like Ludgate make up a significant portion of the population living on Quadra and neighbouring Cortes Island. And many other residents on the isles are on the cusp of joining their ranks, according to census data.

The median age on Quadra Island is close to 57 years old, significantly higher than B.C.’s median age of 43. Additionally, close to 29 per cent of the population is aged 65 and over, compared with the provincial rate of 18 per cent and 17 per cent nationally.

On Cortes, the statistics are similar with the median age being nearly 54 years old and 28 per cent of the population falling the into seniors category.

Carina Verhoeve, co-ordinator of the Seniors Helping Seniors (SHS) group on Cortes Island, says her feeling is also that older residents in the community are being careful but aren’t overly apprehensive.

“The seniors I’ve been in touch with are being very cautious, but I have the impression that people just don’t want to make a fuss,” the 67-year-old said. “Maybe it also has something to do with the resilience of people on the island.”

As for seniors that might be more vulnerable or isolated, the support systems are still at play during the crisis, she said

“I have my antenna out …and we deal with them now, as we did before (the pandemic),” Verhoeve said.

And some seniors on the island, even prior to the pandemic, like the solitude of rural living, she observed.

Karen Kobayashi, sociology professor and researcher with the Institute on Aging and Lifelong Health at the University of Victoria, concurred that seniors living in rural areas might weather the health crisis more easily, particularly around COVID-19’s self-isolation measures.

“I think it’s very true. It’s been shown in research that people who choose to live in areas with fewer resources demonstrate a kind of resilience that people in urban areas don’t have,” Kobayashi said. “They are just a more hardy persona or character.”

Also, those who choose to live in rural areas often state they prefer nature to people, and so wouldn’t be as negatively impacted by COVID-19’s self-isolation measures, she observed.

“There’s a different cultural context, people who have lived in rural areas are more likely to have lived that way for many years.

However, Kobayashi noted it’s no surprise that older adults, on an overall basis, are likely to feel very anxious about coronavirus impacting their health, given they are most at risk.

In fact, the number of seniors feeling that way is likely to be higher than six out of 10, as suggested by the Statistics Canada survey, Kobayashi said. The crowdsourcing survey was voluntary and facilitated over the Internet, email and social media, she added.

“This is a select sample of older adults who have access to Internet resources,” she said.

Vulnerable older adults who are Indigenous, immigrants, refugees or living in highly remote areas are less likely to have access to the Internet and are likely underrepresented, she added.

“People who live in very precarious circumstances… they are the voices that would have greater concerns, because they don’t have the same access to health care services,” Kobayashi said.

“People have been relatively calm, we haven’t had anxious phone calls or a push for services,” the 72-year-old said.

Most seniors involved with Quadra Circle take measures to protect themselves from the virus, but don’t seem overly worried unless they have another health condition, she said.

Quadra Circle has set up online Zoom meetings and phone trees to give people the opportunity to socialize after group activities were cancelled, but there haven’t been many takers, said McDowell.

“I don’t know if that’s due to our rural environment. But, I think people have yards and gardens and ways of getting outside and amusing themselves,” she said. “Certainly they are missing the social activities… but doing that online might be too big a leap for them technology wise.”

“Generally, I am social. I do miss being more socially involved, but I don’t worry about it,” he said. “This thing will end.”

In addition to the points in

In addition to the points in the above article, people in smaller communities tend to look out more for "their seniors" than in larger ones.
Especially if/when those seniors have lived there for some time.