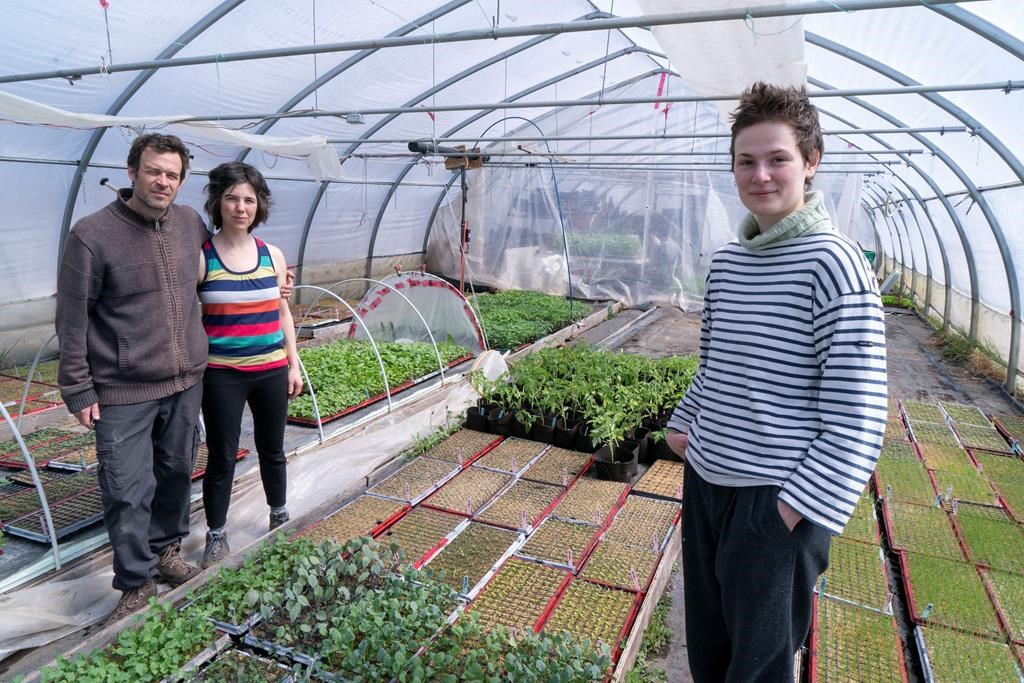 Melina Plante has found that, on her five-hectare fruit and vegetable farm south of Montreal by the U.S. border, one experienced Guatemalan farmhand can produce more than two Quebecers.

She and her husband, Francois D’Aoust, have hired the same four Guatemalan seasonal workers year after year. They typically clock up to 70 hours per week on the farm in Havelock, Que., and though the pay is relatively low, the workers value it.

But this year, Plante said, the farmhands are stuck in Guatemala due to travel restrictions their country has imposed to limit the spread of COVID-19.

They are among the roughly 5,000 seasonal and temporary workers that Quebec's farmers' union estimates will be missing on the province's farms this year because of the pandemic, leaving Plante, D'Aoust and scores of other farmers with a tough choice: They can either reduce this year's food production or take a chance on inexperienced but eager Quebecers thrown out of work by the pandemic.

In response to the foreign labour shortage, the provincial government on April 17 announced a $45-million program to pay an extra $100 a week above regular wages as an incentive to work on a farm. About 2,800 Quebecers have so far responded to Premier Francois Legault's call.

But it is still unclear if there are enough unemployed Quebecers able and willing to do the work — and whether those who do will stick around if the economy picks up and their old jobs return.

Plante said bluntly that in the past, Quebecers have proven unreliable farmhands.

"That's been our experience — and why we turned to foreign labour .... We estimate that one Guatemalan worker can be replaced by 2.5 Quebecers," she said by phone from her farm.

The provincial program pays minimum wage, plus the $100 per week top-up and requires that applicants be available to work at least 25 hours per week. But Marcel Groleau, president of Union des producteurs agricoles, which represents about 42,000 Quebec farmers, says those kind of schedules simply won't cut it.

"It will take farms — at a minimum — 40 hours per week, per employee, to replace the foreign labour," he said in a recent interview.

Quebecers answer call to work on farms, but are they up to the task?

The Canadian border remains open to seasonal farm workers, he explained, but many of them are having difficulty obtaining travel permits in their home countries.

"The pandemic made us realize how much we rely on foreign labour — but it's been hard to attract local labour in the fields for many years now," Groleau said.

Florence Lachapelle is hoping she'll qualify for the extra $100 per week.

She had already agreed to work on Plante's farm to help replace the Guatemalan farmhands before the province created the recruiting program. The 19-year-old visual arts student from Montreal met Plante and D'Aoust through family.

Lachapelle said she got involved in environmental activism at her junior college but since the pandemic doesn't know what to do with her energy.

"I think the key to fighting climate change is through agricultural self-sufficiency and knowing how to work the earth in a respectful way," she said in a recent interview. "I really want to learn how it works."

COVID-19 has highlighted the problems associated with industry concentration, particularly within the food-processing sector, Groleau said.

"There are fewer and fewer (processing plants), and the ones that are left are bigger and bigger," he said. "When there is an issue at one of them, there are serious impacts for the rest of the supply chain."

For example, the closure of a single meat packing plant in Alberta last week forced Canada to curtail beef exports to meet domestic demand. The Cargill-operated factory in Alberta has seen an outbreak linked to at least 484 cases of COVID-19s, including one death.

"We are not, at this point, anticipating shortages of beef," Prime Minister Justin Trudeau said earlier in the week, "but prices might go up.''

Aside from higher prices, Plante said she and other farmers in her network expect food shortages this fall. She and her husband have already estimated they will have to cut production this year by about a third.

Pascal Theriault, a lecturer at McGill University's farm management and technology program and vice-president of Quebec's order of agronomists, said he hopes this crisis forces Canadians to rethink their relationship with food.

"We worked on producing food at the lowest possible cost and that's all that counted," he said in a recent interview. But over the years, international supply chains controlled by a handful of big players have contributed to Canadians' alienation from the food they eat.

"I think the crisis will build awareness to eat more locally," he said. "It's not that we weren't doing it before, but now we are really paying attention to it."

Canadians spend about 10 per cent of their budgets on food — one of the lowest proportions in the world, Theriault said. So there is room to pay a little more for local products — but not that much more, he said.

Lachapelle started her new job Thursday. She'll live in a trailer on Plante's farm and keep mostly to herself for two weeks to ensure she is not carrying the virus. Then when she starts what she expects will be gruelling work in the fields, she will respect physical distancing guidelines.

"I am very hard-working," she said. "I'm 19, and I think I am ready, physically and mentally. I know it's going to be a challenge. But I think it'll be will super fun!"

This report by The Canadian Press was first published April 26, 2020.

It will not "be fun". It is backbreaking work and represents a type of labour that has almost disappeared among the Canadian working class. This is probably true of most "developed" countries and though I have no knowledge of what happens in the EU, I would guess that they too are relying on "guest workers" from Mediterranean and Sub Saharan Africa (if they can overcome the immigration hurdles and the dangers of the "migraton") as well as people fleeing from the Middle East, and Eastern Europe.

Let's face it - the "Developed" world's citizens are no longer willing to perform "stoop" labour for wages inadequate to live on.

I find it ironic, that Quebec is willing to pay Quebecers who are less than half as productive as the migrant workers, the same minimal wage with a $100 premium available.

Once the migratory workers are again available, it appears that the normal minimal wage should be increased by about 150% in recogniton of their greater productivity!