Call for military to assist Fort McMurray due to flooding 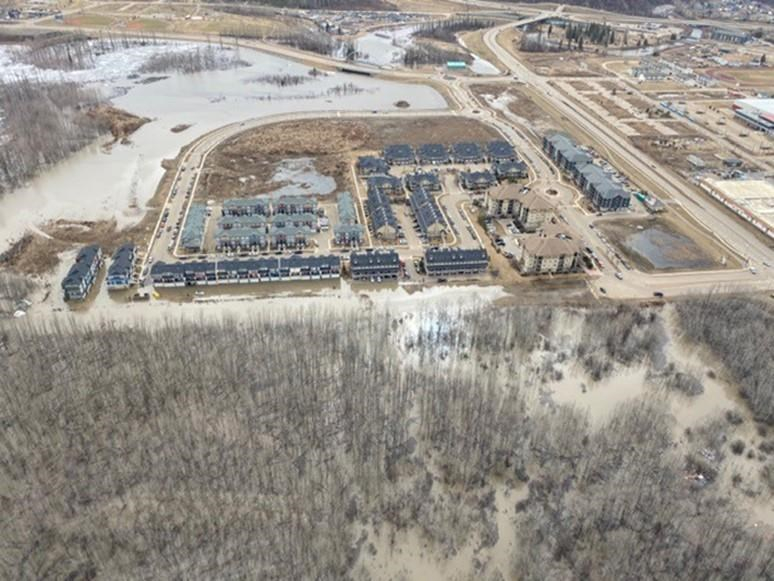 Flooding is seen in the Longboat Landing area of Fort McMurray, Alta. on Sunday, April 26, 2020 in this handout photo. Handout photo by The Regional Municipality of Wood Buffalo
Previous story

Provincial and federal governments say they are ready to help with flooding in northern Alberta as the number of evacuations in Fort McMurray continued to increase Monday.

"We have requested assistance from the federal government as we face this new crisis," Don Scott, mayor of the Regional Municipality of Wood Buffalo, said in a social media post.

It came as spring ice breakup on the Athabasca and Clearwater rivers led to flooding and the complete closure of the city's downtown core.

Deputy Prime Minister Chrystia Freeland said the federal government was aware of the situation and was looking for ways to help.

"The fact that flooding season and, in due course, forest fire season is coinciding with coronavirus in Canada is posing some special challenges," she said in Ottawa. "We have been gearing up for those from the outset and this is an issue we are looking at urgently today."

The municipality on the weekend declared a second state of local emergency on top of one declared last month because of the COVID-19 pandemic.

Premier Jason Kenney said in a tweet Monday that he and Environment Minister Jason Nixon were on their way to Fort McMurray to "get eyes on the flood situation and to ensure all necessary support is being provided in response to the local emergency."

Kenney said he would meet with Scott, local members of the legislature and emergency management officials.

No one from the municipality was available Monday for an interview, but Scott said Sunday that something always occurs when the ice breaks each spring and this happens to be a one-in-20-year event.

Officials had been monitoring an ice jam about 10 kilometres upstream for several days and it let loose early Sunday.

The municipality started issuing evacuation orders in some areas Sunday and those continued throughout the day Monday for the Lower Townsite area in Fort McMurray's downtown.

Officials said in an emailed statement late Monday that more than 5,000 people had already registered at its evacuation centres and noted that number was expected to grow.

They asked people to pay attention to the mandatory orders.

"Our emergency response crews have been working night and day to help ... our residents get to those safe places," Regional Fire Chief Jody Butz said in an audio message to residents. "We've rescued over 200 residents."

Highway 63, the main route into and out of the city, remained open and the evacuation orders did not include the hospital.

"Significant resources are dedicated to berming and sandbagging the area surrounding the hospital to mitigate flood risk," Scott Davis, the municipality's director of emergency management, said in a statement. "There is no threat to the hospital at this time."

Alberta's chief medical officer of health, Dr. Deena Hinshaw, said during her daily briefing that provincial officials were prepared for potential evacuations due to floods or fires.

"Our teams at health have been working with the provincial operations centre to make sure there are considerations, for example, in evacuation centres," she said.

Hinshaw said that includes physical distancing and sanitation measures to reduce the spread of COVID-19.

Officials with Alberta Health Services have issued a boil water advisory due to reports of discolouration in tap water in some Fort McMurray neighbourhoods. It was later expanded to the entire city, as well as to Anzac, Draper, Fort McMurray First Nation, Gregoire Lake Estates and Saprae Creek Estates.

Scott told residents in a social media post Monday afternoon that he had been receiving requests to provide a video or an update on the flooding.

"Please know that right now the primary focus of our entire administrative team and council is the safety of residents," said Scott.

The mayor said municipal staff were working with volunteers, RCMP and other partners to ensure that safety.

"I know you might feel anxious, afraid, or frustrated," he wrote. "This is a hard time in our community, and it’s certainly not our first hard time."

Scott said residents are displaying the same strength and courage as they have in the past.

Fort McMurray has dealt with its share of disasters, including a raging wildfire in May 2016 that forced an evacuation of the entire city and destroyed 2,400 homes and buildings.

This report by The Canadian Press was first published April 27, 2020

Gosh, whatever one might think about oil sands development, you have to feel for the people of this community. One major crisis after another. Hope the military can help with this one.

Yes...call the Military to stop the glaciers from melting