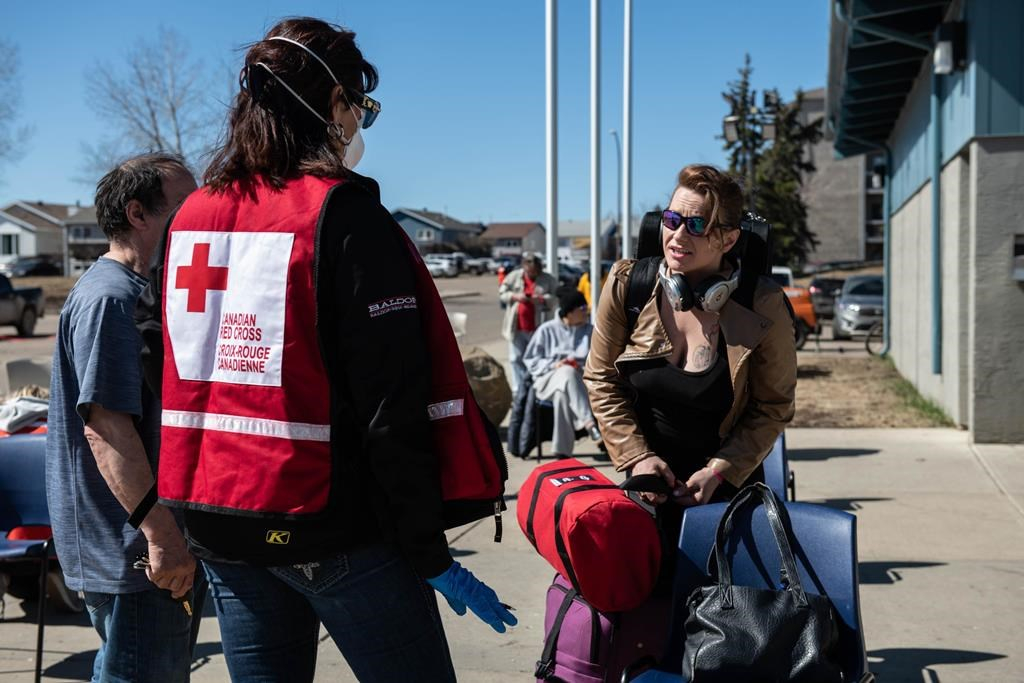 Joseph Enverga kept hoping the flooding would slow down or even stop as his apartment lights flickered on and off.

The 35-year old was prepared for an evacuation of downtown Fort McMurray, Alta., on Sunday afternoon. By dawn on Monday, he looked out his window and saw the reflection of his building in the parking lot that was covered in water.

He decided it was time to go.

"I was telling myself: this is going to be the best evacuation ever."

Like many Fort McMurray residents, Enverga is no stranger to evacuation orders. He was forced out of his home during a raging wildfire in May 2016 that led to the evacuation of the entire city and destroyed 2,400 homes and buildings.

On Tuesday, municipal and provincial officials were keeping a close eye on river levels after a 25-kilometre ice jam caused major flooding and forced nearly 13,000 people from their homes in the downtown.

Colleen Walford, a river forecaster with Alberta Environment, said a monitoring flight just before noon Tuesday determined that the ice jam had shortened by about one kilometre and was melting.

"We have nice sunny conditions up in Fort McMurray today. We hope that continues tomorrow and it will continue to deteriorate the ice jam."

But officials with the Regional Municipality of Wood Buffalo said it remains a critical situation.

'How much can a person take?' Flooding forces 13,000 from downtown Fort McMurray

"We are not in the home stretch yet," Scott Davis, director of emergency management, told reporters.

Data shows the Clearwater River was still rising and the Athabasca River had only dropped by about four centimetres.

Mayor Don Scott said it has caused the worst flooding in the region in recent memory.

"This is a one-in-100-year flood," he said. "This is something that we haven't seen in this generation.

"And it's actually happening during the COVID-19 pandemic, which is a dual combination of issues."

A second state of local emergency is in effect on top of one declared last month because of the pandemic.

Officials said evacuees are being put up in hotels and work camps where they can have their own space.

More than 6,000 people have registered at two evacuation centres and the municipality said that number is expected to grow.

Officials also said crews had to rescue more than 220 residents.

Enverga, who didn't get an evacuation order, said he ended up getting a ride with a rescue boat after he realized his van wasn't going to make it through the water.

Enverga said he was taken to an evacuation centre then went to stay with friends in another Fort McMurray neighbourhood.

Others, including Coun. Jeff Peddle and former provincial politician Brian Jean, said they had to leave their flooded homes. Jean, who lost a home in the 2016 wildfire, said his almost-finished new house was under three metres of water.

"I'm very sad. I'm sad for the people. It started with the wildfires then it went to the economy ... then it went to COVID-19, which was an even bigger economy hit, and now the flood," he said.

"How much can a person take?"

"It really is ... devastating to see much of central Fort McMurray flooded just four years after the terrible fires of 2016," Kenney said during a media briefing Tuesday.

"To imagine people who have just rebuilt their homes now struggling with those homes being flooded and the adversity of that community after four years of economic trials is just heartbreaking."

Kenney said another 450 people have been affected by ice jams in the Fort Vermilion area.

"We will be ensuring provincial financial support," he added.

Earlier in the day, Nixon said the government will work with Wood Buffalo to request Ottawa's support if it's needed.

"At this point, we are satisfied that both the province and the municipality have the situation under control," he said.

The federal government said earlier Tuesday that it is monitoring the situation in Fort McMurray.

"While no formal requests have been made, our government is ready to help when called upon," said an emailed statement from federal Emergency Preparedness Minister Bill Blair.

— By Colette Derworiz in Edmonton.

Call for military to assist Fort McMurray due to flooding