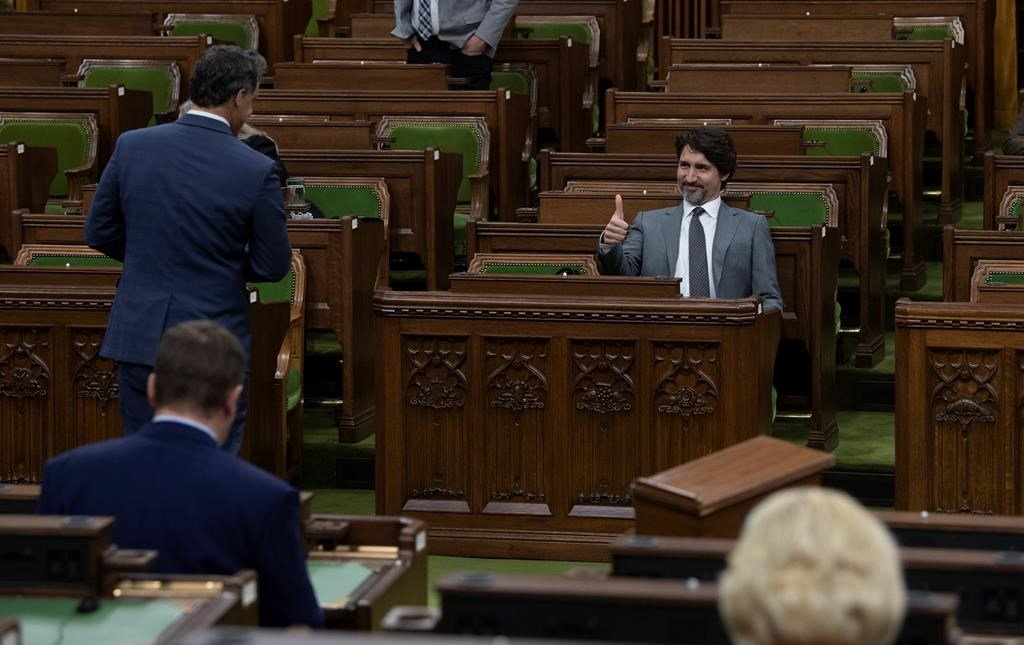 Prime Minister Justin Trudeau gives the thumbs up as he speaks with a Member of Parliament as they wait for the COVID-19 committee in the House of Commons Chamber on Wednesday, April 29, 2020 in Ottawa. Photo by The Canadian Press/Adrian Wyld
Previous story
Next story

Prime Minister Justin Trudeau is leaving the door open to using digital technology to try to limit the spread of the novel coronavirus through tracking down contacts of people who have it, but says it needs to be done in a way that protects the privacy of Canadians.

"Getting that balance right will be extremely important," Trudeau said Wednesday in Ottawa.

Countries such as South Korea and Singapore have used cellphones and other digital technology to track people's movements and warn about potential contacts with individuals who have COVID-19 to slow the spread of the virus.

A number of provinces have since suggested they are looking at voluntary programs to conduct contact tracing, which is usually performed by public health officials who carefully question patients about where they have been and with whom they've interacted.

"We have a number of proposals and companies working on different models that might be applicable to Canada but as we move forward on taking decisions, we're going to keep in mind that Canadians put a very high value on their privacy, on their data security," Trudeau said.

"We need to make sure we respect that, even in a time of emergency measures and significant difficulty and crisis," adding that voluntary measures could be one way to resolve that issue.

One possibility is a system that would send alerts to smartphones that have recently been close to devices carried by people who test positive for the novel coronavirus.

Canada's chief public health officer Dr. Theresa Tam says that in addition to privacy concerns, the technology itself remains unproven and will need to be refined to ensure false positives and other issues do not emerge.

"Those kinds of characteristics are not what you want to have, because that would alarm a whole bunch of people. They may then show up to be tested when in fact they were not at risk," Tam said Wednesday during a media briefing in Ottawa.

Tam says such technology could make it easier to manage the spread of COVID-19, but it should be guided by public health officials who are on the front lines of contact tracing.

"Whatever we have has to complement the work. It can't sort of replace the work," she said.