New streaming picks offer goofy fun, zombies at the rez and the return of a gem 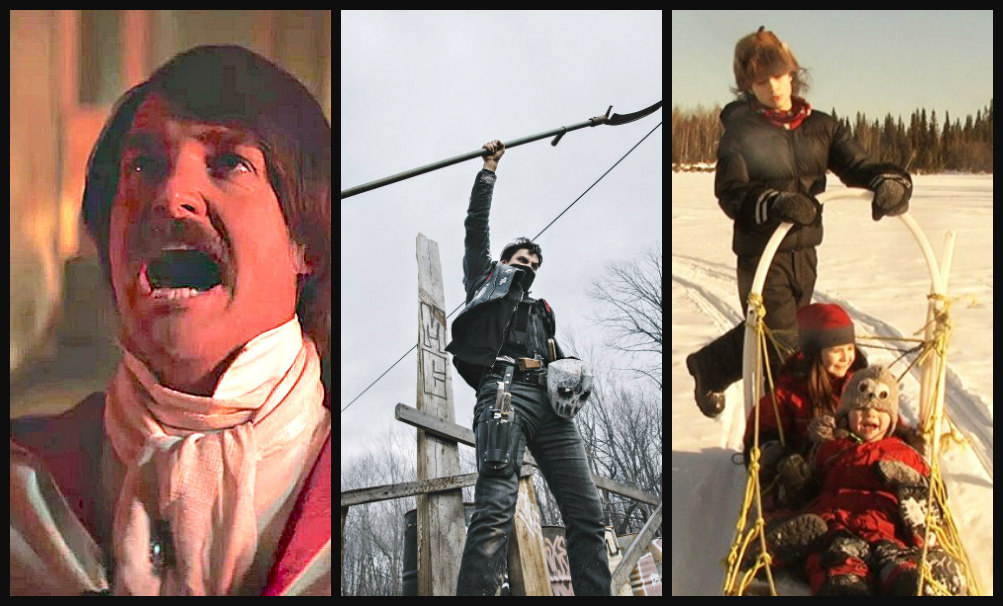 Shown here: Extra Ordinary, Blood Quantum and All the Time in the World
Previous story
Next story

A new normal isn’t anywhere in sight for the movies. Universal, which took in US$100 million by streaming rather than postponing Trolls World Tour, has infuriated one of the biggest theatre owners. AMC in the U.S. (Odeon in the U.K.) won’t play any of their movies ever again. So, as they say ... Stay tuned.

As that goes on, your choices for streaming movies absolutely explode this month. Downton Abbey, Joker, Rocketman, The Fantastic Mr. Fox are just a few coming available. Over at Disney+, Star Wars: The Rise of Skywalker starts Monday, which Disney has grandly named Star Wars Day. For the first time, all nine movies will be available in one place. Plus, all those spinoffs, of course, and starting today, two oldies: George of the Jungle with Brendan Fraser and Homeward Bound with Michael J. Fox.

Speaking of Canadian actors, Amazon Prime today starts running the first season of Bonanza, the old TV western with Lorne Greene in charge of the ranch and his clan.

Crave, meanwhile, has the season finale of Westworld starting Sunday and later this month, Amazon starts another season of Keeping Up With The Kardashians. It’s the 18th, if you can believe it, and Kanye West will finally appear regularly showing life with his wife Kim.

Further down I’ll plug new offerings from the National Film Board and The Cinematheque, but here are some reviews of the mid-level films now streaming.

All the Time in the World: 4

EXTRA ORDINARY: Who couldn’t use some silly, goofy fun right now? This comedy from Ireland does the job nicely. The humour is quirky, contemporary, based in popular culture and plentiful. It’s been streaming at https://viff.org and starting Tuesday, is also available by video on demand.

Maeve Higgins is Rose, a driving instructor with an added talent that she doesn’t want to use. She can detect ghosts and gets asked to perform exorcisms at haunted recycling bins and such. Will Forte signs up for driving lessons, but really to foil her supernatural talents.

He plays an American rock star (his one hit is known to all). With his snarky girlfriend, he has moved in nearby for tax purposes and to revive his career. He wants to record a comeback album and has made a pact with the devil to help him. But he needs a virgin for a satanic rite; and fast. He’s chosen a teen girl; her father turns to Rose to stop him and droll comedy fires up. Mike Ahern and Enda Loughman write and direct in a speedy style they’ve honed in shorts, TV ads and music videos to deliver the fun. The title misspelling is deliberate, a final joke. 3½ out of 5

BLOOD QUANTUM: Jeff Barnaby sees socially conscious concerns about Indigenous people in Canada in this his second movie. It’s hard to see them though behind all the blood spattering around in what is more obviously a zombie movie. It happens to be set on a Mi’gmaq reserve in Quebec (where he is from) and does invoke bad memories and lingering resentments, but they resonate more with him than most viewers. They feel almost secondary to the main action, a zombie outbreak among the “settlers” off the reserve. It’s threatening to spread inside, like, as one character puts it, an epidemic.

People on the reserve are immune; outsiders want to come in to be safe. The community has to respond. Do they help or just defend themselves to survive? There’s debate with rhetoric like, “The Earth is an animal. It has turned white men into fertilizer.” The sheriff (Michael Greyeyes) wants to be kind; his son (Kiowa Gordon) just wants to kill zombies, while the mother (Elle-Maija Tailfeathers) is between. Probably a pretty good representation of how opinion would split. Don’t dwell on it, though. We’ve got action to watch. Cue the guns, the rifle butt, the chainsaw in vibrant scenes that Barnaby has staged. The title, by the way, refers to an old American measure of aboriginal ancestry. (Available Tuesday on all digital and on-demand platforms) 3 out of 5

ALL THE TIME IN THE WORLD: The group Reel Causes seems to have been inspired by the lockdown most of us are in these days to bring back this wonderful film from a few years ago. It was the most popular Canadian documentary at VIFF in 2015 and shows a prime example of isolation. A family from Dawson City in the Yukon spent nine months in the bush living in a small cabin with no electricity, computers, phones or, most pointedly, no watches or clocks. The cabin was only accessible by boat, or in the winter by snowmobile. They followed only the rhythms of nature and each other's company. They returned to a simpler life powered by imagination, creativity, hard work and what one of the children called “freedom.”

Suzanne Crocker, the mother in the family, served as director, producer, camera operator and sometimes editor for this colourful, sharp-focus film. She, her husband and three children, ages 10, 8 and 4, give their thoughts in voiceover while we watch them bake bread, chop down trees, dig a snowcave, read to each other and generally get close as a family. A pesky bear provides some late tension in what is generally a calm, idyllic and heartening experience. As another of the children says: “You feel connected to everything around you.” I was surprised at how easily the kids took to the simple life and never quarrelled. Streaming starts Saturday, and ends May 9 with a live Q&A with the family. Tickets by donation; $5 is suggested. (https://www.reelcauses.org/all-the-time-in-the-world/) 4 out of 5.

THE SONG AND THE SORROW: The National Film Board is adding five new documentaries to the many it is streaming for us, most of them free.

Up first is this short film about Catherine MacLellan and her attempts to understand why her father committed suicide. He was Gene MacLellan, the P.E.I. composer and singer of such classic Canadian songs as Snowbird and Put Your Hand in the Hand. She was the one who found his body, I heard in a trailer for the film. Musicians and singer Anne Murray talk about him in what looks like an emotional film. Find it at https://www.nfb.ca

MEAT THE FUTURE: If COVID-19 in meatpacking plants has you concerned, you’ll be especially interested in this documentary. Even if you’re just feeling doubts about what you eat because here’s a developing alternative. Meat grown in a lab. Not in a factory farm. Not from animals slaughtered in a plant. Scientists are able to take a few cells from an animal, grow them in vats and produce meat that looks and cooks like the product you buy at the store. A couple of serving sessions in Liz Marshall’s documentary suggest it tastes good, too.

Her film focuses on a San Francisco company, Memphis Meats, and its founder, Dr. Uma Valeti, a trained cardiologist. We see their research, their lobbying for acceptance (and regulations) in Washington and their answers to the skeptics, like the Cattlemen’s Association. And mostly we’re told the facts. Meat eating will double in 30 years. The industry can’t meet that demand. Ranching uses too much land and water and spews out greenhouse gases. Killing animals for food is inhumane. Interestingly, Marshall, who in an earlier film showed horrible conditions in factory farms, doesn’t dwell on that here. She just mentions them and concentrates on the potential of this new way. “One of the biggest ideas in the history of the world,” somebody calls it. There’s no word though on how close it is to reaching the supermarkets. (Part of Hot Docs at Home on CBC and GEM, Thurs May 7) 3½ out of 5

TAMMY’S ALWAYS DYING: Women who had a difficult relationship with their mother will totally get this one. In this film, mom is needy, narcissistic, alcoholic and overbearing. It’s a gloriously over-the-top performance by Felicity Huffman. (Yes, the actor who spent 11 days in jail in that college admissions scandal.) Her work is strong as a happy drunk with a vicious, complaining side when she’s not intoxicated. “We’re all trash,” she says.

Anastasia Phillips plays her dutiful daughter, who’s been helping whenever she’s called. Which is often. She’s pulled back and has to move in when mom is diagnosed with cancer, and the grating connections between the two worsen. Mom recalls she was a fat child and an awful flute player. That will resonate, but a sub-plot doesn’t. The daughter gets herself on to a TV show where she’s interviewed about her life, and pushed to fit the host’s ideas not her own. It does settle down with a poignant turn later, but generally it’s a drama with a low-rent look and feel, set appropriately enough in steel town Hamilton, Ont. It’s a second film by actor-turned director Amy Jo Johnson. (On several platforms including Rogers, Bell, Telus, Shaw, iTunes, Microsoft Video and Google Play) 2½ out of 5

ROBERT THE BRUCE: Read the history and you'll see there's much more to this story than we get in this film. Robert was the first king of Scotland. He fought with William Wallace (we saw him in Braveheart) and got the throne by winning a competition for it with a simple manoeuvre, killing a rival. He then fought the British and won in a key battle. He's been an inspiration ever since then for Scots wanting independence.

The history is arguable, but inspiring. The film doesn't go there though. It focuses entirely on a few months when he disappeared from public view, was taken in by a farm family and mulled over his future. He was insecure, unsure if he could be a good ruler. And while that could have made a compelling drama, too, doesn't play much of a role in this film, either. We get lots of fervent talk about freedom, much of it mannered and content with only a surface treatment. It makes for a dull film. Angus Macfadyen, who played him in Braveheart and also here, wrote the script as a call to Scottish nationalists. It's got the words, but not the spirit. It was directed by an Australian Richard Gray and filmed in Montana. (VOD starting Tuesday) 2 out of 5