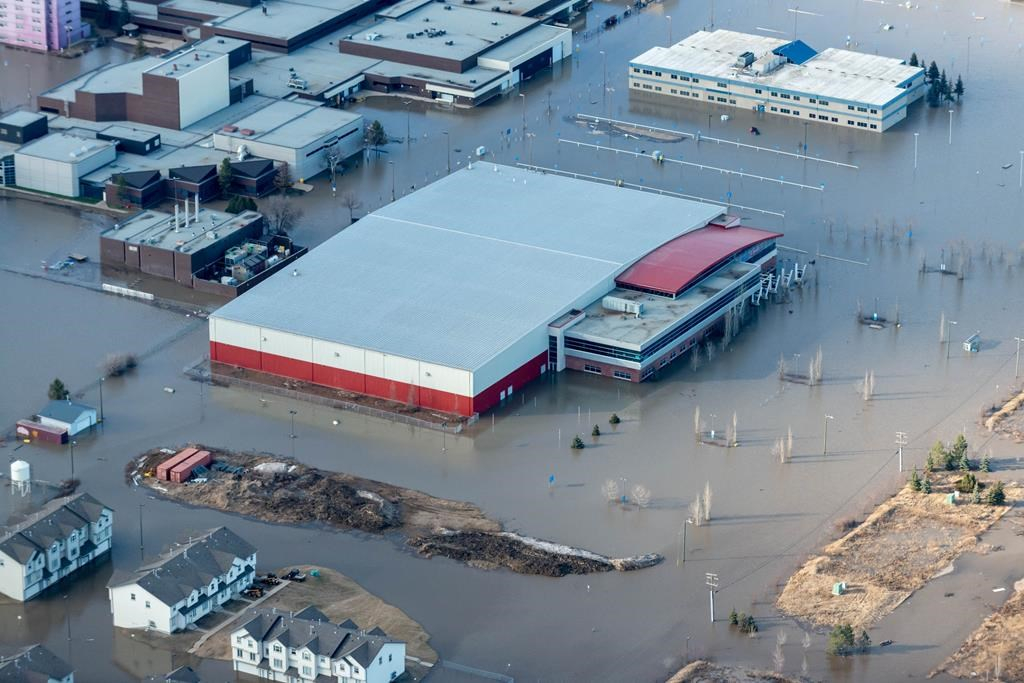 The flooded Syncrude Sport and Wellness Centre on the Keyano College campus in downtown Fort McMurray is shown on Tuesday, April 28, 2020. File photo by The Canadian Press/Greg Halinda
Previous story
Next story

As residents of Fort McMurray continued to assess their flood-damaged homes and businesses and began the difficult task of cleaning them this weekend, they also marked the anniversary of the start of an evacuation that emptied the northern Alberta city four years ago.

"It was evident on May 3, 2016 and it is evident today: we are a region of resilience," Mayor Don Scott said in a news release from the Regional Municipality of Wood Buffalo on Sunday.

Many of the evacuation orders that began last weekend due to the spring ice breakup on nearby rivers were lifted Friday. The flooding affected low-lying areas of Fort McMurray including its downtown, and close to 13,000 people had to leave their homes.

The Canadian Red Cross has been handing out cleanup kits that contain latex and work gloves, sponges, garbage bags, mops and scrub brushes. A boil-water advisory for the city remains in effect, so oil company CNOOC International supplied a tanker truck that pumped out potable water to people who brought jugs on Saturday.

A supermarket downtown, forced to close but not damaged, gave away free produce to the food bank, which distributed the items from the back of a semi-trailer on Saturday.

"The recent river breakup flood has reminded me of the incredible generosity of our residents. That generosity was on display on that evacuation day four years ago, where neighbour helped neighbour, and it continues today," Scott said.

The municipality announced on the weekend that emergency housing provided through the Red Cross was being extended until May 10 for people whose homes aren't safe to live in.

The fire in northern Alberta ignited deep in the bush on May 1, 2016, and exploded into a ferocious blaze that forced the evacuation of the entire city two days later.

More than 80,000 people fled as towering flames licked at their homes and crackled along the only highway out of the city. Flames consumed nearly 2,600 dwelling units, which were mostly residential.

Chief administrative officer Jamie Doyle said the fire evacuation was one of the most challenging days the region and the municipality has ever faced. But he also said that between COVID-19 and the flooding, staff have also been very busy in the emergency operations centre this year.

"Like May 3 four years ago, these emergency responses can be incredibly stressful on our staff, particularly if they have been directly impacted as a resident," Doyle said in the municipality's news release.

"If you have the opportunity, I encourage you to express your thanks to a member of municipal staff or to a first responder."

"And the historic flooding that we have seen in northern Alberta is an important reminder that we must be prepared for the worst," Madu said in a statement on Sunday.

This report by The Canadian Press was first published May 3, 2020.