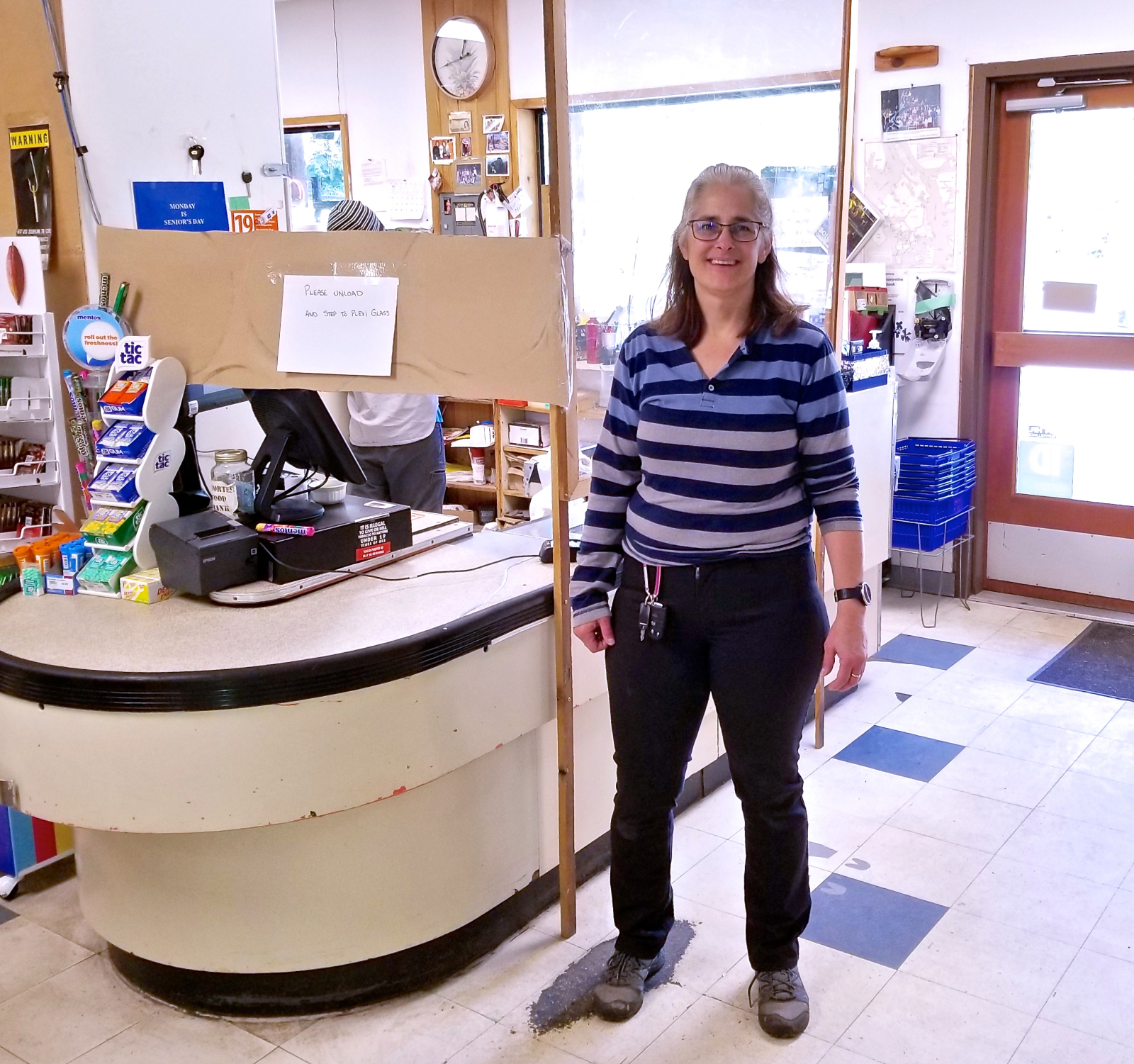 Bertha Jeffery, owner of the Cortes Market grocery store, is unequivocal about how critical her staff is in serving the store’s small island community during the COVID-19 pandemic.

But her niece and store manager, Wendy Lotnick, in particular, is why Cortes Island, B.C., residents can still buy the groceries they need at the market in Manson’s Landing on a daily basis, Jeffery said.

“I couldn’t do it alone … I’m not as healthy as I used to be and can’t stand for a long time,” she said.

“But her commitment is above and beyond. Most people wouldn’t go that extra step to make the sacrifices she’s making.”

Lotnick, 54, concedes the hours are long. She’s been working alongside Jeffery for nine hours a day, seven days a week since mid-March.

“It’s hard. But you’re doing what you have to,” Lotnick said. “But, we’re just getting to the point where we both might get one day off a week.”

Extra work and worry are part and parcel of the pandemic, but for Lotnick, the most difficult thing about being an essential worker is living apart from her family, to protect their health.

“I’m living with Bertha,” Lotnick said. “I don’t want to risk bringing something home to them.”

Both her husband and father-in-law fall into the high-risk category should they get COVID-19, and her one-year-old grandson Linus also lives in her home.

“The biggest thing is not being able to go home and play and cuddle the grandbaby,” Lotnick said.

“But without me helping Bertha at the store, we wouldn’t be able to keep it open and help the community."

“My mom won’t let me near her now. I totally understand it, but it makes me sad because we’re really close, and we’re huggers,” Quadra Island grocery store worker Emma Arps on the drawbacks of working during the COVID-19 pandemic.

But the sacrifices are worth it, Lotnick stressed. “Because my family is also part of that community,” she said.

Sandwiched between Vancouver Island and the mainland of B.C., Cortes is a tiny community of approximately 1,000 permanent residents with the only access to the island being plane, boat or ferry from neighbouring Quadra Island.

The island’s grocery stores play an outsize role in the lives of Cortes residents, Jeffery said.

“We offer a lot of services that are not actually part of the (grocery) business itself,” she said.

Islanders often phone up stores for updates on ferry delays or power outages, or use the stores to organize community initiatives or fundraisers, and as informal depots to pick up and drop off items for friends or neighbours.

“We are like a community centre in a way,” Jeffery says of the market. “It’s a social place. When people are lonely, they come to the store to talk to people.”

Despite the pandemic distancing protocols, that social connection still happens to some extent, she said.

“They still gather around the picnic table outside, we’ve just asked them to sit six feet apart.”

Eric Hargrave, general manager at the Cortes Natural Food Co-op, concurs, saying at the beginning of the pandemic, people got in and out with their groceries or utilized the store's delivery services to a greater degree.

But customers are starting to shop in person at the store again, he said.

“It’s still mostly transactional, but less over time,” Hargrave said. “Some people are starting to hang around outside and talk again.”

The Co-op’s essential workers have ensured residents don’t have to travel off-island to get food during the pandemic, Hargrave said

Prior to the pandemic, many Cortes residents would make the two-ferry journey into Campbell River on Vancouver Island to do a big shop.

But with BC Ferries and provincial health authorities asking people to restrict non-essential travel, more residents have been buying locally.

“Our business is up 30 per cent compared to last year,” Hargrave said.

The Co-op has boosted staff wages in recognition of their service during the crisis, although Hargrave said he doesn’t believe that made a difference for staff to continue working.

“I think it’s their commitment and service to the community,” he said.

“The extra pay helps, but it’s not enough to justify staying.”

Hargrave said one of the greatest difficulties staff face working at the Co-op during the pandemic is customers who aren’t willing to follow new health protocols at store.

“We have daily interactions with people who don’t know, or don’t care about the regulations,” Hargrave said. “And that’s a lot harder to deal with than any fear of the virus itself.”

“There hasn’t been anything too serious, but a few people have voiced their displeasure about things like waiting in lines outside,” Pain said.

But other people are leaving donations for staff, which are contributed to the weekly lunches Tru Value is hosting in recognition of its workers, Pain added.

“Lots of customers are grateful. And I’m very appreciative of staff’s efforts,” Pain said. “We’ve been through quite a bit together, as we navigate this new experience.”

Some Tru Value employees actually applied for work at the Q Cove store as the pandemic was ramping up.

Emma Arps, 21, said she hasn’t found working at the grocery store during the crisis too alarming or difficult.

Customers, overall have been good to her, she said.

“But occasionally we get people in who think (the safety protocols) are all nonsense, but they still keep their distance.”

The hardest part is not being able to have close contact with her mom, who is also an essential worker for BC Ferries.

“My mom won’t let me near her now,” Arps said. “I totally understand it, but it makes me sad because we’re really close, and we’re huggers.”

Lena Nielsen, 52, who works in the hospitality industry, took on the job when she realized the upcoming summer tourist season was collapsing.

She didn’t fully explore if she could get government benefits, and opted to work instead.

“I decided I would probably be much happier working and helping out,” Nielsen said.

She felt stressed about possibly getting sick in the early weeks of the pandemic, but less so now.

“But things have settled down and there’s not as many cases as people predicted on the island,” she said. “So I’m feeling more comfortable.”

She recognizes the public is generally thankful that she and her colleagues are still at work. But, she has some misgivings and thinks society’s gratitude might not be enough when it involves colleagues who had no option but to work.

“For me it was a choice, so I really enjoy the appreciation,” Nielsen said. “But being thanked for something you literally had to do survive can be a hard pill to swallow.”