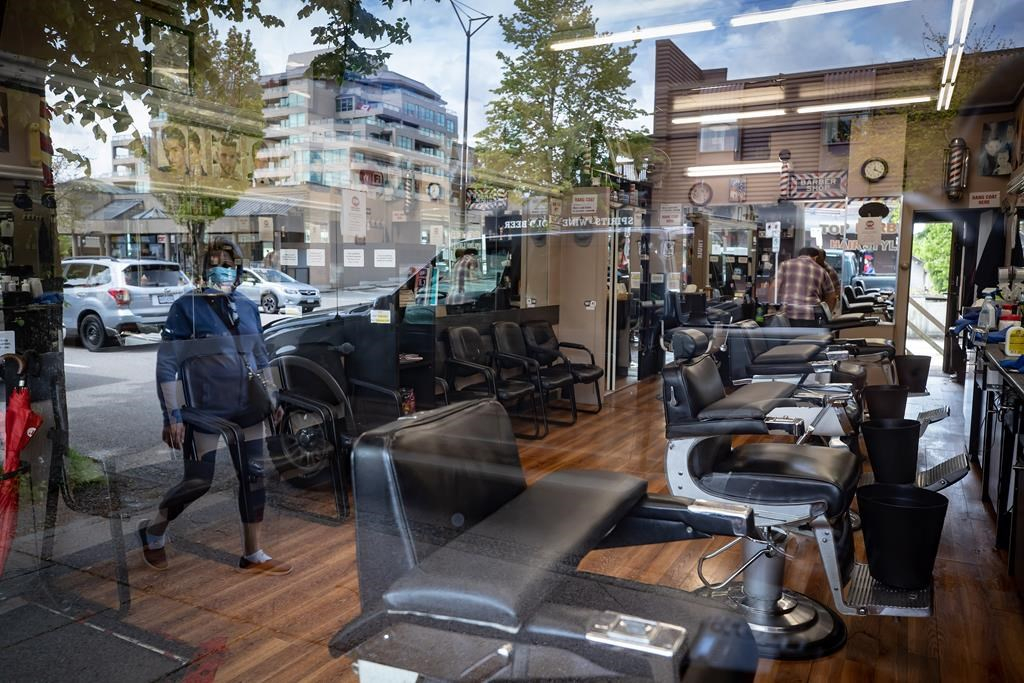 A man cleans inside a closed barbershop as a pedestrian wearing a face mask is reflected in the shop's window, in Burnaby, B.C., on Wednesday, May 6, 2020. Photo by The Canadian Press/Darryl Dyck
Previous story
Next story

British Columbia has reached the point in the COVID-19 pandemic where it will start a gradual reopening of the economy while also allowing social interactions between families, friends and communities to increase.

All of the government's reopening plans are based on organizations and businesses developing plans that follow provincial guidelines to control the spread of COVID-19, he said.

B.C.'s plan to lift restrictions implemented in mid-March to fight COVID-19 are a result of the steady decline of positive case numbers in recent weeks, but the reopening must be done carefully to prevent a resurgence of the virus, Horgan said.

"If we lose this discipline, everything we worked for to this point will be lost," he said. "We need to get it right. This is not a return to normal. We're going to the new normal."

Provincial health officer Dr. Bonnie Henry reported 23 new cases of COVID-19 on Wednesday and three more deaths. The province has had 124 deaths and 2,255 cases of COVID-19, with 1,494 people having recovered from the illness.

Horgan said B.C.'s reopening will look different than other provinces because much of the economy was not shut down.

Horgan said within days, the government will resume elective surgeries, reopen other health services, including dentistry, physiotherapy and counselling.

Under the guidelines, small gatherings of between two and six people among families and friends are allowed, while the prohibition on large social gatherings of more than 50 people is maintained.

Provincial parks will reopen for day-use only and the B.C. legislature will be recalled, he said.

"It won't be the flip of a switch. We'll be proceeding carefully," Horgan added.

Hotels, resorts and overnight camping in some parks will open in June if virus transmission rates remain low, he said. Some entertainment venues could follow in July, but not large concerts or sporting events.

"We can't congregate in large groups," Horgan said. "Some B.C. parks will be open in time for the May long weekend."

Earlier this week, the government released COVID-19 modelling data that suggested B.C. could double the current rate of contact most people have with others without causing a spike in COVID-19 cases. But returning to pre-pandemic lifestyles could be dangerous.

Horgan said he wasn't prepared to tell people they couldn't hug their mothers this weekend on Mother's Day, but urged common sense.

Horgan said some schools are offering services to students, but a full return to in-classroom teaching is not expected until September.

"We will continue to prepare for the full resumption of classes in September," said Horgan, adding he hoped this year's graduates will find some way to celebrate in the fall.

He said the government will support businesses to reopen safely.

Retail outlets must consider the safety of employees and customers, which could involve installing protective barriers at tills, suggesting online shopping and encouraging or requiring customers to wear masks, Horgan said.

"Everybody has to be confident as we move into the new normal," he said.

Horgan said he expects measures like not shaking hands and continuing physical distancing and prohibitions on large groups to be part of regular daily life for the next 12 to 18 months.

This report by The Canadian Press was first published May 6, 2020.

Below: posted by B.C. Premier John Horgan Thursday afternoon on Twitter. "We have to stop finger-pointing," Horgan said.

When I saw recent incidents of anti-Chinese racism, I was angry.

Hate has no place in British Columbia. Period.

We need to stand together, united against it, whenever we see it. pic.twitter.com/6C6eSOvBkc

By Colin Perkel | News, Politics | May 3rd 2020
Coronavirus in Canada

B.C. opens up COVID-19 testing to islanders with mild symptoms