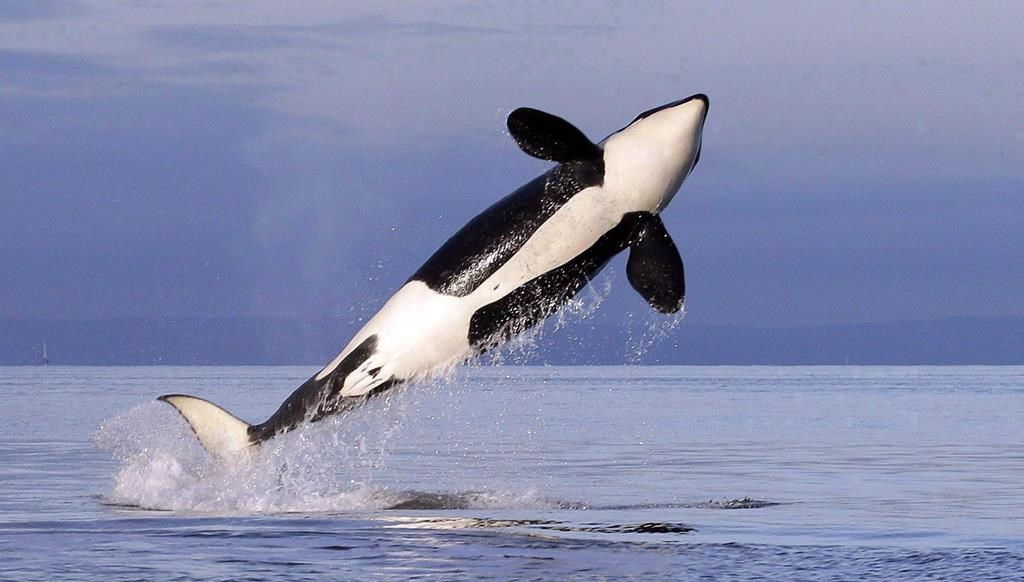 In this Jan. 18, 2014 photo, an endangered female orca leaps from the water while breaching in Puget Sound west of Seattle, as seen from a federal research vessel that had been tracking the whales. File photo by The Associated Press/Elaine Thompson
Previous story
Next story

The actions announced by several government departments Thursday include a ban on tourist or whale watching vessels with over 12 passengers until the end of June, a measure aimed at preventing the spread of COVID-19.

Areas of the Juan de Fuca Strait and Southern Gulf Islands will be closed for recreational and commercial salmon fisheries, with specific dates announced in June, the federal government said.

All fish harvesters are being asked to voluntarily stop fishing within 1,000 metres of orcas in B.C. waters.

Interim sanctuary zones established last year for the whales off Pender and Saturna islands will be back up from June 1 to the end of November, a month longer than 2019.

Fisheries and Oceans says the population of the southern residents has fluctuated between 70 and 99 whales since 1976, and their small population size and lack of calves means the unique family of orcas is "facing imminent threats to their survival and recovery."

Andrew Trites, the director of the marine mammal research unit at the University of British Columbia, said the orcas are in real trouble.

"Particularly with having so few births, having so few females in the population, having had a couple males dominate breeding, and then just all the added pressures put on the environment," said Trites, pointing to ocean noise, dwindling fish stocks and the warming ocean.

No vessels will be permitted in sanctuary areas with the exceptions of emergency and Indigenous vessels, while boats are also prohibited from coming within 400 metres of any killer whale starting June 1, the federal government said.

There is an exception to that rule in place for whale watching and tourism companies that receive federal authorization, allowing them to view all whales except southern residents from 200 metres.

Vessels are also asked to reduce their speed within 1,000 metres of a whale and turn engines to neutral if a whale is within 400 metres, a measure the government said is in place year-round.

Officially, there are 73 southern residents, but the Centre for Whale Research in Washington state said the most prolific male is missing and presumed deceased.

The federal government said a technical working group has identified and compiled guidelines for key contaminants affecting whales and their prey.

Terry Beech, a Burnaby MP and parliamentary secretary for the minister of fisheries, said the government has taken unprecedented steps to protect the southern resident population over four years.

"We've shown how far we're willing to go, and if there are measures that we can continue to take to protect this iconic species, all options are certainly on the table."

Beech said more decisions about the chinook fishery will be made in the coming weeks.

Trites said it's good to see the government take steps to create more favourable conditions for the endangered orcas.

The orcas haven't been seen in the Salish Sea the way they once were, he said.

"It's not clear if the whales have seen the memo of all the changes that the government has put in place to make things better for them," he quipped.

The whales' range extends south to California, and Trites said all jurisdictions must take action to ensure their survival.

"So much attention is focused on just the Salish Sea. It's like trying to save migratory birds by only protecting the bird feeder in your backyard."

He said it's not clear why southern residents are faring worse than their northern cousins, whose range extends from waters in B.C. to southeastern Alaska.

The northern residents, with four-times the population, may be getting "first dibs" on salmon returning to the ocean from coastal B.C., said Trites, adding the southern residents' habitat is also more industrialized.

With fewer vessels and noise in the water due to the COVID-19 pandemic, Trites said there's some hope that scientists will be able to observe a change in behaviour and gain insight into what's been affecting the whales.

This report by The Canadian Press was first published May 7, 2020.

We have all sorts of signage

We have all sorts of signage posted to stop humans from no parking, speed limits, red lights, u turns, height restrictions, and more. So why not buoys that have signs that indicate where the zones are and the penalties for entering the zones. The signs would be the warning. So the boater would have no excuse of ignorance and the enforcement would be an immediate fine. Certainly it is the orcas right to a live a peaceful existence in their home as we do.