Solar panels are more efficient than you’ve heard. This material could make them even better.

By Maddie Stone | News, Politics
#1349 of 1552 articles from the Special Report: Race Against Climate Change 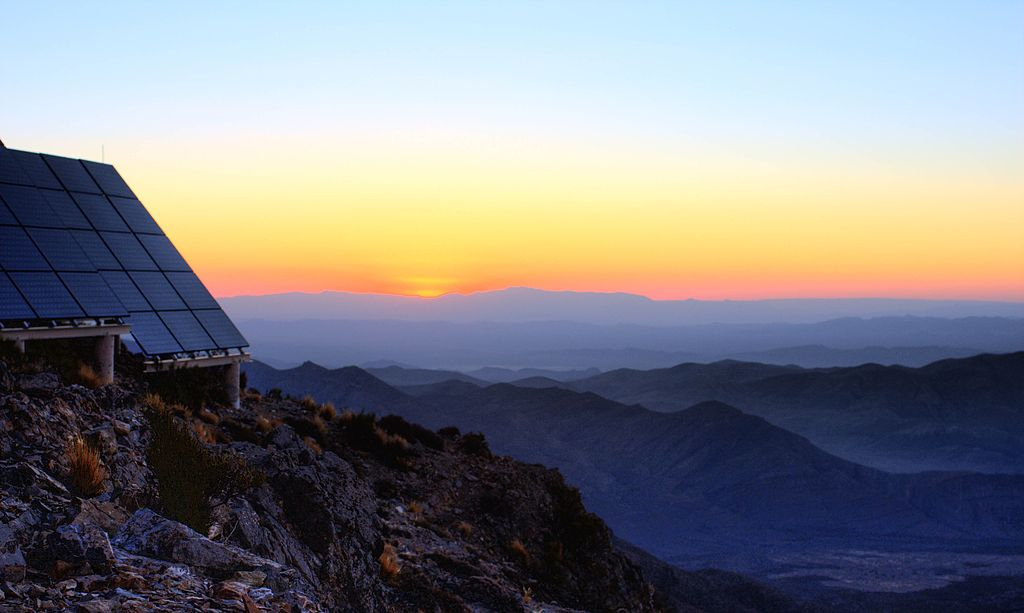 Renewable energy has been on the defensive recently. Following the release of Planet of the Humans, the controversial new climate change documentary executive produced by Michael Moore, fossil fuel–backed climate denial groups are bashing wind and solar power with renewed vigor, regurgitating the film’s flawed, ancient talking points about the supposed poor performance and unreliability of these energy sources.

Those talking points include the assertion that solar power is wildly inefficient, something director Jeff Gibbs demonstrates by visiting a solar farm in Michigan where photovoltaic panels convert “just under 8 percent” of the energy in sunlight to electricity. But that efficiency rating is, as the photovoltaic-focused publication PV Magazine puts it, “from another solar era”: Today’s typical silicon solar panels operate at around 22 percent efficiency. And a new crystalline material called perovskite could soon raise the solar efficiency bar much further.

Solar photovoltaic cells — the individual units that form a solar panel, like the shingles on a roof — are wafer-like devices made of materials called semiconductors that are capable of converting sunlight to electrical energy. But even the best semiconductors only capture a fraction of the light that strikes them. Sunlight spans a wide range of wavelengths, and depending on the properties of the semiconductor and the design of the cell, some proportion of that light is reflected, some passes through, and some is absorbed but converted into heat before the energy can be put to use. Designing new solar cells that convert a larger fraction of incoming sunlight into electrical energy, or that have a higher conversion efficiency in solar power parlance, is one of the most active areas of solar research today.

Perovskites first attracted the interest of the solar community a little over a decade ago, when scientists discovered this particular class of semiconductors has an outstanding ability to convert sunlight to energy. Today, perovskites are at the center of an effort to develop a new generation of thin-film solar cells that are cheaper than, and around four times as efficient as, the solar farm Gibbs visits in Planet of the Humans. The field is moving fast: In late April, the U.S. Department of Energy’s National Renewable Energy Laboratory announced it will be forming a U.S. Manufacturing of Advanced Perovskites Consortium (US-MAP) to accelerate the development of perovskite-based technologies.

According to US-MAP director Joseph Berry, the consortium will allow government researchers, academics, and private companies to pool resources and brainpower in order to tackle the biggest hurdle facing the commercialization of perovskite solar cells: Making these soft, easily degraded materials more durable.

“That’s where the challenge for this technology is,” Berry told Grist.

Perovskite refers to any compound that shares the same crystal structure as the mineral perovskite, also known as calcium titanate. The perovskites the solar industry is interested in aren’t mined from the Earth, but cooked up in labs. Inside these synthetic, or “hybrid,” perovskites, a mix of organic compounds, metals, and halides (reactive elements that include chloride, bromide, and iodide) sub in for calcium and titanium in the crystal lattice. Because of their unique structure and chemical composition, hybrid perovskites have a superpower: They’re remarkably good at absorbing sunlight. “They are kind of awesome in terms of their power conversion efficiency,” Berry said.

While silicon solar cells have a maximum potential efficiency of around 29 percent, a single perovskite layer can theoretically achieve efficiencies of closer to 33 percent. And by synthesizing perovskites that are sensitive to different parts of the solar radiation spectrum and stacking them to create a tandem cell, the efficiency can be boosted further — potentially above 40 percent, said Jao Van De Lagemaat, who directs the chemistry and nanoscience center at the National Renewable Energy Laboratory.

Solar panels are more efficient than you’ve heard. This material could make them even better.

“That’ll take an enormous amount of engineering,” Van De Lagemaat said. But some researchers have already demonstrated that devices with two layers of perovskites are more efficient than a single perovskite solar cell, he said. Traditional silicon cells can be made more efficient by adding perovskites, too.

Not only are perovskites inherently better at harvesting sunlight than silicon, it’s potentially cheaper to mass-produce solar cells that rely on them. While silicon cells are manufactured via a complex process that involves purifying silicon from quartz in a high-temperature furnace, perovskites can be fabricated at low temperatures using far less energy, from cheap and readily available ingredients. Companies are already working on a variety of low-cost techniques for applying perovskites to a supporting surface, like a piece of glass, to turn that surface into a thin-film solar cell. These include inkjet printers, perovskite-based sprays, and roll-to-roll manufacturing techniques similar to those used for newspaper printing.

But despite all their appeal, you can’t buy a perovskite solar panel to put on your roof just yet. The reason? Easy-to-make perovskites are also easy to unmake.

“The material itself intrinsically is not stable,” said Letian Dou, an assistant professor of chemical engineering at Purdue University.

Perovskites dissolve in water, and they don’t hold up well under heat — both of which are a problem if you’re trying to manufacture a device to function atop a roof for decades. When a solar panel is heated by the sun, Dou says, its temperature can rise as high as 160 degrees F. At those temperatures, ions inside perovskites move around very quickly, causing the molecular structure to degrade. Even at room temperature, some “ion migration” can occur, creating instabilities in the material.

However, emerging research suggests perovskites can be stabilized by tweaking the chemical recipe. Recently, Dou and his colleagues doped perovskites with a rigid molecule called a ligand, allowing the material to remain stable at temperatures of up to 212 degrees F. The research, published last month in Nature, is preliminary — the tests were done at the lab scale, and on timescales of days, not decades — but it points to a “promising direction” for making commercially ready perovskites, Dou says. In a March study published in Science, scientists at the National Renewable Energy Laboratory made perovskites using three halide elements instead of the usual two, and found that the material degraded less than 4 percent after 1,000 hours of continuous operation in sunny conditions.

The new US-MAP consortium aims to accelerate these efforts by enabling private companies, government researchers and academics to share new ideas and research facilities, and by encouraging them to join forces to conduct more ambitious tests. While all of the founding organizers are bringing their own research funds to the table, the consortium plans to seek additional funding from federal agencies like the DOE, as well as various state and local government programs and industry partners.

“The idea is we want to sort of band together,” Van De Lagemaat said. “There is quite a bit of research that can be done collectively that doesn’t really impact each individual company’s special sauce, but that really helps bring the entire area forward.”

Some of US-MAP’s commercial partners are already thinking about how to get the first perovskite solar panels out into the wild. Swift Solar, a California startup founded in 2017, is planning to stack two different layers of perovskites in tandem to create lightweight, high-efficiency solar cells that initially will be marketed for mobile applications like drones, satellites, and the lighting and air conditioning systems on trucks. Swift Solar co-founder Kevin Bush says vehicles are a good place for the first generation of perovskite solar panels to shine, both because portability is at a premium and because mobile markets “might only need five to 10 years’ stability, and it’s just a lot easier to promise that” right now.

“I think it’s nice to have markets that are initially not that demanding” in terms of longevity, Bush said, “so we can prove the technology out more.”

Van De Lagemaat doesn’t think perovskites will ever replace silicon wholesale in the solar power world. But he does think they will come to play “a very large role in the power market,” partly because rising solar efficiency and manufacturing improvements have caused the price of solar power to fall dramatically in recent years. While this price drop is good for consumers, it also means there’s less money to invest back into new silicon solar factories, which are expensive to build. Technologies that require less up-front capital investment, like perovskites, might ultimately be necessary to build the amount of solar power the world needs in the coming decades, he says.

If that hunch is correct, Planet of the Humans’ already outdated criticism of solar efficiency will soon feel prehistoric.