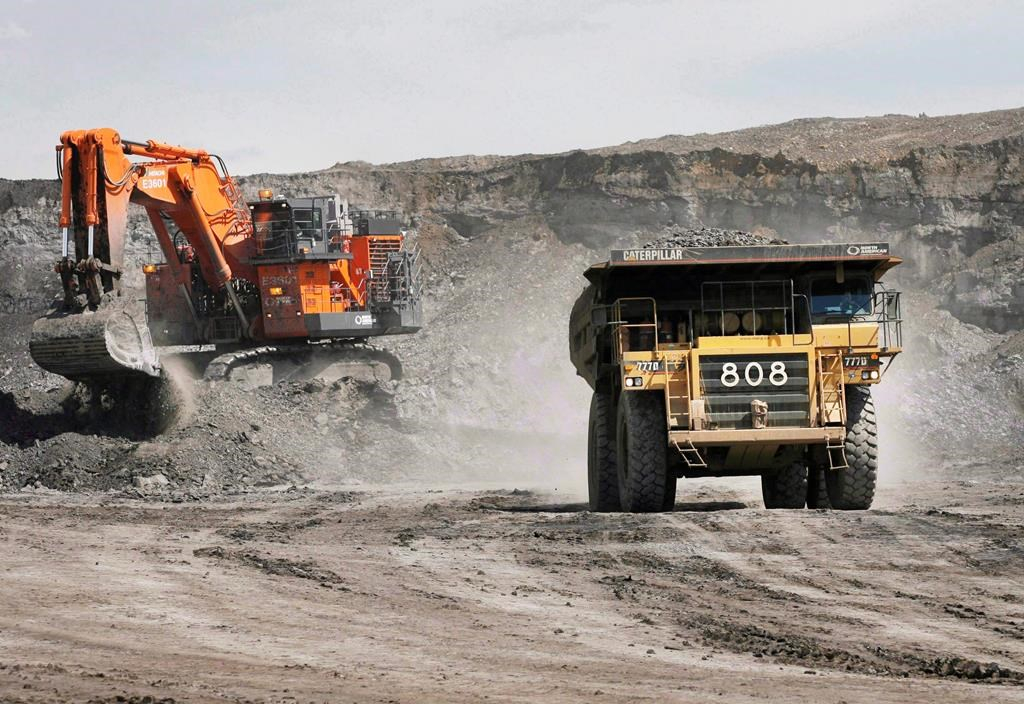 A haul truck carrying a full load drives away from a mining shovel at the Shell Albian Sands oilsands mine near Fort McMurray, Alta., on Wednesday, July 9, 2008. File photo by The Canadian Press/Jeff McIntosh
Previous story
Next story

A second outbreak of COVID-19 at an oilsands mine work camp in northern Alberta is concerning, observers say, but not even a vocal critic of the Alberta government's handling of the pandemic would shut those operations down.

The province relies too much on self-inspection and is too slow to take action on enforcement despite recent large outbreaks at meat-packing plants, said Gil McGowan, president of the Alberta Federation of Labour.

He added workers in the first oilsands mine outbreak at the Kearl mine should not have been allowed to spread the virus to other communities.

"We're not necessarily saying shut down these operations but we are saying put an end to the fly-in, fly-out approach to staffing the projects for all of them," he said in an interview on Thursday.

"Given the fact we have so many unemployed tradespeople here in Alberta, there's no justification for continuing to fly in hundreds of people from other provinces. We could do the work ourselves and avoid the risk of spreading the infections beyond our borders."

On Wednesday, the province reported there had been five confirmed COVID-19 cases at the Horizon oilsands mine camp operated by Canadian Natural Resources Ltd., the minimum number to declare an outbreak.

A larger outbreak reported last month at the Kearl oilsands mine operated by Imperial Oil Ltd. had grown to 107 cases, it said.

Kearl's ability to continue to operate and produce oil while taking measures to deal with the outbreak has been reassuring for investors, said oilsands analyst Phil Skolnick of Eight Capital.

"At Kearl, there have been no repercussions, production is still going on," he said, adding the industry is expected to continue as normal because Alberta Premier Jason Kenney has declared upstream oil operations essential.

Other oilsands producers throughout the industry are slowing work and reducing staffing levels to reduce the risk of transmission, Skolnick added.

Earlier this month, Imperial said it would extend a planned one-month maintenance shutdown of one of its two production trains at Kearl by an extra month to allow more distancing between workers.

Those decisions have the added benefit of reducing production at a time when oil prices are at low ebb because global demand for energy products has fallen during the pandemic, Skolnick said.

Alberta’s chief medical officer of health Deena Henshaw said Canadian Natural has reacted to the Horizon mine outbreak in an appropriate manner.

"Testing is being offered to all employees, including those without symptoms, and I'm confident that the spread can be contained on this site as all measures are being taken to do this," she said.

She reported speaking with other camp operators in the region earlier this week and found they were co-operative and aware of measures they should be taking before and after an outbreak is discovered.

"When you think of the thousands of people that go in and out of these camps on a regular basis, the fact that at Kearl Lake we now have 107 cases ..., (now) we've had a small recent cluster, but again I think it's a testament to the work that's been done to reduce spread," said Henshaw.

Canadian Natural said one of its maintenance service workers was confirmed on May 2 as positive for COVID-19. The person had completed a shift on April 28 and experienced symptoms after returning home.

In a separate case, Canadian Natural was notified that an employee of its camp services provider at Horizon tested positive on April 29.

Measures taken to control transmission include limiting numbers on air and ground transport so that physical distance can be maintained, and requiring face masks on flights and buses, the company said.

It said flight times are being adjusted to reduce the number of people waiting for planes and passengers must sit with empty seats between them on planes and buses.

All employees are being pre-screened before entering the site and have their temperatures checked. In camp, some dining hall seating has been removed and food is being served by camp staff or prepackaged, the company said.

You can go shopping in Ontario on Tuesday, but you can't visit family

By Emma McIntosh | News, Politics | May 14th 2020
Coronavirus in Canada