By Giuseppe Valiante & Sidhartha Banerjee | News, Politics
#570 of 1611 articles from the Special Report: Coronavirus in Canada 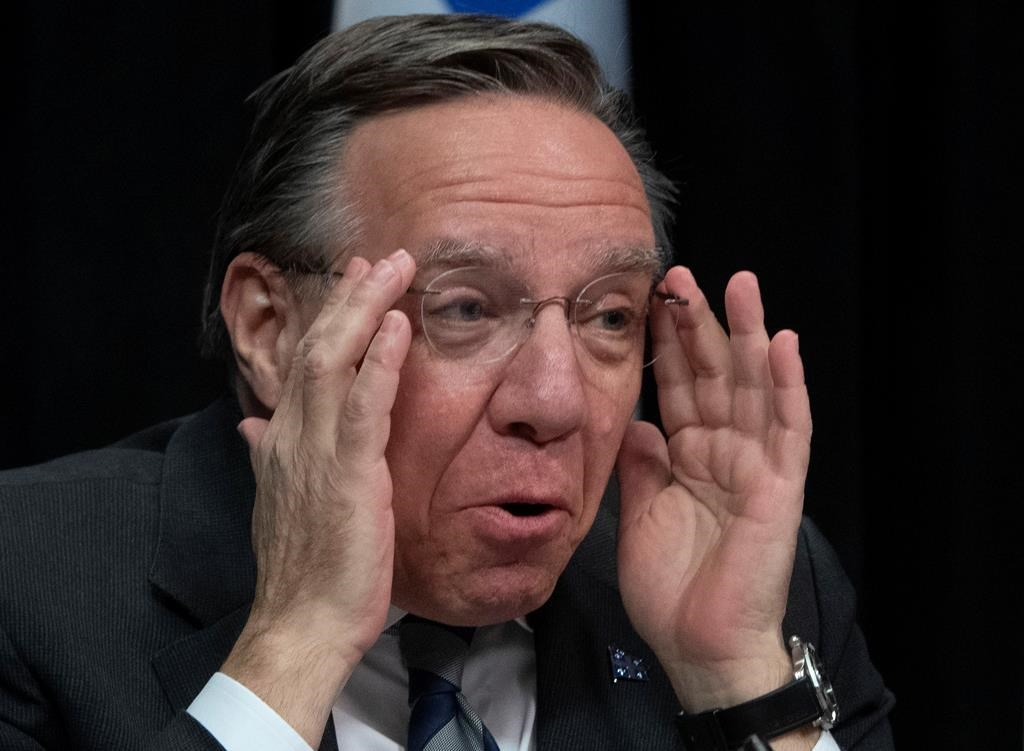 Quebec Premier Francois Legault shows off the glasses he now wears, during a news conference on the COVID-19 pandemic, on Wednesday, May 13, 2020 at the legislature in Quebec City. Photo by The Canadian Press/Jacques Boissinot
Previous story
Next story

For the first time since the beginning of the COVID-19 pandemic, Quebec Premier Francois Legault visited Montreal on Thursday, to announce the province recorded 131 new deaths linked to the virus — 91 of them in the hard-hit city.

Montreal — the epicentre of the COVID-19 contagion in Canada and Legault's hometown — is still so "fragile," the premier said, that he had little choice but to cancel the rest of the school year for elementary students in the area.

Legault took some responsibility for the repeated failures to bring the contagion in Montreal under control, especially within the city's long-term care homes, where the majority of the province's deaths have occurred. But it's Quebecers as a whole, he said, who have let this happen to Montreal.

"I think the society failed," he told reporters.

There are three times more seniors in long-term care homes in Quebec, per capita, "than anywhere else in the world," Legault said. Those centres were underfunded and understaffed for years, he continued, and the people who worked there were underpaid.

Hundreds of members of the Canadian Armed Forces have now been dispatched to the province's long-term care homes to help feed and care for the residents. Legault confirmed Thursday that the Forces' mandate had been extended until June 12.

Daycares in the greater Montreal area, which had a tentative reopening date on May 25, now have to remain closed until at least June 1, the premier said. Authorities still haven't made a firm decision about whether or not to push back the May 25 reopening date set for retail businesses in the city.

"We will still give ourselves a few days to take a decision on retail businesses," Legault said. "A crucial element that would help us to reopen is for the majority of people to wear a mask in public."

But Legault didn't come to his hometown bearing only bad news.

The number of people hospitalized in the province diminished by 42 compared with the day prior — the biggest drop since the beginning of the crisis. Quebec now has 1,834 people in hospital with COVID-19. The number of people in intensive care also came down over the same period, to 190 people, a reduction of four.

Dr. Horacio Arruda, Quebec's director of public health, said when the data comes in for the number of tests administered on May 13, "I expect us to go over or hit the number that we set."

Data from the province's institute for public health, however, said only 6,401 individual people had been tested on May 13. Some people are tested multiple times a day, according to the Institut national de sante publique, such as health workers.

Mylene Drouin, head of public health in Montreal, said the city has surpassed its goal of conducting more than 3,000 tests a day. She said 3,411 tests were conducted May 12.

Legault is scheduled to spend two days in Montreal, and had planned to meet with the heads of the city's main health care centres Thursday afternoon.

By The Canadian Press | News, Politics | May 11th 2020
Coronavirus in Canada