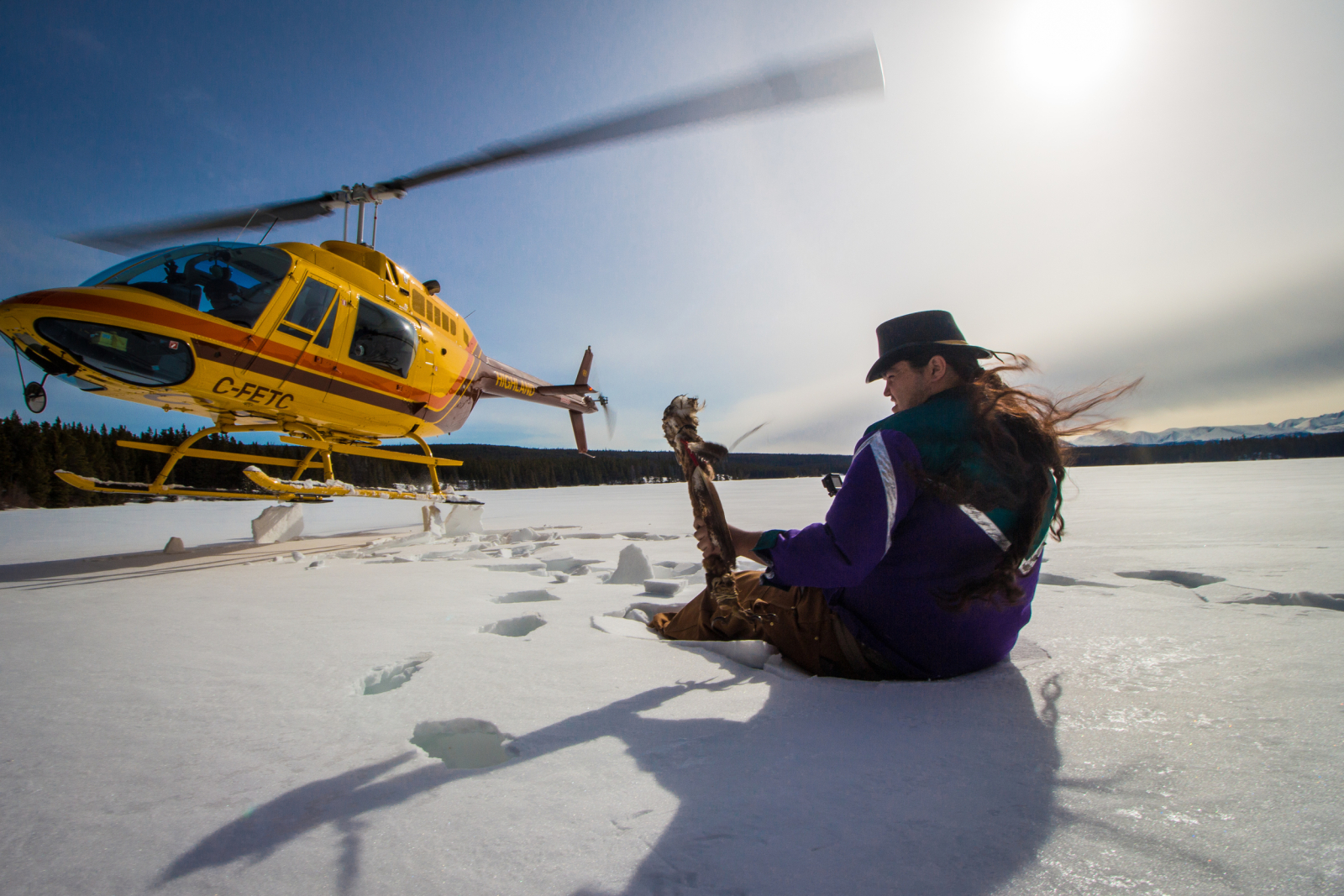 Tŝilhqot'in spiritual ambassador Peyal Francis Laceese lands at Teẑtan Biny last March for a water ceremony in the middle of a battle against Taseko Mines. Photo by Emilee Gilpin
Previous story
Next story

As all six communities comprising the Tŝilhqot'in Nation continue to deal with COVID-19, good news Thursday morning gave people something to celebrate. The Supreme Court of Canada denied Taseko Mines Limited's application for leave to appeal, shutting down its $1.5-billion proposed open-pit copper and gold mine for good, 30 years after the battle began.

“It's been a 30-year battle, involving former and current leaders, a long list of people dedicated to this, guided by our ancestors,” elected Chief Jimmy Lulua of the Xeni Gwet'in community told Canada's National Observer over the phone Friday. “Our war chiefs laid a bread-crumb path for us on how we should be fighting for our lands, laying it all on the line, and that is the mentality our nation carries. We don't know how to lose, we'll go down fighting.”

Lulua has been chief of Xeni Gwet'in for the past two years. He works with the other five elected chiefs, meeting over Zoom weekly and sometimes biweekly during COVID-19 to continue to stand as one unified nation, he said. This massive victory has been the first sigh of relief in 30 years, as all Tŝilhqot'in (known in English as Chilcotin) people can finally say their sacred Teẑtan Biny and Nabaŝ, (Fish Lake and surrounding area) will not be devastated by exploratory-mining activity.

These areas are used for cultural and spiritual activities, burial sites, Chinook and Sockeye salmon spawning grounds and a deer crossing where young people will shoot their first deer as a rite of passage.

Canada's National Observer reached out to Taseko Mines for comment, but has yet to receive a response.

Thursday's news that the Supreme Court of Canada would not hear the leave to appeal is just the latest move in a decades-long legal ping-pong game. Taseko’s “New Prosperity mine” has been rejected twice at the federal level, by former prime minister Stephen Harper, who led a Conservative government from Feb. 6, 2006, to Nov. 4, 2015.

Taseko’s original project (then called the “Prosperity mine”) received its environmental-assessment certificate from the Province of B.C., with 103 recommendations for the proponent, but the project was turned down at the federal level on July 2, 2010, due to its environmental and cultural impacts. The company applied again, with modifications to its proposal, and on Sept. 29, 2011, the province granted approval to carry out “exploratory work,” sparking a blockade by Tŝilhqot'in Nation members.

A little over a month later, the federal government called for a review of the New Prosperity mine by a second independent panel, which in 2014 concluded the proposal carried too many adverse effects. Ottawa rejected the project a second time.

Taseko filed in court for judicial review of the federal panel’s report, and later filed a review of the rejection. On Jan. 14, 2015, the province granted a five-year extension of the environmental-assessment certificate. In 2016, Taseko started to prepare a new exploratory program, several times the scale and magnitude of the drilling program that faced a blockade in 2011. This new drilling program was rejected by the Tŝilhqot'in on the grounds the activity was for a mine that had been rejected twice.

On July 17, 2017, the drilling program was approved by Rick Adams, a senior inspector for permitting with the province's ministry of energy, mines and petroleum resources. Taseko’s plans to proceed that year were thwarted by not just the Tŝilhqot'in appealing the approval in court, but also court proceedings brought by the federal government, which unsuccessfully argued in the B.C. Supreme Court of Appeal that the magnitude and purpose of the drilling program constituted the company actually beginning construction of the rejected New Prosperity mine.

In 2018, when Canada failed to block the drilling, the Tŝilhqot'in reactivated their court proceedings. On March 1, 2019, the B.C. Court of Appeal disagreed with the Tŝilhqot’in and upheld the drilling permit. The nation filed an injunction from the B.C. Court of Appeal on March 22, 2019, which was granted on Sept. 6, 2019. In December, the Federal Court of Appeal dismissed the company's appeals of the 2013 panel report and 2014 federal rejection of New Prosperity, to which the company applied for leave to appeal these decisions in the highest level of Canadian courts.

Finally, on May 14 of this year, the Supreme Court of Canada dismissed the proponent's application for leave to appeal, shutting down the massive mining project and all associated activities in Tŝilhqot'in territories for good.

“This has been a spiritual fight. This is a legal fight, Lulua said. “The wars have changed, but now we are laying a bread-crumb path for the next generation to follow, or even other nations to take notes. I don't know any other nations that have defeated a mining company of this size.”

“It is a good day for Aboriginal rights and title”

In 2014, the Tŝilhqot'in became the first nation in Canada to have proven Aboriginal rights and title in the highest level of court in a case that took 25 years. It became a landmark decision in a country that continues to grapple with land claims, treaties, rights, title, territorial relationships and pre-existing Indigenous systems of governance. Just as the 2014 rights and title victory was a big day for the Tŝilhqot'in people, Lulua said this win against Taseko Mines is also history in the making.

The Tŝilhqot'in people are governed by traditional laws and governance, laid out by previous leaders and war chiefs, many who laid down their lives to protect their rights, title, territories and ways of life. The Tŝilhqot'in make decisions guided by elders, women's council, elected leaders and knowledge carriers, and community meetings are rich with the Tŝilhqot'in language.

“It shows what you can accomplish when you are a united nation,” Lulua said.

congratulations to the nation

congratulations to the nation.
Excuse my irreverence , but I have been saying for a few years now that it will be first nations and the kids who save our asses (and planet) if at all.
First Nations' wisdom to protect land water and air is the only way to the future. Soon, very soon, settler culture will wake up to the need to protect and cherish all living systems as our brothers, sisters, cousins--that we are part of a web of life not independent from it----or we will envy these islands of sanity and livability--assuming they can continue to exist independently from the waste land we still seem blindly to be hurtling towards.

For example, the Six Nations wind turbine and solar farm on the former Nanticoke coal fired power station is the biggest green generating project in Ontario. Who knows that?? It is never referenced in corporate news media--that's for sure!!!! It is not lauded as something that should be replicated everywhere possible. There is not discussion about changing regulations to allow small neighbourhood generation of solar not controlled by OPG. I learned about the Six Nations project (ongoing since 2012) on APTN. Great show, "Power to the People"

FINALLY!!! So if the Tsilhqot

FINALLY!!! So if the Tsilhqot'in elected chiefs can accomplish this magnificent feat, is there hope for the Wetsuweten elected chiefs? Sure hope so, as we're rooting for them!!

Thanks for this, Valerie.