Movies to stream (like Beyond Moving, Castle in the Ground) or to avoid (The Wrong Missy) 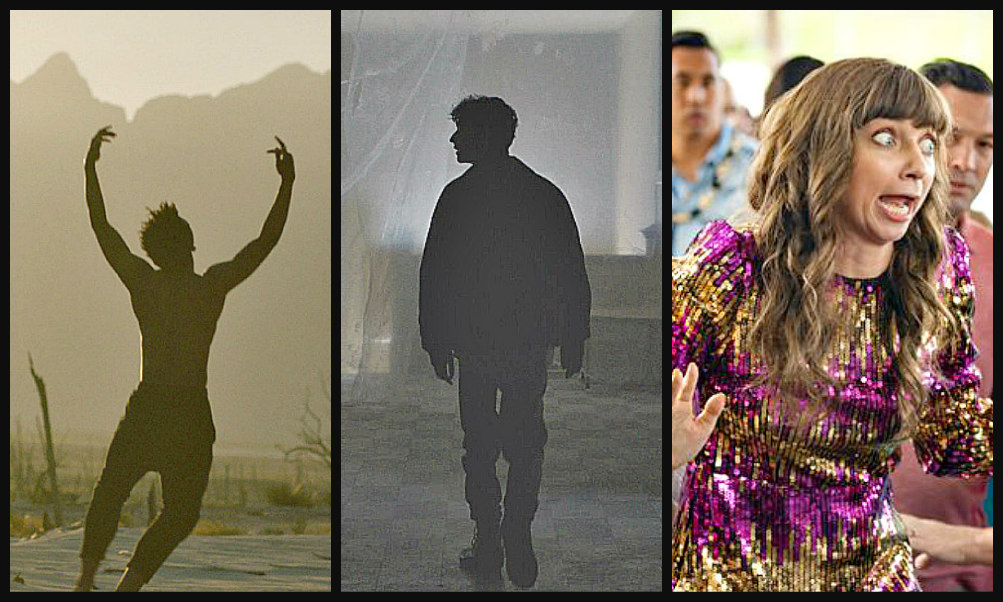 You’ve got many movies newly available to stream this week. Most are small or medium films, several are Canadian, and two of today’s offerings are documentaries. Watch out for the rejects, though. They’re in here, too.

BEYOND MOVING: A naturally talented dancer is found in South Africa, where dance is an integral part of the culture. He's recognized by a teacher while still a young child, trained and later accepted into Canada's National Ballet School and then the National Ballet Company. It's an inspiring personal journey that we see Siphe November take from the townships to world stages. We see those early years in footage his teacher took. There's friendly competition with his brother and life with his loving mother. And other memories collected recently.

We get a lot of examples showing his talent, back then and now, in rehearsals and performances. His movements are fluid and playful and commentators note his ability to connect them to the music. "He has a gift." A competition in Holland is a highlight. It gained him international attention. A trip back to Africa shows a bit of a downside. His former teacher (now dead) thought he'd become aloof and separated from his roots. It's an issue that clearly interests Vikram Dasgupta, the director. So this film is more than a biography; it's a guide for moving up the right way. (Streaming at https://viff.org/ and this website https://www.blueicedocs.com/) 4 out of 5

CASTLE IN THE GROUND: This drama about drug addiction starts out wonderfully, but in another place. A young man (Alex Wolff) takes care of his mother (Neve Campbell), who is bedridden with some kind of painful illness. The bond between the two is palpable and warm. He crushes pills for her and tries to console her when she has to decide whether or not to start a complex medical regimen all over again. The film is sensitive and quietly affirming in portraying their bond. But then she dies and another movie takes over.

He starts taking her pills (oxycontin, apparently) and it seems uncharacteristic. He had seen too much of what they did to his mother’s psyche and, yet, he goes ahead. He had been repeatedly annoyed by the loud music and the hard-knocking visitors to the apartment across the hall and, yet, strikes up a relationship with the woman who lives there (Imogen Poots, as a charming/fiery drug user). She drags him down into the lifestyle and then into a crime thriller (set in Sudbury, by the way) about a stolen bag of drugs and some punks who want it back. That part of the story doesn’t seem a natural progression from the one at the start. We’re now into scenes with guns and cheap bars, typical perhaps of that world, but untypical for what we’ve learned about the central character. The film is well acted, though, and moves with a snappy pace, as directed by Joey Klein. He’s a former actor and brings out the tenderness of those early scenes to very good effect. Also, the initial attraction for each other by the two leads. Not all of it, though. (Available as of today on digital and VOD.) 3 out of 5

THE WRONG MISSY: I haven’t had much luck with original comedies on Netflix. This one is even worse than my previous experiences. It’s loud, wise-acre toned, full of cheap jokes and very low language, and don’t let the kids call it up. There’s lots of sex and at the end a song that’s actually pornographic. All this thanks to Adam Sandler’s production company, Happy Madison, and a director, Tyler Spindel, and two writers who have fun with the usual tropes of romantic comedies. Too bad their version isn’t that much fun for us. It feels contrived and belaboured.

There is a contemporary pitfall, I guess you could call it, that the film illuminates. Imagine you have a bad date with a woman named Missy, then meet a perfect other woman with the same nickname, but accidentally text an invite to the first one, because you haven’t dumped her number from your phone. Could happen. Happens to David Spade, who takes the wrong woman to a company retreat in Hawaii where he expects to be up for a promotion. This Missy (Lauren Lapkus) is loud, eccentric (“Thirty-five years on this planet and not one STD.”), and abrasive, but somehow charms the company CEO and then turns his wife against him. There’s an incident with sharks, a Siegfried and Roy joke (bad timing, that) and an inadvertent mission statement in a hypnotic message by Missy “to throw away the restraints of adulthood.” (Netflix) 1 out of 5

THE ROADS NOT TAKEN: Another film about dealing with a needy parent, but this one is much more tender and realistic. Javier Bardem plays a man in New York, originally from Mexico, impeded by dementia. Elle Fanning (terrific) plays his daughter, ever patient but hard-pressed to put up with his inabilities. She wants to take him to the dentist, then an optometrist, but has trouble even getting him in a taxi and making him understand what’s required. Open wide? Read the letters you see? Almost impossible.

Dad drifts off repeatedly with memories of other lives. We don’t know if he lived them or just imagined them. In one, he’s married; Salma Hayek is his wife. She walks out on him and in a later vision, meets him at a memorial service. He cries about a son he’s lost. In other memories, he’s a writer in Greece trying to talk story structure with a couple of young female tourists. The three lives clash. New York traffic noise, for instance, turns into a heavy sea at night.

The film has a turgid pace for the first half or so, and is hard to watch. But it picks up, and anybody who’s ever cared for a senile parent will recognize that the ambience is absolutely authentic. Writer-director Sally Potter drew on her own experience caring for a brother with early onset dementia. Her film is well-intentioned, but hard to like. (Video on demand, as of Tuesday.) 2½ out of 5

RED ROVER: This amiable Canadian comedy spins off from an actual promotion to colonize Mars. A Dutch businessman floated it, planned a reality TV show to pay for it and then watched it collapse before it even started. A similar project in the movie attracts a nebbish geologist (Kristian Bruun) in Toronto, where he’s humiliated and then fired by an arrogant boss. His ex-wife and her new boyfriend also belittle him, and his only consolation is his hobby: Searching on a beach with a metal detector. This time, he meets a free-spirited young woman (Cara Gee), who invites him to a CD release party and inadvertently hands him a flyer for the Mars project. In his imagination, he feels the pull.

He watches an internet video trumpeting, “The greatest advance in the history of our species,” goes in for an interview, and even builds a cardboard mockup of a Mars Lander in his tiny apartment and sleeps in it. He also goes to the singer’s release party and hears lyrics like, “I’m stuck … locked in.” But he’s not a meek loner anymore, and even his old boss wants him back. It’s a fanciful but evocative picture of a dreamer trying to change. It’s light, pleasing entertainment co-written and directed by Shane Belcourt. (It came available this week on several platforms, including iTunes, Google Play and VOD at Vimeo, Bell and Shaw.) 3 out of 5

WASESKUN: Another very good documentary the National Film Board is streaming for us. It’s free. This one visits a correctional facility in Quebec where Indigenous offenders are given a chance to change themselves through Native healing and philosophy. I’m not clear whether it’s like a prison; I don’t see any guards or even fences. In one scene, one man is told where the property line is; past it is a neighbour’s land.

What we do see are burly guys working at crafts and woodwork, model canoes and such, carving a pole, drumming and chanting and talking about their life. Several are extremely articulate talking about dysfunctional family lives, violent dads and the other factors that made them violent. One says he put nine men in hospital in a single evening. One regrets breaking five little hearts (his children). Another regrets hurting his wife and now says, “I’ve become a real man.” From what the film shows, I'm not sure what role Native healing had in getting these men to understand themselves, but the scenes are moving and heartfelt. Filmmaker Steve Patry spent a year gaining their confidence to get them to open up like that. (https://www.nfb.ca/) 3½ out of 5

PORNO: The production company calls itself, “A thoughtful, low-budget horror film LLC.” OK, that’s the intent. But only the midnight movie crowd will think it achieved that. Teenagers stuck together for a scary night is what it delivers. There are five of them, allowed to stay late for a private viewing at the movie theatre where they work. A creepy old guy won’t leave, runs amok and disappears while also breaking open a secret door into a storeroom nobody knew was there. There are old decaying reels of pornography film in there, one of which is still playable and gives the teens a stark education.

They’re good kids in a small God-fearing town in 1992 and their virtue is about to be tested. The film (Is it art or porn? they ask.) shows a psychedelic montage with a naked woman, a female demon known in old folklore as a succubus. She writhes amid sparks and clouds of light in what looks like a satanic ritual, then materializes for real and, one by one, tempts the teens seductively. Each has a secret desire that she plays on. Interesting idea, reminiscent of other horror movies and directed with some flash by first-timer Keola Racela and played by an eager cast. But there aren’t many scares, just recurring challenges to the teens’ religious beliefs as the demon tries to steal their souls. Some of it is comic, but watch out for the gross-out genital mutilations on a couple of guys. (Available as of this week on video on demand.) 2 out of 5

SCOOB!: There’s big nostalgia for the 1980s these days and this could be the most fun new movie this week. However, Warner Brothers declined to provide a preview copy, so I can only tell you some background. A TV favourite of my son growing up, Scooby-Doo is the dog, who with a group of human teens collectively known as Mystery Inc., solved hundreds of cases over the years. He’s remained popular all that time through various formats, TV, books and movies, and this one is an origin story.

Scooby and his pal Shaggy, seen here then and now, are long-time friends. This tells how that came about and how they joined up with Fred, Velma and Daphne. They also have to foil a scheme to unleash the ghost dog Cerberus on the world. A “dogpocalypse,” the studio calls it. There’s a fine cast: Will Forte, Mark Wahlberg, Zac Efron, Ken Jeong, Amanda Seyfried, Henry Winkler, Simon Cowell, and many others. It’ll cost you $19.99 to rent for 48 hours. This site https://www.watchscoob.com/ will tell you where.