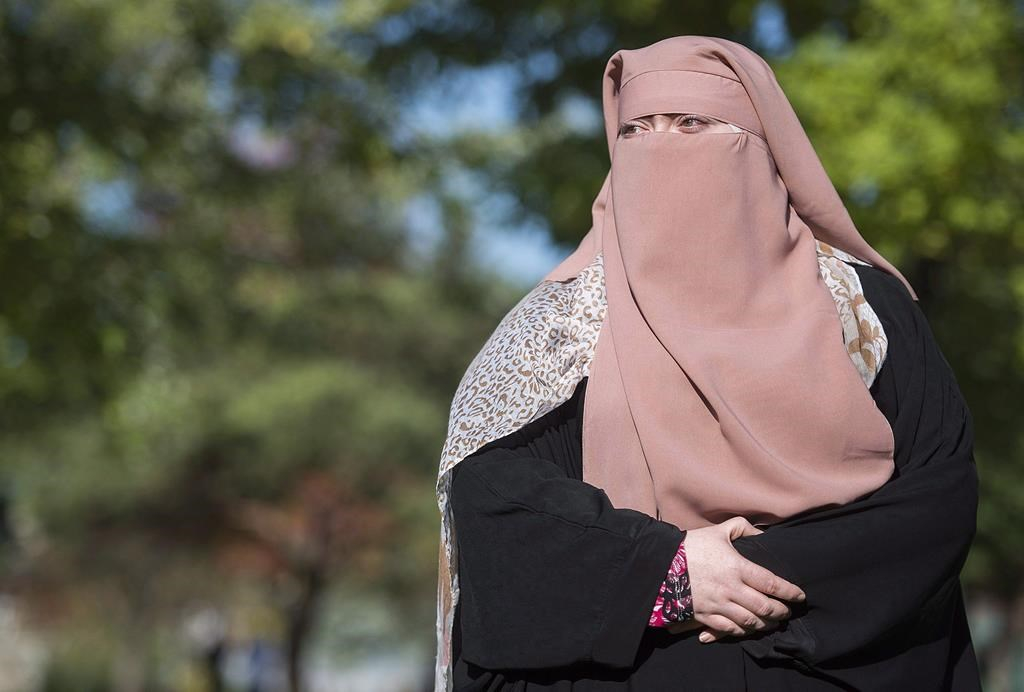 Warda Naili poses for a photograph at a park in Montreal, on Saturday, October 21, 2017. File photo by The Canadian Press/Graham Hughes
Previous story
Next story

Three years ago, Warda Lacoste was at the centre of a fight against Quebec's attempt to ban religious face coverings for people who were giving or receiving public services.

The Montreal woman says she was spat on, verbally harassed and even had a bottle of beer thrown at her when she was out in public wearing a full-face veil, known as a niqab, in that time of heightened tensions.

Lacoste (who previously went by the surname Naili) said the experience marked her. "It was quite a challenge," she said in a recent interview.

The rules against face-covering proposed by the provincial Liberal government of the day were suspended after a court challenge, but they were revived last year as part of the Coalition Avenir Quebec government's secularism law, Bill 21.

These days, Lacoste, 36, said there is something strange about seeing Quebec Premier Francois Legault urge Quebecers to cover their faces in public to prevent the spread of the novel coronavirus.

Lacoste recognizes the COVID-19 crisis is real in Quebec, which has recorded more than half of all the confirmed cases in Canada. "But of course, we can't ignore that the situation has an ironic side," she said.

For over a decade, heated debates have swirled in Quebec around issues of secularism, the accommodation of religious minorities and whether the government should regulate religious symbols in the public sphere.

The Legault government's Bill 21 bars some public-sector employees in positions of authority from wearing hijabs, kippas, turbans and other religious dress at work. It also stipulates that people receiving and giving public services must do so with their faces uncovered, though there is an exception for anyone "whose face is covered for reasons of health."

This week, the premier said he "strongly" recommends that Quebecers wear protective masks, especially on public transportation, to try to prevent the transmission of COVID-19.

The Quebec government is donating one million masks to the City of Montreal, the epicentre of the provincial outbreak, Legault announced on Friday. It is also sending $6 million to public transit agencies in the Montreal area to distribute free masks to riders.

Legault has not made wearing a mask mandatory, however, telling reporters that it would be legally difficult to implement such a measure. "We're not excluding it, but for right now, we're not there yet," he told reporters on Wednesday.

As Quebecers cover faces for COVID-19, some hope for tolerance of religious garb

The comparison between Quebec's secularism law and the COVID-19 mask directives is clear, said Jeffrey Reitz, director of the ethnic, immigration and pluralism studies program at the University of Toronto's Munk School of Global Affairs and Public Policy.

But he said people have largely avoided connecting the two issues because while medical masks and religious face coverings may be similar in practice, they symbolize different things.

COVID-19 masks make people feel secure and that "they're being protected from possible disease," Reitz explained, whereas "there are very strong stereotypes that people have of Muslim women wearing traditional clothing," such as face coverings.

"That mainstream perception is actually based on no facts at all, but just on these fears and stereotypes," he said.

Recent polls show that a majority of people in Quebec support a ban on religious symbols in the public sector, and Reitz said he doesn't expect the COVID-19 pandemic to drastically change Quebecers' perceptions of religious face coverings.

Lacoste said she would love it if wearing a mask during the COVID-19 pandemic would eventually shift the discussion around religious face-coverings in Quebec, as well.

She likened the feeling of being stared at and judged for wearing, or not wearing, a mask these days to what Muslim women often feel when they go out in public wearing a niqab or headscarf.

Lacoste says she stopped wearing a niqab last August for practical reasons — to make it easier to find a job and a new apartment — and for her own security, but she said she still believes women should have the right to choose what they wear.

"I hope (this situation) will create something positive, in the sense that ... women who wear the niqab will be seen less like aliens," she said. "Maybe people will learn that there is a person underneath."

This report by The Canadian Press was first published May 16, 2020.

This article is typical of

As mentioned in today's National Observer article from the "Canadian Press on Asylum seekers find work in Quebec's Covid-19 hard hit care homes" CAQ rejected a motion to regularize the status of asylum seekers, many of them working in CHSLDs, Quebec,s long-term healthcare homes. What this latter article doesn't say is that all 3 opposition parties supported the motion.

It is sad that the National Observer is belatedly covering Quebec with Canadian Press articles. The story that Greater Montreal is Canada's Covid-19 epicentre has been largely missed. That is, 55% of the Covid-19 cases and 60% of the deaths in Canada are in Quebec, primarily in the Greater Montreal area.