Canadian snowpack gets thinner every decade 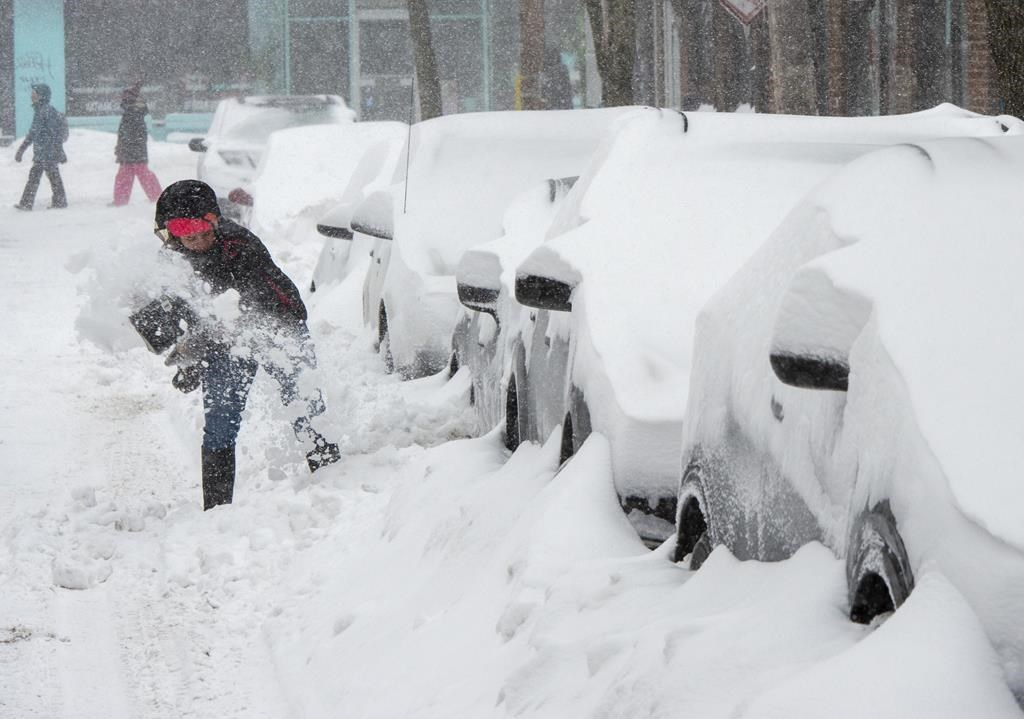 A woman shovels out her car during a snowstorm, on Friday, February 7, 2020 in Montreal. It may not feel like it the morning after a blizzard, but Canada gets less snow than it used to. File photo by The Canadian Press/Ryan Remiorz
Previous story

It may not feel like it the morning after a blizzard, but Canada gets less snow than it used to — a lot less.

That's the conclusion of scientists at Environment Canada, who have just published what they say is the most precise estimate of global snowfall yet.

"It seems like it should be easy, right? You just stick a ruler in the snow," said Chris Derksen, a co-author of the study published Wednesday in the journal Nature.

Unlike rain, snow depth can vary widely over just a few metres depending on factors such as wind. As well, some snow is heavy with moisture and some is dry powder.

And the world's network for snow observation is sparse, Derksen said. Add to that the difficulty of trying to estimate snow depth from satellite observations and you've got the beginnings of what has been a 15-year project for Derksen's team.

"Snow is a tricky thing to measure," he said. "We had quite a few data sets that estimated snow mass, but they were based on different techniques and they didn't agree with each other very well."

On average, they conclude, the world gets about 3,000 billion tonnes of snow every year.

But that's not a static number, at least not in North America. Snowfall hasn't changed much over Eurasia since 1980, but it is declining in Canada and the United States.

Over the last 39 years, snowfall in the two countries has dropped by about 4.6 billion tonnes a year. The paper is silent on how many shovelfuls that is, but Derksen said it's about enough to fill almost two million Olympic-sized swimming pools with snowmelt.

The steepest drops are in the eastern part of the continent. Parts of the west have actually seen slight increases.

Derksen said regions with less snow aren't necessarily drying out. Climate change has been shortening the season for a while, and some of what used to fall as snow now comes down as rain.

"The amount of precipitation is not decreasing."

But snow is a lot easier to manage, he said.

"When (snow) melts, we can manage our reservoir levels and trap that meltwater. As soon as it rains, it runs off in streams."

That difference has important consequences for big-city water supplies as well as flood threat management. The 2013 Calgary flood is an example of what can happen when unexpected heavy rains come early in the season, said Derksen.

The paper does have its uncertainties. It is unable to say much about snowpack in the mountains, for example.

But Derksen said the work goes a long way to understanding that most Canadian of elements. And it should help managers plan as snowfall changes along with the rest of the climate.

"What this study has tried to do is narrow that uncertainty."

This report by The Canadian Press was first published May 20, 2020

This is not news to any

This is not news to any observant person living in Canada. I remember as a child tunnelling into a snow drift in the driveway with my brother. We couldn't do that anymore even if we still had the same-sized bodies we did then. It's sad that today's children will never know winter the way we did.

I told my kids about when I

I told my kids about when I was very young, when Dad would in the morning after a heavy snowfall shovel a path between the front door and the outhouse, and a particular time I remembered when the snow was above my head, and it was both unsettling and magical: the trees nearby and the housetop and garage were all there, but no field, no neighbours' houses ...
And then, one morning, my daughter reported to me that the snow on our front walk was above her head ...
And within the past couple of years, we've had cars literally buried under the snow.
Kids don't know winter the way we did partly because we don't see our adult winters with children's eyes.
But yeah, winter's changed a lot. Mainly that it's shorter. And the mini-seasons within it don't seem predictable by the old rules of horse-sense.

North American glaciers melting much faster than 10 years ago: study