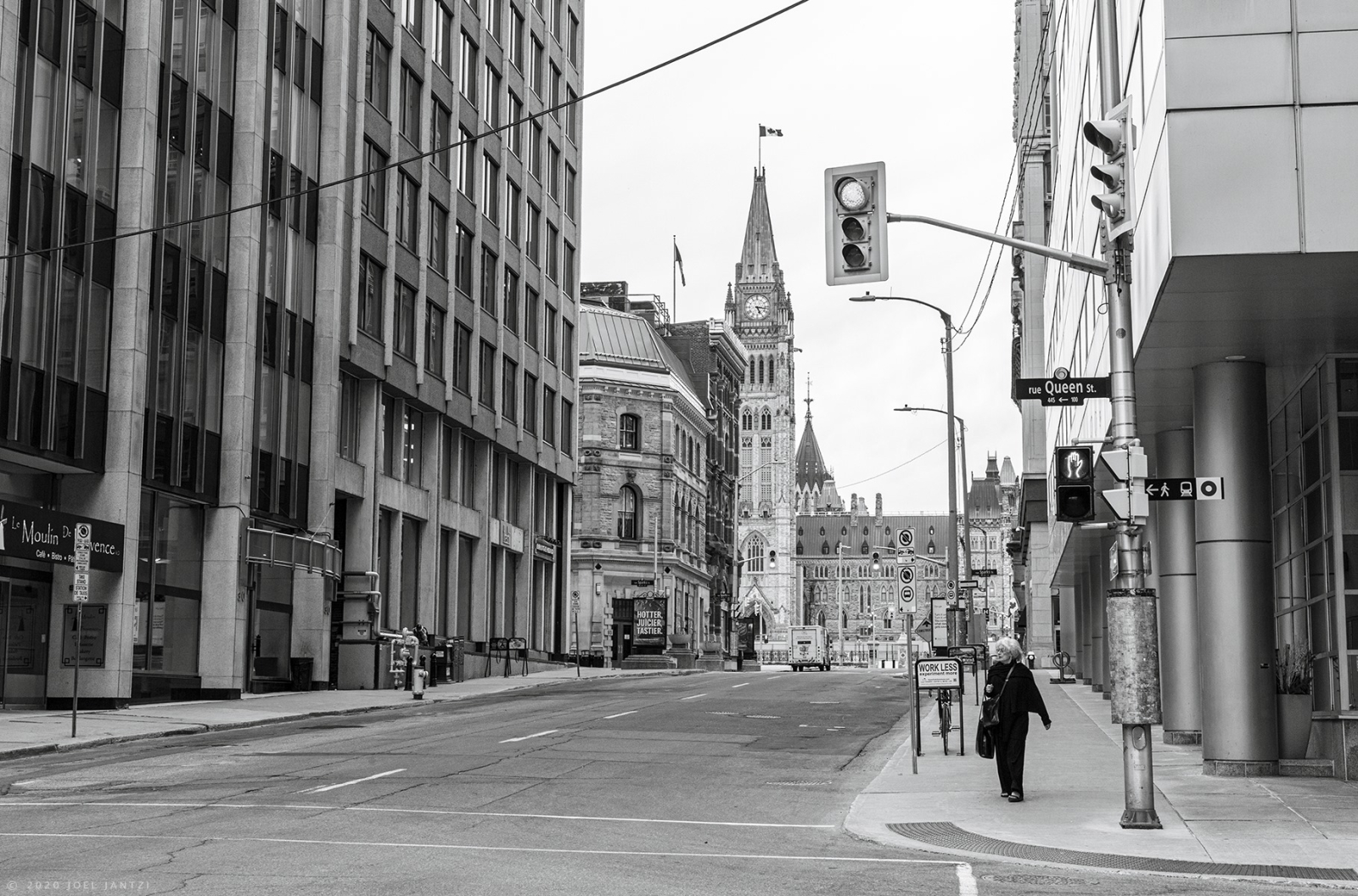 An empty street in downtown Ottawa on May 14, 2020 during the COVID-19 pandemic. Photo by Joel Jantzi
Previous story
Next story

A storm has let up over Delhi; one of toxic particulate matter previously shrouding the world’s most-polluted city. In fact, late March saw the clearest urban landscapes some of her residents have ever known, and farther north, those in the city of Jalandhar beheld the nearby Himalayas for the first time in decades.

Similarly, blue skies have appeared over Beijing, London and Los Angeles. Even in Canada, where shifts in air quality are less dramatic or photogenic, we appear to be breathing easier, and the accompanying racket of civilization has settled to a whisper, forcing many to wonder why we’ve been doing this to ourselves, and how many of these sensory delights we get to keep.

Daniel Rainham, an environmental epidemiologist with Dalhousie University, has worked with air quality and human health in one form or another since the early 1990s, and he said changes since the pandemic began have been noteworthy, if a touch difficult to interpret.

The Canadian Urban Environmental Health Research Consortium is a collection of epidemiologists and other exposure specialists tracking various forms of pollution in cities across the country.

Recently, two of its members, Ying Liu and Audrey Smargiassi of the University of Montreal, produced a GIF showing nitrogen dioxide (NO2) pollution change over North America using satellite imagery from March 1 to April 11. The GIF clearly demonstrates a dramatic decline, highlighting major cities such as Toronto, Montreal and Vancouver. But from Rainham, a caveat:

NO2 levels come with seasonal variability, he said, and while they have certainly dropped as a consequence of Canada’s quiescence, they were expected to drop around this time of year anyway. There are ways of determining how much of the decrease observed by Liu and Smargiassi is due to COVID-19 restrictions, but this would require more data than is now available.

Rainham lives in Halifax, the largest Canadian city east of Montreal, and has a PurpleAir sensor in his backyard. It’s a brand of air-quality monitor that feeds its findings onto an open-source website where data from PurpleAir sensors around the world can be observed. Among other things, this sensor measures the micrograms per cubic metre (µg/m3) of particulate matter at or below 2.5 microns in size (PM2.5). This is a size of particular interest to environmental epidemiologists.

Taking an average from Feb. 1 to March 16, which, for Eastern Canada, he considers pre-pandemic, Rainham’s PurpleAir sensor puts particulate matter at 6.2µg/m3, very good air for a major city. From March 16 to April 17, however, these levels dropped to 3.8µg/m3; better still.

“As a very rough estimate, it looks like it’s almost halved,” Rainham said, but here again, he applies caution. This is one sensor, and an imperfect sensor at that; not nearly as infallible as the air-quality monitors maintained by the Canadian government in most major cities, the raw and relevant data from which have yet to be made available to academics like Rainham. Also, he said, Halifax air pollution is a fraction of that in bigger cities such as Toronto, where swings in particulate matter are surely more dramatic.

"With 80 per cent of Canadians living in cities, and a widespread lull in traffic, it’s all but certain we are breathing notably cleaner air than this time last year, and perhaps many years prior."

All the same, the graphs produced by his backyard PurpleAir sensor clearly show a tempered line after mid-March.

“If you look at the world mortality data, air pollution would be in the top 10 in terms of environmental killers,” Rainham said.

Besides the usual culprits spewed from tailpipes and smokestacks, like carbon monoxide, nitrogen dioxide and sulfur dioxide, particulate matter takes centre stage in conversations about human health. Any particle smaller than 10 microns, especially those smaller than 2.5 microns, are so fine as to bypass our natural defences, such as the linings in our noses and at the backs of our throats, and protective mucuses and hairs. The smaller they are, the deeper they penetrate into our lungs, and the more clearly they are linked to things like pulmonary and cardiovascular disease, and other, less obvious, outcomes, such as diabetes and breast cancer.

Studies harnessing satellite data on particulate matter show a clear link between its concentration — particularly in the case of PM2.5 — and the concentration of illness and death associated with air pollution. Rainham has been involved in some of these studies himself, and said the impact on global health is sizable.

A GIF produced by Ying Liu and Audrey Smargiassi of the University of Montreal showing nitrogen dioxide (NO2) pollution change over North America using satellite imagery from March 1 to April 11, 2020.

“I’m not as involved with air-quality work as I used to be because, frankly, I’m not sure how much more evidence we need that it’s very bad,” he said.

While there are natural particulate matters, such as pollen and salt, these are dwarfed by industrial activity and, in particular, motor vehicles, expelling particles from their tailpipes or throwing them off with the grinding of brake pads or the wearing of their tires. Fossil fuel refinement and Canadian emission standards have improved our individual exhausts over these past few decades, Rainham said, but countering these gains is an increase in cars overall and the success of SUVs, which are themselves much less efficient.

With 80 per cent of Canadians living in cities, and a widespread lull in traffic, it’s all but certain we are breathing notably cleaner air than this time last year, and perhaps many years prior.

“Is this pandemic guidance for the future (of air quality)?” Rainham said. “Well, why not?”

He suggests major cities embrace streetscaping projects — as has happened on Argyle Street in Halifax, and is intended for the nearby Spring Garden Road — that prioritize cyclists and pedestrians, and cater less to the automobile. As well, businesses can encourage work from home, public transit can see increased investment and electric cars can corner the market. There are opportunities, he said, to maintain our present clarity.

The burden of noise pollution on Canadians, especially those living in major cities, is poorly understood. Exposure data prior to the 1970s simply doesn’t exist, and sporadic research since has not supplied any consistent trends. To answer this question of just how loud it has gotten over these past few decades, we are left with common sense.

“Traffic is the most important source of noise pollution, traffic is intensifying and population density and car ownership is increasing, so it’s a pretty safe assumption that noise levels have increased in places like Toronto and other metropolitan areas,” said Tor Oiamo, assistant professor at Ontario’s Ryerson University and a member of its exposure science and environmental health research group. His work focuses on the monitoring and modelling of noise pollution, and how it relates to human health.

“At this point, the weight of the evidence is quite strong,” he said.

The clearest correlations in the literature so far exist between traffic noise and things like high blood pressure, ischemic and coronary heart disease and diabetes. These aren’t direct results, mind you, but instead the byproducts of chronic stress and sleep loss due to noise pollution, and they affect everyone differently.

As Oiamo explains it, 55 decibels during the day and 45 decibels at night are considered the points at which noise pollution begins to consciously annoy people, and when negative health effects begin to accumulate, but it would be meaningless to say any city exceeds these thresholds. You could find a spot anywhere in Toronto exceeding 55 decibels, then turn a corner and fall below. The best evaluation of a city’s noisiness, he said, is to gauge the percentage of its residents who are routinely exposed to dangerous decibels.

“More than 90 per cent of people in Toronto are exposed to noise levels exceeding World Health Organization recommendations for nighttime levels, which is 45 decibels,” Oiamo said. For daytime exposures exceeding 55 decibels, that drops to just over 60 per cent.

“In Toronto, an overwhelming majority of people are exposed to noise levels considered harmful.”

Except right now, of course. While most major cities in Canada have permanent air-quality monitoring stations, very few have the capacity to track noise pollution in real time, so Oiamo cannot be sure precisely how quiet things have gotten. He knows, however, that traffic alone is responsible for roughly 50 to 60 per cent of urban noise pollution, and that other sources, such as construction and entertainment infrastructure, have likewise dissipated dramatically in recent months as a consequence of COVID-19.

“Everyone going outside in Toronto has noticed that it’s considerably less noisy now,” he said.

Exactly how this quiescence of major cities across the country will impact human health is a difficult question to answer, but Oiamo said hundreds of lives could be saved by this silence, and thousands more will be “quality-adjusted” in Toronto alone. This is not a silver lining, he said; there are no silver linings in a pandemic, but this should serve as a point of reference the next time any province considers managing its noise pollution.

“We know it’s harmful to our health, so it’s about communicating that it’s not the policy priority in Toronto and Canada that it could be,” Oiamo said. “If anything, now that people have been exposed to less noise, there’s perhaps more of an appreciation for silence, and maybe there will be more value put on it.

“Maybe the next time we bring some documents to the province, to recommend actual, enforceable standards be set, they’ll think back and remember what things were like when it was a bit quieter. The way these things move from data and science into policy and action are meandering and complicated, but I think this might be a bit of an eye-opener.”

By Zack Metcalfe | Opinion | May 7th 2020
Coronavirus in Canada