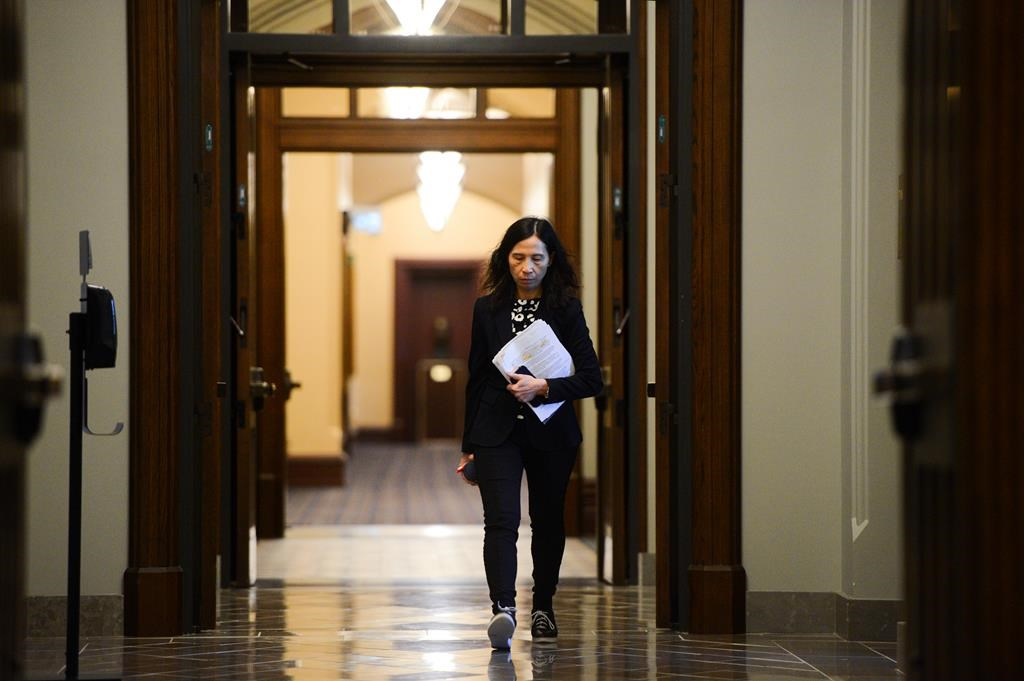 Dr. Theresa Tam, Canada's Chief Public Health Officer, arrives to take part in a press conference on Parliament Hill during the COVID-19 pandemic in Ottawa on Wednesday, May 20, 2020. Photo by The Canadian Press/Sean Kilpatrick
Previous story

Difficulties gathering federal data on the spread of COVID-19 has hampered Canada's response to the pandemic, experts told Members of Parliament over several hours of scathing testimony Wednesday.

The criticism of Canada's method of gathering crucial information about the number of cases came from several witnesses at the House of Commons health committee.

Canada has struggled to get real-time epidemiological information about how many people have the disease, who they are and what kinds of people are affected the most.

The problem is not new, said University of Toronto epidemiologist David Fisman, who has for a long time found the lack of data-sharing among provinces in Canada astounding.

"I’ve called it a culture of 'data hugging' in Canada, and it does need to change. It harms us all," he told the committee.

His team has become accustomed to dealing with data other countries might consider garbage, and they have dubbed themselves "data raccoons."

The problem is that data is gathered by local jurisdictions, where it's then communicated to provincial health authorities which finally send it on to the Public Health Agency of Canada. Often, the information is collected in paper records and faxed up the chain.

But it doesn't have to be that way, said University of Ottawa law professor Amir Attaran, who specializes in public health.

"I believe our most fundamental failing is that pandemic responses are handicapped by a mythological, schismatic, view of federalism," he said.

"When provinces withhold epidemiological data, or do a horrid job of testing, collectively we grumble, shrug, and mutter that 'health is provincial'. But this is actually wrong."

He said the federal cabinet could compel provinces to share their information, but it hasn't.

He compared the situation to a map of a minefield the entire country must travel through, with each province holding a small piece.

"I think you’d probably want to know a map of the entire minefield, not just your little patch of it, if you were setting out on a journey," he said.

A report by the National Advisory Committee on SARS and Public Health warned about Canada's poor data collection and sharing in the wake of the 2003 outbreak in Ontario.

There was an attempt several years ago to create a better data-sharing program between provinces and the federal government, but it didn't work, Attaran said. He told the committee it was developed by IBM, the same company responsible for the Phoenix pay system that has proven a nightmare for federal public servants.

The experts agreed Canada's ability to collect timely and accessible information about the pandemic has been a failure.

At an earlier briefing Wednesday, chief public health officer Dr. Theresa Tam said the most important thing is that local jurisdictions have the data they need to respond to outbreaks. But she acknowledged there are deficiencies in getting that information at the federal level.

"It is important to get the national picture and to be able to provide that to policy makers as well. We have the basic information, but what people need and are asking for now is more what we call disaggregation, more in depth analysis," she said.

"If you're fine-tuning your policies to support vulnerable populations that’s important."

She said the issue is on the radar of Canada's premiers.

This report by The Canadian Press was first published May 20, 2020.