Movies to stream: Comedy (Military Wives and The Lovebirds) and history (how Chretien kept us out of Iraq) 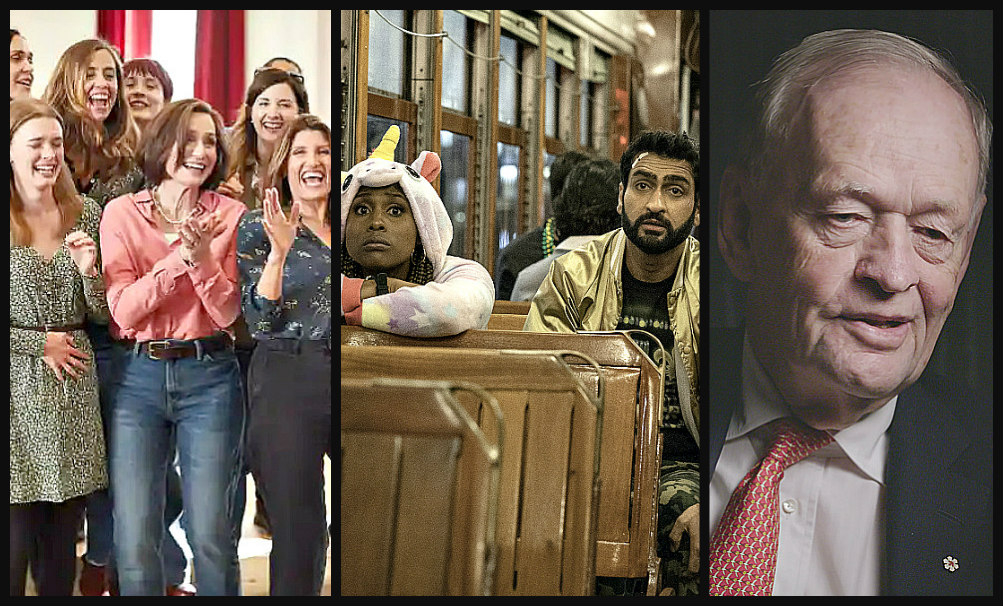 Another studio has its movies streaming. Paramount is the latest this week with Body Cam, starring Mary J. Blige and Nat Wolff, and with The Lovebirds (see below). Some big older titles are now up, too, like Joker and Rocketman, as well as this rich selection of smaller new films.

The Painter and the Thief: 4

The Trip to Greece: 3

MILITARY WIVES: Fans of British comedy will relish this one for the faceoff-cum-accommodation enacted by Kristin Scott Thomas and Sharon Horgan. And anybody will appreciate what it shows about how women work together. Or just as often, not work together. It’s a weighty subtext to a film that at first glance looks like a very light charmer about a group of women who start a choir. It is that, but in showing two leaders with completely different methods and the clashing that produces, it adds a thoughtful extra. Thomas is by the book; she even has one about how to organize a choir. Horgan likes to jump into Cyndi Lauper and Human League tunes and have fun.

The story is close to real, based on a series of choirs that have sprung up on British military bases for the wives to fill their time while their husbands are away. In Afghanistan, in this case. They try knitting and other womanly hobbies and settle on singing, which goes badly at first, but then gets a deadline. The not-yet-in-tune choir is booked for a Remembrance ceremony at Royal Albert Hall. The two leaders have little time to get them singing right and annoy each other with their disparate methods. Can they make up before the big concert? Come to think of it, will any of the women get bad news about their men? Will the best singer agree to a solo? Do you have to ask? The plot follows a familiar trajectory. This one is much like, but milder, than The Full Monty, which the same director, Peter Cattaneo, made 20-plus years ago. It’s a good companion piece and just as enjoyable. (Video on demand.) 3½ out of 5

THE LOVEBIRDS: It makes little sense, but you’ll be entertained anyway, and that may be enough these days. The fun is in the interplay between the two lovers (Issa Rae and Kumail Nanjiani) who four years after a one-night stand are still together, but bickering incessantly. In one scene, he calls her “shallow” and she decries that he’s “satisfied with being a failure.” They play out lively echoes of such exchanges at various times, but despite the title, that’s not even the film’s focus. The real plot starts when they hit a cyclist with their car, are commandeered by a man claiming to be a cop, who then chases the cyclist and runs over him again and kills him. Our lovers are sure to be accused of murder unless they can solve the case themselves. Problem: They have no information to go on.

As improbable as that sounds, and through a couple of strange costume changes, they do get there. They break into an apartment where frat boys assemble photo packages for blackmail, are captured by a woman who offers a choice of tortures, and watch a sex-cult ceremony reminiscent of Eyes Wide Shut. They have to fight to stay alive or, at the least, undetected. It gets silly, but keeps you interested and the two leads are able to make the dialogue amusing, if not outright funny. Nanjiani last worked with the same director, Michael Showalter, in The Big Sick. Compared to that, this is lightweight stuff. (New today on Netflix.) 2½ out of 5

HIGH WIRE: New this week among the documentaries the National Film Board is streaming for free is this potent history lesson that will make you proud again to be a Canadian. It tells in detail how we avoided going to war 17 years ago when George Bush (the younger) decided to invade Iraq. These days, we know how appalling a move that was, but back then, there were arguments about weapons of mass destruction and standing by a friend. Jean Chretien cut through that with a 45-second announcement in Parliament: We won’t go. The film by Claude Guilmain, his seventh for the NFB, gives all the background through new interviews with Chretien, two of his main advisers, and others.

Paul Heinbecker, who was our man at the United Nations at the time, gives a lot of inside information about how the Americans leaned on Canada to join in and tried to manipulate other delegations there. The film traces the U.S.'s adventures in the Middle East back to when they ousted the leader of Iran and installed the Shah and then through a succession of wars that they endorsed, participated in or allowed. They got 9-11 in return and had to hit back somewhere. Journalist Chantal Hébert says Quebecers saw it as just another “Anglo-Saxon war” that they wanted no part of. Chretien points to the sheer incompetence of it, saying it led to ISIS and helped fire up the civil war in Syria. Strong stuff. A must-see. (https://www.nfb.ca/ ) 4½ out of 5

THE PAINTER AND THE THIEF: Here’s the strangest movie of the week (maybe much longer) and the most inspiring. To forgive is divine, they say. Not often does it happen like this. The fact that it’s true is all the more impressive. It’s a documentary showing the real people involved in an incident and its aftermath and surely provoking the question: How did they have the camera there for all those scenes?

Barbora Kysilkova, a Czech painter recently relocated to Norway, gets the distressing news that two of her pictures had been stolen from a gallery. Director Benjamin Ree followed her for three years and shows in detail what she did about it. Security footage identified one of the thieves, Karl Bertil-Nordland. She approached him at his trial and to befriend him, offered to paint his portrait. While doing so, she got to know him. The film tells his story first and then hers.

His parents divorced and he was raised by a father who was often away. He became a junkie, spent several stretches in jail and can’t remember why he (and an associate) stole the paintings or what happened to them. “I was so wasted,” he says. But he was genuinely moved by the portrait she painted. He actually whimpers saying that. She tells him that she lived in Berlin, escaped a violent relationship and is on a quest to get her self-respect back. What could these two have in common? You’ll be asking that as their friendship grows. She’s attracted to “something that is destructive,” her boyfriend argues. There’s more about their unlikely connection, in this fascinating and absorbing film. Also, eventually, a recognition that some crimes are simply banal and without purpose. (Available now on video on demand platforms.) 4 out of 5

THE TRIP TO GREECE: Rob Brydon and Steve Coogan have taken four of these trips for British television, sampling the dining fare and local sights of Yorkshire and then the continent and mostly one-upping each other doing impressions. They say this is to be the last, and while it’s been fun, and still is, I can see they’re running out of material. We’ve heard them do Michael Caine, Sean Connery and Mick Jagger before, and they’re mostly just repeating. There are tasty bits, though, like Brydon’s enthusiastic and mock praise for a rather dull story Coogan tells. The series has always featured a genial competition between the two, and it works again.

They’re in Turkey and then Greece this time, following the route that Odysseus took on his way home from the Trojan War. So, of course, we get banter and mild showing off of historical and cultural knowledge mixed in with observations about Midnight Cowboy and Godzilla. Oddly, though, not as much as I would have expected of actually taking in the local sights along the way. They’re self-contained, involved with the meals they eat along the way or communications with their family. There’s a poignant ending this time; Coogan hears that his father has died. Director Michael Winterbottom justifies including that even though it happened the year before. Inappropriate? It does remind me that the two men are essentially playing fictional versions of themselves. A strange realization with which to end this agreeable series. (Available now “across all digital and on-demand platforms.”) 3 out of 5

LUCKY GRANDMA: An almost mythological depiction of an old Chinatown is what will draw you to this small film. That, plus the engaging performance by the veteran actor playing the lead. Tsai Chin is best known for playing the auntie in The Joy Luck Club, but her resume is long. She was even a Bond girl in a 1967 film. Here she’s a cranky grandmother in New York who, alerted by a fortune teller to “a momentous change,” joins a bus tour to a casino where she wins big and then loses just as big.

On the ride home, she picks up a bag of money abandoned by a man who dies of a sudden heart attack, and “momentous” turns into dangerous. The money belongs to a Chinese gang; they want it back and two thugs threaten her. She goes to a rival gang to hire a bodyguard and gets a simple giant named Big Pong. The contrast in their height is enough to spin comedy. His mild nature compared to her ornery side adds to it. Familiar Chinatown elements provide the flavour: curio shops, restaurant kitchens, a dragonlady gang leader (“it’s bad luck to cross her”), talk of feng shui and traditional medicine. The plot is thin and breezy, like in some of the films that come now and then from China. Sasie Sealy, the director and co-writer, grew up with those films and tried to match their ambience. She’s succeeded. (Streaming at https://viff.org ) 3½ out of 5

SCOOB!: Huckleberry Hound and Yogi Bear came earlier, but Scooby-Doo has lasted longer. His streaming debut last week in his new movie was apparently a success, though I haven’t seen any actual numbers. I suspect, though, a lot of parents who watched him years ago showed him to their kids. He’s good, safe entertainment in a lockdown even with some significant changes.

Number one: How the dog and his human friends came together and formed their Mystery Inc. Shaggy (voiced by Will Forte) befriends a stray dog, names him after a package of snacks and later meets future pals: self-assured Fred (Zac Efron), smart Velma (Gina Rodriguez) and bold Daphne (Amanda Seyfried). Later, with help from Simon Cowell (yes, him) they go pro as supernatural investigators. They usually expose the ghostly as something evil, but human. That’s the standard plot in the TV series; here, they have to fight a super villain intent on harming the world (just like in all those superhero movies). It changes the mood immensely and other Hanna-Barbera characters show up, including Dynomutt, Blue Falcon and Captain Caveman, all voiced by known actors. Looks like franchise universe-building to me. Luckily, the film survives. It’s mid-level, but watchable for nostalgia buffs and with the kids. (Available on VOD platforms like Cineplex.com.) 3 out of 5