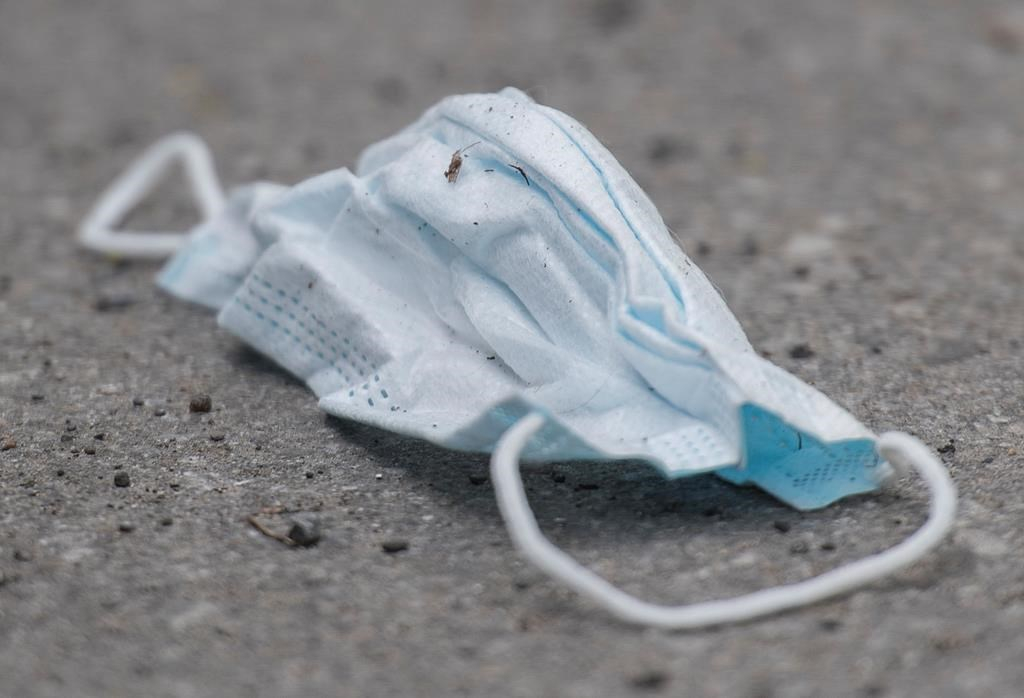 A discarded face mask is shown on a street next to a mobile COVID-19 testing clinic in Montreal, on Sunday, May 17, 2020, as the COVID-19 pandemic continues in Canada and around the world. File photo by The Canadian Press/Graham Hughes
Previous story
Next story

"We have delays in accessing PPE," said Tara Campbell, executive director of the Northern Inter-Tribal Health Authority in Saskatchewan.

"On-reserve populations' PPE in Saskatchewan are distributed by the province and unfulfilled requests are then forward to the national emergency stockpile."

She also said medical supplies such as thermometers and testing supplies are not readily available and that nursing capacity "remains a critical issue."

Campbell noted the key role that testing played in addressing an outbreak in the northern Saskatchewan community of La Loche earlier this month, where extensive door-to-door and mobile testing was done to identify and stop the spread of the virus.

"By being able to test and get results sooner, we were able to isolate individuals to make sure that transmission was minimal," she said.

"We aren't able to do this in every community because testing supplies are limited."

Chief Charlene Belleau, chair of the First Nations Health Council of B.C., said access to PPE has also been a concern for First Nations across her province.

"We also recognize the limitations across the country, but we are constantly advocating for PPE not only for our health care providers but also for our people that are providing security on the lines or at band offices," she told the committee.

The federal government has said it has been delivering large amounts of protective equipment to Indigenous communities to ensure they are able to protect their citizens and front line workers against the novel coronavirus.

On Friday, Indigenous Services Canada tweeted that as of May 22, it had shipped 845 orders of PPE to First Nations communities and had one order in progress.

But Conservative MP Bob Zimmer, who is the party's Northern affairs critic, says the accounts coming from First Nations chiefs and advocates at committee over the last few weeks indicate more of these critical supplies are needed in many Indigenous communities.

"It's a federal responsibility to provide PPE to the Indigenous communities and it was supposed to be established that way. We're hearing of shortages across the board, across Canada," Zimmer said Friday.

Richard Jock, interim chief executive officer of British Columbia's First Nations Health Authority, said his agency has developed a system to distribute PPE to its communities and regions to ensure there is a few weeks' supply to try to prevent critical shortages.

But supplies are low.

"I would not want to say that there's a stockpile or an accumulated surplus," he said.

Bellau also noted a rising dispute in B.C. about what level of government — federal, provincial or Indigenous — should pay the increased costs being incurred by First Nations that have hired security personnel to block or limit access to their communities to prevent outbreaks COVID-19.

"(Indigenous Services Canada) cannot rely on First Nations utilizing our own resource revenue as a means of protecting our communities," she said.