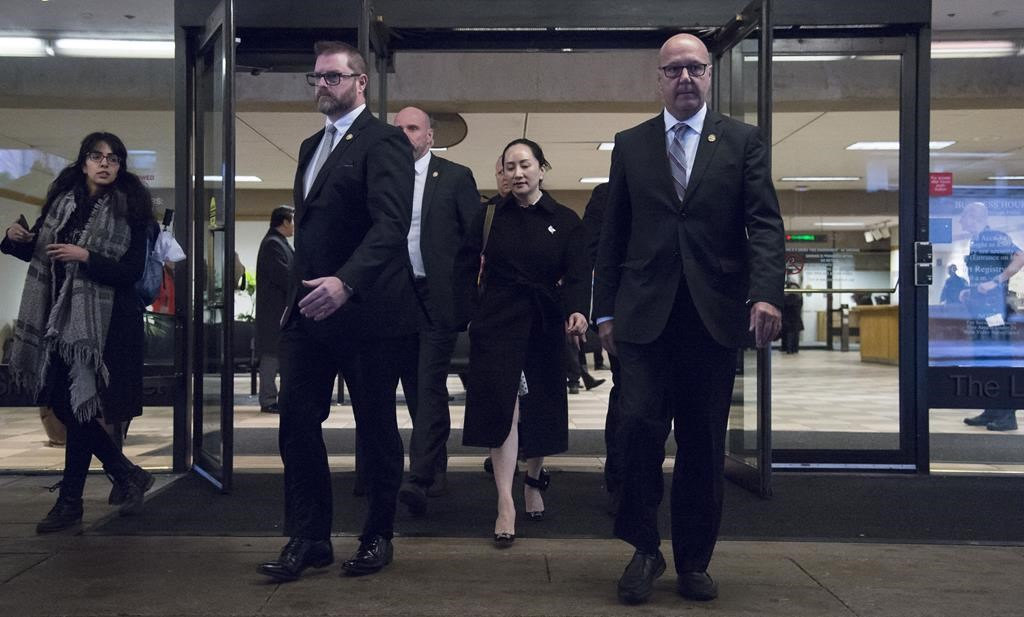 In a ruling issued Wednesday, Associate Chief Justice Heather Holmes said a key requirement for extradition was “capable of being met in this case,” and on that basis, dismissed Meng's request to be discharged from the process.

The 23-page ruling avoids the larger question of the Crown’s allegations of fraud connected with the Chinese tech giant executive. Holmes said she would “make no determination” whether there was admissible evidence that would justify Meng's committal for trial in Canada on fraud charges.

Meng’s legal team is now expected to appear back in court next month to discuss next steps.

The ruling allows the extradition process to the United States to continue, a situation that will surely increase the pressure surrounding China's ongoing detention of Canadians and an upcoming critical decision by Canada over whether to permit Huawei technology in 5G wireless networks.

China's foreign ministry spokesperson Zhao Lijian said previously that Canada should "correct its mistake" and "release Meng and ensure her safe return to China at an early date" in order to "avoid any continuous harm to China-Canada relations."

Meanwhile, the Trump administration continues to single out Huawei, restricting its ability to use American software or technology this month under a U.S. Department of Commerce order. The U.S. president has reportedly been pushing allies to block Huawei from 5G networks.

"Huawei is an untrustworthy vendor and a tool of the Chinese Communist Party, beholden to its orders," U.S. Secretary of State Mike Pompeo said May 15. Huawei strongly denies such accusations.

Read my statement on the Supreme Court of British Columbia decision on double criminality in the extradition process for Meng Wanzhou. pic.twitter.com/pwRglXPvzF

One of many steps in legal process, minister notes

Canadian police arrested Meng on Dec. 1, 2018 at Vancouver International Airport, acting on a U.S. arrest warrant. She has been under house arrest for 18 months.

That same month, Canadians Michael Kovrig and Michael Spavor were arrested in China and have been detained since then, now over 500 days.

China denies their arrests were connected to Meng and has also alleged that Kovrig stole state secrets.

On Wednesday, reacting to the ruling, Foreign Affairs Minister François-Philippe Champagne said Canada will "continue to pursue principled engagement with China to address our bilateral differences and to co-operate in areas of mutual interest."

Champagne's statement described the ruling as an "independent decision" that is "one component in a multi-step legal process." He said Canada's "top priority" is securing the release of Kovrig and Spavor, who he said have been "arbitrarily detained."

Canada will continue to advocate for their immediate release, said Champagne, as well as seek clemency for Robert Schellenberg, another Canadian who is facing the death penalty.

The Crown's strategy in the Meng case focused on accusations of bank fraud. According to the ruling, prosecutors alleged Meng "significantly understated" Huawei's connection to a company called Skycom Tech. Co. Ltd., based in Iran, during an August 2013 meeting with multinational bank HSBC.

Prosecutors have called Skycom an “unofficial subsidiary” of Huawei, and have said the Chinese tech giant was trying to evade U.S. sanctions by using Skycom to conduct business with Iran.

Meng was accused of making "false assurances" to HSBC about Skycom that would put the bank at risk of violating those sanctions and expose it to "economic and reputational risk."

Meng had countered that her conduct couldn't be considered fraud because the proposed prosecution was to enforce U.S. sanctions that are not part of Canadian law.

Her lawyers criticized the framing of the case as turning on the question of bank fraud, saying that the U.S. would have no interest in policing the dealings of a foreign bank and a private citizen.

If Canada extradites for conduct that doesn't violate its own laws, it will "run counter to the rule of law and the principles of fundamental justice," they said, according to the ruling's summary.

But Holmes said that while the U.S. sanctions were indeed part of the "state of affairs" necessary to explain how HSBC would have been put at risk, "they are not themselves an intrinsic part of the conduct."

To allow that, she said, would limit Canada's ability to fulfil its "international obligations" to combat fraud or other financial crimes.

"Experience shows that many fraudsters benefit in particular from international dealings through which they can obscure their identity and the location of their fraudulent gains," wrote Holmes.

This process has, and will,

This process has, and will, take far too long. This is unfair to Meng Wanzhou, who faces many years of limited freedom. For this reason she should be allowed to be free on bail while agreeing to return to court when ordered.