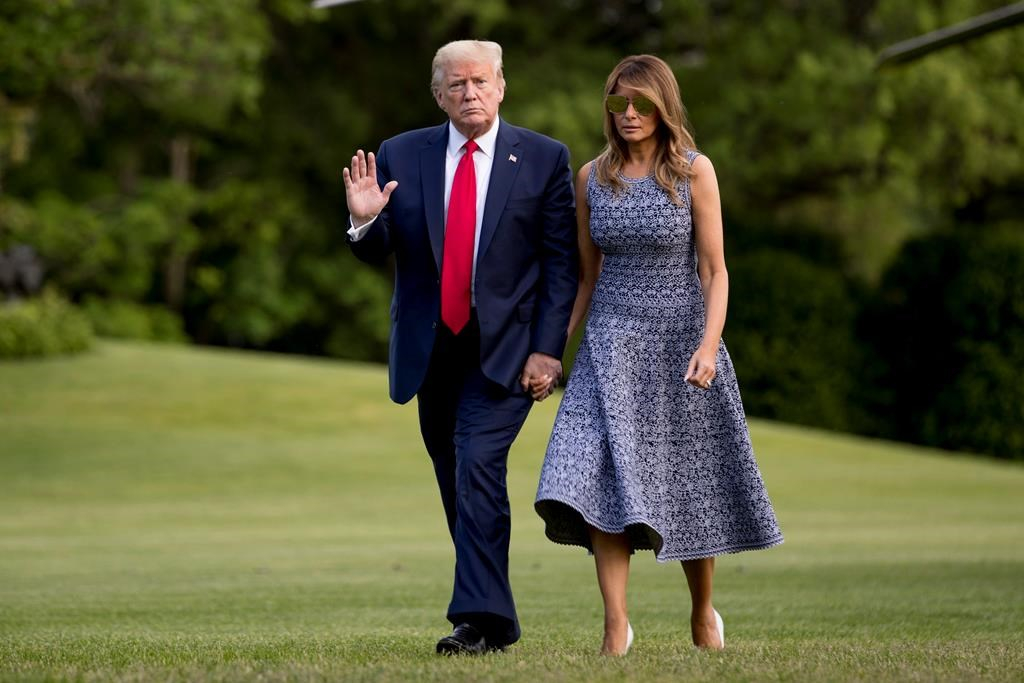 President Donald Trump and first lady Melania Trump return to the White House in Washington, on Wednesday, May 27, 2020. File photo by The Associated Press/Andrew Harnik
Previous story
Next story

Donald Trump launched a Twitter war of a different sort Thursday, picking a fight with the online platforms that helped to shape his political career — a feud that, should it escalate, could curtail free speech in the United States and even run afoul of North America's new trade pact.

Angered by Twitter's decision to place fact-check flags on two of his recent tweets, Trump signed an executive order Thursday authorizing a review of Section 230 of the U.S. Communications Decency Act, a cornerstone of the modern-day internet that protects online platforms from being held liable for third-party content on their sites.

"Currently, social media giants like Twitter receive an unprecedented liability shield based on the theory that they're a neutral platform, which they're not," Trump said in the Oval Office, with Attorney General Bill Barr standing at his side.

The order, he said, calls for new regulations that would strip that protection from any social media outlets "that engage in censoring or any political conduct."

While the move is being billed by the White House as a full-throated defence of America's precious constitutional right to free expression, and dismissed by others as posturing, experts say changes to the law would encourage companies like Twitter, Google and Facebook to simply hit delete rather than defend the rights of those who post contentious statements online.

"Countries that do not have these kinds of provisions find that platforms will often err on the side of removing content," said Michael Geist, a law professor at the University of Ottawa who specializes in online and e-commerce issues.

"That would probably be, at the end of the day, the crucial takeaway here: this is framed as being measures designed to help safeguard free speech, and yet limiting some of these kinds of protections would have the effect of doing the opposite."

Section 230, credited by many as the foundation on which Big Tech is built, has been the subject of heated debate on Capitol Hill in recent years as the 20-year-old vision of the internet as a self-policing free-speech utopia has been sullied by the seedier corners of cyberspace, where hate speech, misogyny and disinformation campaigns flourish.

But congressional concerns about the law depend on which side of the aisle they're coming from: while Democrats take issue with content that foments hatred and falsehoods, Republicans complain about efforts to moderate content that they say end up suppressing conservative viewpoints.

That's what Trump contends Twitter was doing when a pair of tweets he sent Tuesday claiming mail-in ballots are vulnerable to election fraud were tagged with links urging followers to "get the facts about mail-in ballots." The links led readers to a brief note that called the claims "unsubstantiated," citing reports by CNN and the Washington Post — two of the president's most loathed media outlets.

The Communications Decency Act isn't the only place where the text of Section 230 appears. It also happens to be part of the digital chapter of the U.S.-Mexico-Canada Agreement, where it was included to ensure that the protection it provides technology companies in the U.S. is applicable right across North America.

"The extent to which the United States decided that it was going to create new levels of liability for these platforms, counter to or in conflict with what's found in Section 230 — that might run afoul of their new obligations under the USMCA," Geist said.

Dan Ujczo, a lawyer who specializes in Canada-U.S. trade, said while that's true on paper, the agreement is designed to be a "living document" that its myriad committees, interagency groups and enforcement bodies will be policing carefully during the early stages to ensure any conflicts or contradictions can be navigated.

And as always, it's an open question whether Trump will make good on his threat in the first place, he added.

"These are warning shots and teeing up some kind of negotiation that will happen," Ujczo said. "I don't see this as anything that will have a practical effect in the short term."

Steve DelBianco, president of NetChoice, a D.C.-based trade association that lobbies Congress on behalf of the technology industry, said while Trump's intent is to protect freedom of expression on the internet, he's going about it the wrong way.

"It's the wrong vehicle in the right direction," DelBianco said.

"Social media has been a godsend for average people, average Canadians, who want to share their news and views without a big traditional-media filter. For that reason, the limited liability that's in the USMCA makes sense for Canada, no matter what President Trump may do here in the United States to work over social-media platforms that he feels are not treating him fairly."

"I just believe strongly that Facebook shouldn't be the arbiter of truth of everything that people say online. Private companies, especially these platform companies, shouldn't be in the position of doing that."

Twitter CEO Jack Dorsey used his own platform to push back against Zuckerberg.

"We'll continue to point out incorrect or disputed information about elections globally," Dorsey tweeted. "Our intention is to connect the dots of conflicting statements and show the information in dispute so people can judge for themselves."

The article provides a look

The article provides a look into Section 230. A discussion I watched on you tube this morning covered an open discussion on this subject. The issue raised dealt with the words "Publishers and Platforms". The suggestion is "Platforms are not subject to lawsuits whereas Publishers are and are held responsible for their actions. In short the comments where if Platforms elect to critique the content there is no recourse against them, no need to check the source out verify same and therein lies the problem. If twitter or facebook employee's want to start policing the content they need to be held to the same level of responsibility as Publishers.