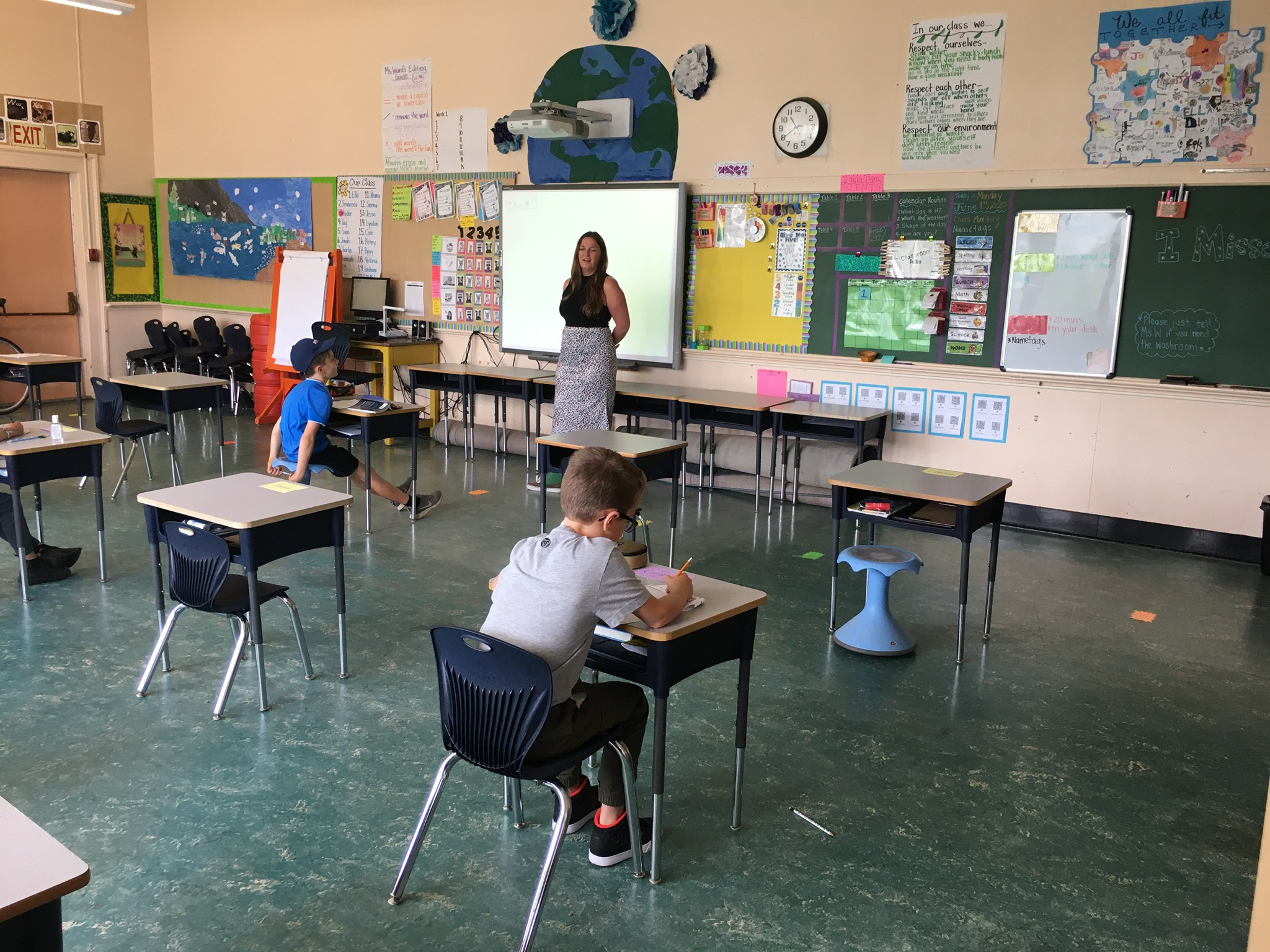 A photo posted by the Vancouver School Board shows physical distancing and low-capacity measures in place. VSB Facebook photo
Previous story
Next story

About one-third of children in the kindergarten to Grade 5 age group returned to classrooms in British Columbia on Monday, according to the province’s top health official.

Parents in British Columbia have the option of sending their kids back to elementary schools part-time, as part of new re-opening measures that kicked in on June 1.

For the Vancouver School Board, families with kids enrolled in elementary schools should have already been given details on May 28 about their child’s schedule.

Only students whose families have filled out a form indicating they want their kids to attend in-person classes will be allowed into the building, the school board has indicated.

The board said Monday that General Brock Elementary School, a Kindergarten-to-Grade 7 public school on Main and 33rd Ave. in Vancouver, had 52 students for the day. The school usually has 245 students.

The provincial government, school districts and Dr. Bonnie Henry have all said schools are safe to attend, and many pandemic precautions are now in place across school districts.

“We are ready for this,” said Henry during Monday’s coronavirus briefing to reporters. “Our public health teams are ready to jump in, should we need to.”

Horgan: B.C. would not open schools if unsafe

Even so, some teachers have expressed apprehension about returning to classrooms, after 41 Quebec students and staff tested positive for COVID-19 following reopening measures in that province.

About one-third of children in the kindergarten to Grade 5 age group returned to classrooms in British Columbia on Monday, according to the province’s top health official.

A petition to B.C. Education Minister Rob Fleming asking the government to keep schools closed until September, for example, has gathered over 34,000 signatures as of Monday evening.

The petition by Patricia Cullen argues that young children can’t be counted on to follow sanitization protocols, or alert adults to the fact that they might be feeling some of the various COVID-19 symptoms.

And it takes issue with B.C. Premier John Horgan’s position that the re-opening of schools part-time will be “welcome news” for parents who have to go back to work, and kids who have found it hard to consume education online.

Horgan has said one reason behind the June re-opening was to do a “dry run” for teachers, support staff and administrators to “get a sense of what physical-distancing schools will look like.”

Each school district has different configurations for how they will operate, and Horgan said that will inform how the province prepares for next September’s back-to-school event.

“There’s apprehension, absolutely, among parents, among some teachers and among some support staff,” Horgan said May 20.

But, he said, the province would not be moving ahead if it didn’t feel it was safe.

It is the B.C. government’s position that science has shown that “children under 19 are at low risk of transmitting COVID-19 and suspending schools only has modest impacts in minimizing the spread of the virus,” according to the province’s website.

Henry has acknowledged that students and teachers are still at risk of becoming infected, however low that risk may be. She said she would “not be surprised” if B.C. had “one or two cases” in schools in the coming weeks.

"But that's okay. We know how to deal with this, we know that it is not easily spread, and we know we can prevent it by putting in place the measures that we have in our schools, and it's going to be a bit of a challenge,” said Henry.

She has also said that B.C., with its lower case count compared to Ontario or Quebec, is in a unique position. If B.C. was Quebec, in terms of case numbers, she said, she would not be comfortable sending kids back to school.

In a video message to teachers posted this weekend, Henry reassured them that school health officers, public health nurses and healthy school co-ordinators “are not going anywhere” along with the BC Centre for Disease Control and her own office.

Each school district has to get its safety plan approved and posted online. Those plans indicate how districts have applied the rules in their own contexts.

The education ministry says it is limiting the number of students in schools by staggering their schedules: for kindergarten to Grade 5, this could mean attending on alternating days, while for Grades 6 to 12, students are expected to go to school about once a week.

Gatherings and crowds are not allowed, while the ministry is requiring regular cleaning of high-contact surfaces like door knobs twice a day, cleaning the school building daily, and frequent handwashing and hand-sanitizing by everyone is encouraged. Schools should have “well-stocked supplies” of sanitizer and cleaning stations.

Other rules include spacing desks apart, scheduling lunch and recess differently, boosting outside time, forbidding sharing of items like pens or pencils, and limiting each seat on school buses to one household of children.

About 5,000 students are already in classrooms, many of whom are the children of essential service workers.