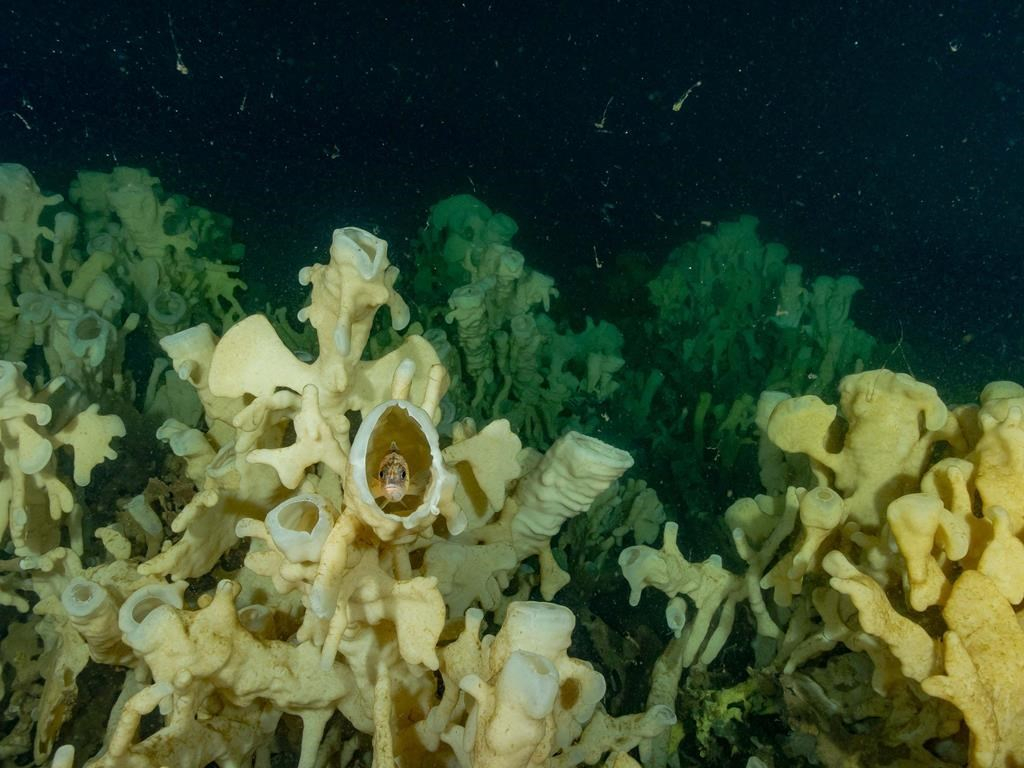 Warming ocean temperatures and acidification caused by climate change are threatening the survival of glass sponge reefs unique to the waters of the Pacific Northwest, a new study from researchers at the University of British Columbia has found.

The study's lead author Angela Stevenson likens the sponges to "living dinosaurs." They're made of silica, the compound that makes up sand and glass, and the creatures grow on top of the skeletons of previous generations.

"They're not the fish and the orca that we hear about all the time. They are animals that most of us will never see," said Stevenson, who did the study as a postdoctoral fellow at the university's department of zoology.

The glass sponge reefs play a crucial role in their ecosystem by feeding on tiny particles of organic matter.

The 19 known reefs in the Salish Sea between Vancouver Island and B.C.'s mainland can filter about 100 billion litres of water each day, removing 75 to 90 per cent of microbes, said Stevenson.

"It's a huge load that these sponges are taking on and we have to be able to protect them."

The results of the study, published in the journal Scientific Reports, show the effects of climate change on ocean waters could have serious impacts on the sponges, which haven't been found anywhere else except off the coasts of B.C. and Alaska.

Researchers found ocean acidification and warming, both alone and in combination, rapidly reduced the sponges' filtration capacity, which could starve the creatures.

The sponges also became weaker and more elastic, said Stevenson, meaning reefs could become brittle and collapse under the weight of newer generations of living sponges, which grow around seven centimetres a year.

Glass sponges are deep-dwelling creatures that don't like to be disturbed, said Stevenson, which means it's been difficult for scientists to study how they respond to environmental changes.

Warming ocean temperatures and acidification caused by climate change are threatening the survival of glass sponge reefs unique to the waters of the Pacific Northwest, a new study from researchers at the University of British Columbia has found.

By carefully managing their food intake and conditions in their aquariums, Stevenson was able to study sponges harvested from Howe Sound over the course of four months.

Chris Harley, a zoology professor and Stevenson's postdoctoral supervisor at UBC, says the sponges are "extremely hard to keep happy in the lab," and Stevenson is one of the first to figure out how to do it for more than just a few days or weeks.

Stevenson altered the water's temperature and acidity levels based on projections of future ocean conditions, though she said such temperatures have already been observed in the sponges' natural habitat.

In 2016, for example, she said the sponges were saved by a couple of cooler periods that allowed them to feed again.

"If it weren't for those brief cooler periods, we could have had several months of warming mirroring the experiments or the conditions I had in the lab, and then you would see irreversible damage."

The oldest known skeletal base of a glass sponge reef is around 9,000 years old, said Stevenson, and fossil records show different species of reef-building sponges dating back 40 million years.

Canadian geologists discovered the glass sponge reefs off the coast of B.C. while mapping the sea floor in the mid-1980s.

The reefs found in the outer Hecate Strait near Haida Gwaii cover around 500 square kilometres of the sea floor, but that's based on data from 2001 and more reefs are still being discovered, she said.

In order to give the sponges the best possible chance of survival in the face of ongoing climate change, Stevenson said it's important to reduce other pressures, including water pollution that can clog their filtration system.

In 2017, Fisheries and Oceans Canada established a 2,410-kilometre protected area around four glass sponge reefs in the Hecate Strait and Queen Charlotte Sound, but a subsequent study of fishing activity suggested that boundary be expanded.

Harley said the glass sponge reefs are an integral part of their coastal ecosystem, which includes species of the iconic killer whale that face pressures on their own survival in the Pacific Northwest.

"I would say that orcas and glass sponges are two canaries that share a coal mine," he said.

This report by The Canadian Press was first published June 2, 2020.