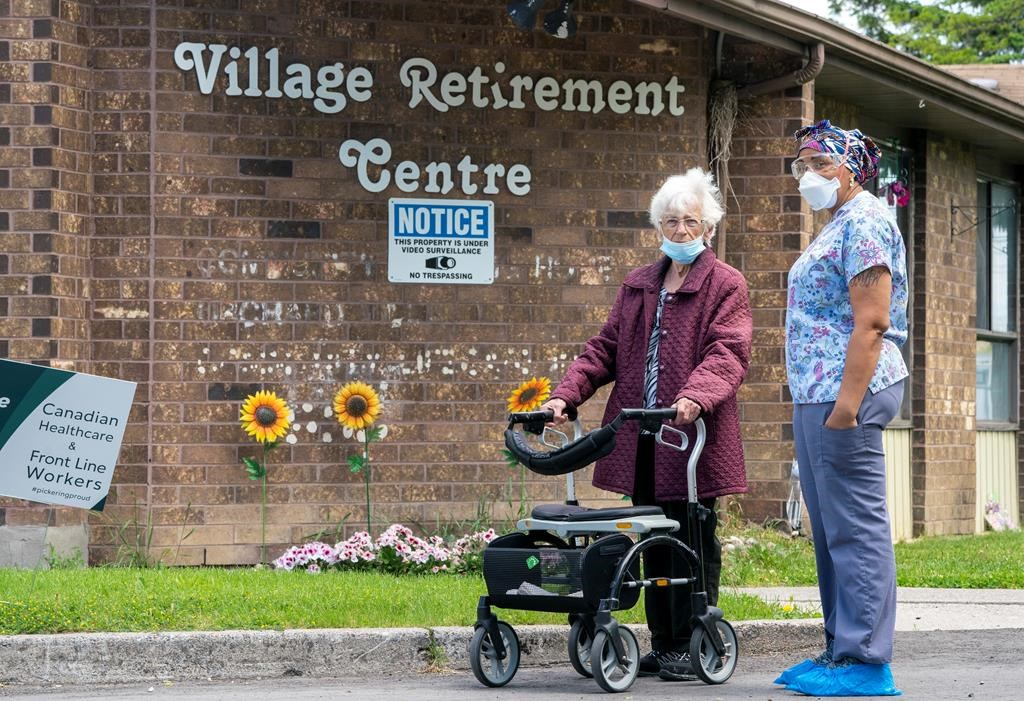 A resident and a worker watch as 150 nursing union members show support at rchard Villa Long-Term Care in Pickering, Ontario on Monday, June 1, 2020. Photo by The Canadian Press/Frank Gunn
Previous story
Next story

The federal government must do more to help provinces prepare long-term care homes for the next wave of COVID-19, the Ontario Long Term Care Association says.

"We need to act fast," she said, noting many experts think the second-wave of novel coronavirus infections will hit no later than September.

She is looking for an agreement along the lines of the 2017 deals signed between Ottawa and provincial governments to flow money for mental health and home care. Those agreements — more than $11 billion over a decade — required provinces to produce plans for how the funds would be allocated.

Duncan said she doesn't have a specific national dollar figure in mind but is looking for everything from money to hire more workers, to prioritizing the delivery of personal protective equipment and rapid on-site COVID-19 testing, as well as infrastructure funds that will help make some of the older, smaller homes better able to prevent infection and isolate patients when they become ill.

Last week, Trudeau said long-term care was on the agenda when he and premiers had their weekly COVID-19 conference call. He has not yet put any specifics on the table and has noted the provinces have jurisdiction.

"I said to the premiers, our government will be there to support them as we work together to ensure that our elders receive the care they deserve," Trudeau said Friday.

Duncan's organization represents about 70 per cent of the 626 long-term care homes in Ontario, but she said it is working with national and other provincial associations as well.

Long-term care homes have borne the brunt of the COVID-19 pandemic in Canada to date, with more than 4,000 residents dying in Ontario and Quebec alone. The Canadian Armed Forces deployed more than 1,000 members to care homes in Quebec and Ontario which were unable to look after patients with so many staff members sick.

Last week, the military reported serious problems in homes in both provinces.

The federal government must do more to help provinces prepare long-term care homes for the next wave of COVID-19, the Ontario Long Term Care Association says.

Quebec Premier Francois Legault is mulling over a full-scale overhaul of his province's system for caring for seniors in their final years, while Ontario Premier Doug Ford has promised an independent commission to investigate the failings of his province's care homes starting in July.

Duncan said the commission and investigations are welcome but the residents and the workers who care for them need something a whole lot faster than that.

"We're a bit concerned that everyone wants to be reflective now, as if this is over," she said. "It is not over. This is the beginning. Let's not become complacent. We have got to keep focused on keeping this out of our homes and protecting our seniors."

In Ontario, more than 5,000 care-home residents have been diagnosed with COVID-19, almost one-fifth of all the confirmed cases in the province to date. As of Tuesday, 1,465 residents had died of it, representing almost two-thirds of the province's total death count.

Another 1,825 long-term care home workers have been diagnosed with COVID-19 and seven have died.

There are still outbreaks at more than 1,000 facilities in Ontario, affecting at least 1,000 patients and more than 900 staff.

More than 2,000 long-term care residents have died in Quebec, and thousands more have been infected. A handful of care homes saw every single resident test positive for COVID-19.

More than 100 residents of long-term care homes in British Columbia have also died of COVID-19.

In Ontario, Duncan said long-term care homes where residents live in three- or four-patient rooms were the hardest hit by the outbreaks. Others that saw outbreaks use fans instead of air conditioning, which contributed to the spread of infected droplets, and have things like carpeting which is harder to keep clean.

She wants funds to fix some of those issues, including immediately preparing to reduce rooms to a maximum of two patients. However, in Ontario that will mean needing to find space for 10,000 beds.

The federal-provincial agreements should also look to the future, said Duncan, where an aging population is going to drive up the need for more long-term care homes. In Ontario alone, she said 100,000 new beds and 100,000 new workers will be needed over the next 15 years.

But the looming threat of another wave of infections is "what keeps me up at night," said Duncan.

She said the fear and stigma about working in long-term care homes is high right now, so an aggressive recruitment and skills-training initiative is going to be crucial, along with better pay for those workers. She believes two or three months is enough time to do some decent skill-building and recruitment drives.

Ottawa, which is helping provinces procure protective equipment like face masks, shields and medical gowns and gloves, needs to be sure to include long-term care homes on its priority list, she said. In the preparations for the first wave, hospitals were the focus for those things, and care-home workers were left short.

Duncan said there are solutions, but it is going to take resolve and creativity to put them into action.

"We're all going to have to problem solve together and try to figure this out," she said.

This report by The Canadian Press was first published June 3, 2020.