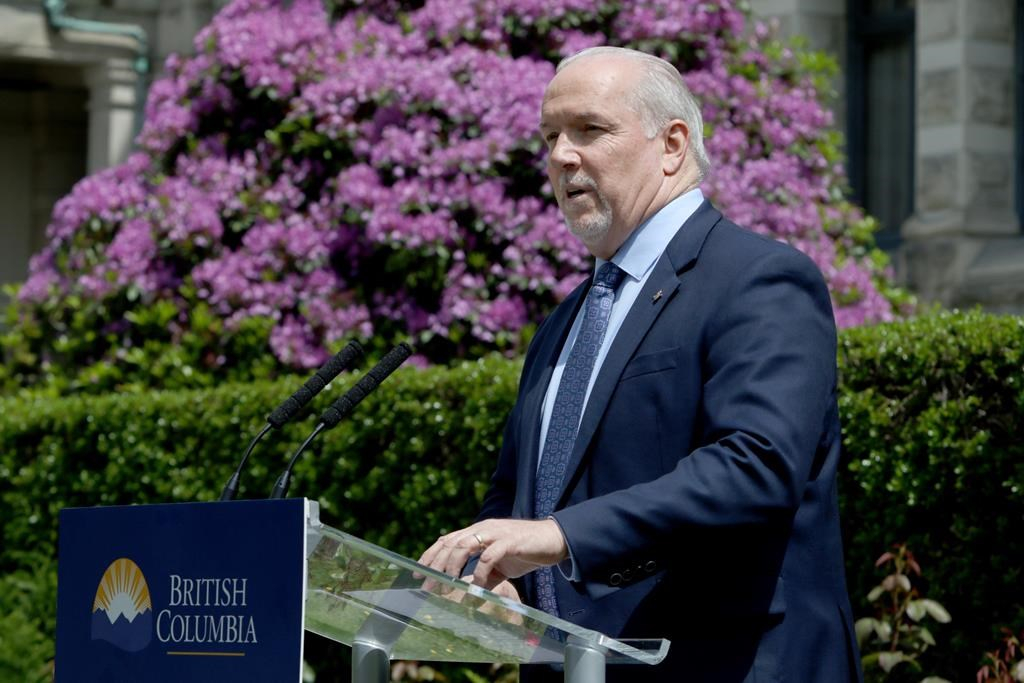 B.C. Premier John Horgan provides the latest update on the COVID-19 response in the province during a press conference from the rose garden at Legislature in Victoria, B.C., on Wednesday, June 3, 2020. Photo by The Canadian Press/Chad Hipolito
Previous story
Next story

B.C. Premier John Horgan is calling on the federal government to lead an anti-racism program, saying fighting racism needs a nationwide plan to ensure the participation and support of Canadians.

The premier said Wednesday he will lobby for a national anti-racism program during a conference call with Prime Minister Justin Trudeau and his fellow premiers Thursday.

Horgan said he's horrified by the death of George Floyd in the United States and saddened by the unfolding situation as protests continue in cities across America.

"We are pretty clear in B.C. that again we are wanting to push as hard as we can for national approaches to these vexing problems," he said at a news conference. "We have enough to deal with here in B.C. by ourselves, but if we are aided by a federal program and a federal initiative that has us all working together from coast to coast to coast, I think that lifts up all Canadians."

Horgan said a federal plan, supported by the provinces, will add strength to messages of anti-racism in Canada.

At Wednesday's news conference, he said despite efforts to treat people equally there are blotches on the province's past.

"Although we do our level best to address racism here in B.C., it exists here as well," Horgan said. "We've had certainly challenges with racism going back to the head tax for Chinese-Canadians, the Komagata Maru when it comes to South Asians and Indigenous Peoples have experienced racism from the beginning of settlement here in B.C."

He said law enforcement agencies aim to treat people equally, but there are also blemishes on that record in B.C.

"What we do in those situations is try and get better," said Horgan.

He said providing law enforcement with more tools to understand and interact with people of different backgrounds can help.

B.C. Premier John Horgan is calling on the federal government to lead an anti-racism program, saying fighting racism needs a nationwide plan to ensure the participation and support of Canadians.

"It's imperative all of us stand together," Horgan said. "Like you, I'm horrified to see what happened to George Floyd. I'm horrified when I see the response in major U.S. cities. When we look to the south it causes me great sadness, and I know the vast majority of Canadians feel the same way."

Tens of thousands of people have marched in protests, both peaceful and violent, in cities across America since video emerged showing an officer pressing his knee on Floyd's neck.

This report by The Canadian Press was first published on June 3, 2020.

I am assuming there are no

I am assuming there are no other comments because readers of the N. O have just chuckled and skipped the read. this is the leader who wouldn't meet with wet'suet'en leaders in February, and was fine with a judge to issue an injunction for fracked gas pipeline over unceeded FN land then claiming rule of law blah blah blah and is continuing with Site C dam over land claims objections..... So a big fossil promoter over all reason or economic senseok.

Not as totally destructive as the cons/bc liberals but sure as shit no human rights defender.