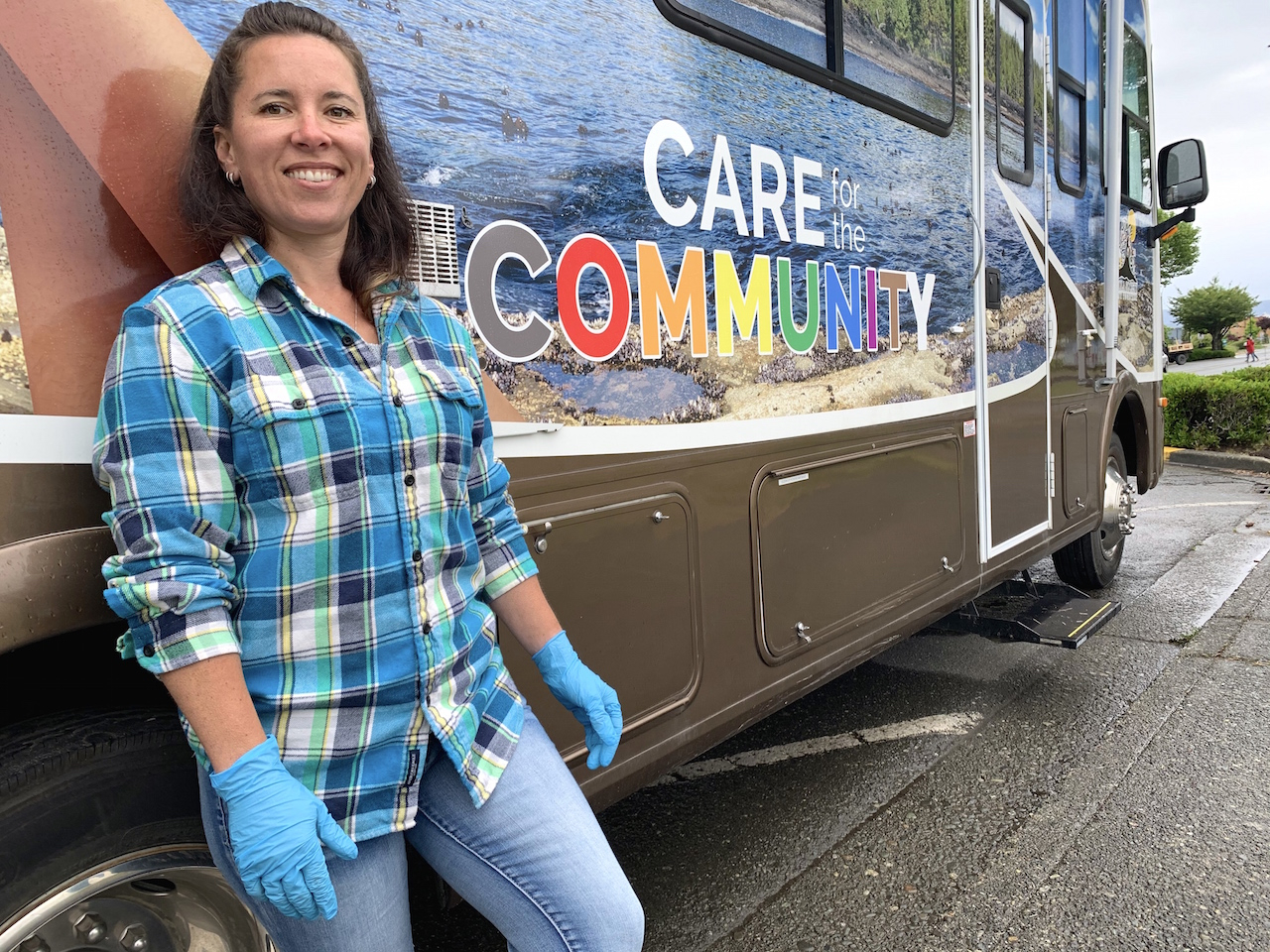 Leanne McIntee is co-ordinator of the new Mobile Outreach Unit for Health and Support Services (MOUHSS), a brightly coloured RV known as the Moose, that will move around to provide health services to the vulnerable. Photo: Rochelle Baker.
Previous story
Next story

Stores are just starting to open in the small Vancouver Island town, which is experiencing a typical "Juneuary" West Coast day — mild temperatures paired with a grey and drizzly sky.

But lodged in the middle of the city’s core is a massive, snazzy, brightly coloured RV accompanied by a woman hanging out its entry door and greeting anyone and everyone who passes.

Folks walking by stop to ask what the splashed-out vehicle is all about or to chat with Leanne McIntee, who already knows a lot of the passersby by name.

McIntee is co-ordinator of the Mobile Outreach Unit for Health and Support Services (MOUHSS), which tends to go by its moniker, the Moose.

For emphasis, a cartoon of its antlered animal namesake is plastered on the RV’s side.

The Moose is spanking new and hit the streets two weeks ago after its original rollout was delayed by the COVID-19 pandemic, McIntee said Tuesday.

People accessing the Moose can range from youth to seniors, but the main objective is to offer direct services to any vulnerable people who might not otherwise get them.

The Mobile Outreach Unit for Health and Support Services (MOUHSS) is a splashy RV – nicknamed the Moose – that will bring much-needed health services to the most vulnerable in Campbell River and surroundings. But it only has funding until August.

The RV currently heads out three mornings a week to locations either in the north, central or south ends of the city. The idea behind the Moose is to go where the need is, she said.

“We want to provide health and social service supports to people who are unable to access supports or who don’t want to access those supports in brick-and-mortar buildings,” McIntee said.

Stigma is a big reason some people won’t access community services, she said. But sometimes it comes down factors such as lack of transportation or circumstance.

A mom with three kids isn’t necessarily going to want to load everybody onto the bus and drag them along to fill out paperwork in a crowded office, she said.

Public response during the mobile unit’s initial stages has been good.

The mobile outreach unit has helped people seeking diabetes care, prescriptions for skin problems, mental health supports and has provided visits with a doctor or a substance use specialist.

But sometimes it’s just about conversation and coffee, said McIntee.

Roberta, an older woman who lives rough, has stopped by the Moose for a chat before heading to the laundromat.

She’s perched on the seat of a walker, warming her hands around her paper coffee cup. Asked what she likes about the Moose, Roberta points at McIntee.

Then the pair gets into a mock argument about who has a nicer smile.

McIntee said there was a lot of consultation before the project got up and running.

And community stakeholders can continue to provide input to determine client needs or resolve any concerns that might crop up, she said.

“We’ve opened the doors to conversation about what’s working well, what they see the struggle is, what some of the barriers are and how we can alleviate them for all folks,” McIntee said.

The mobile unit is a community project that got support or sponsorship from numerous community service groups, police, the city, as well as business organizations and health-care partners, McIntee said.

As a result, the vehicle is available for use by community partners to meet health and support services needs, particularly in the small communities around Campbell River, she added.

“We are looking at outlying communities such as Quadra and Cortes (islands), Gold River and Sayward, and we want to be able to offer services in those areas,” McIntee said.

“If (Island Health) wants to go down to Gold River and offer doctor’s services because there isn’t any, or to go Sayward to offer mental health or harm reduction supports, the vehicle is there for that.”

Residents in isolated or rural areas don’t always get the health supports they need, she said.

Either because they don’t exist or because people don’t feel comfortable with the lack of anonymity around getting services in a small community, McIntee said.

Despite the desire to help vulnerable people in smaller communities and Campbell River, the Moose only has funding until August, said McIntee.

Seed funding for the project came from the First Nations Health Authority, grants and community donations.

McIntee hopes to secure more permanent funding from the province or health authorities.

But community donations play a big role in what the Moose can provide to its clients, she said.

Water, socks, feminine hygiene products, ChapStick are all items in high demand by the Moose’s clients.

“It’s a surprisingly huge expense, and when people donate them, it helps so much,” said McIntee.

Some people have also sewn cloth masks and knitted wool hats to hand out in cold weather.

“There are a lot of amazing individuals out there that have very special talents that have donated to us,” McIntee said.

“And I just want them to know, it’s very appreciated.”

For more information on the MOUHSS contact [email protected]