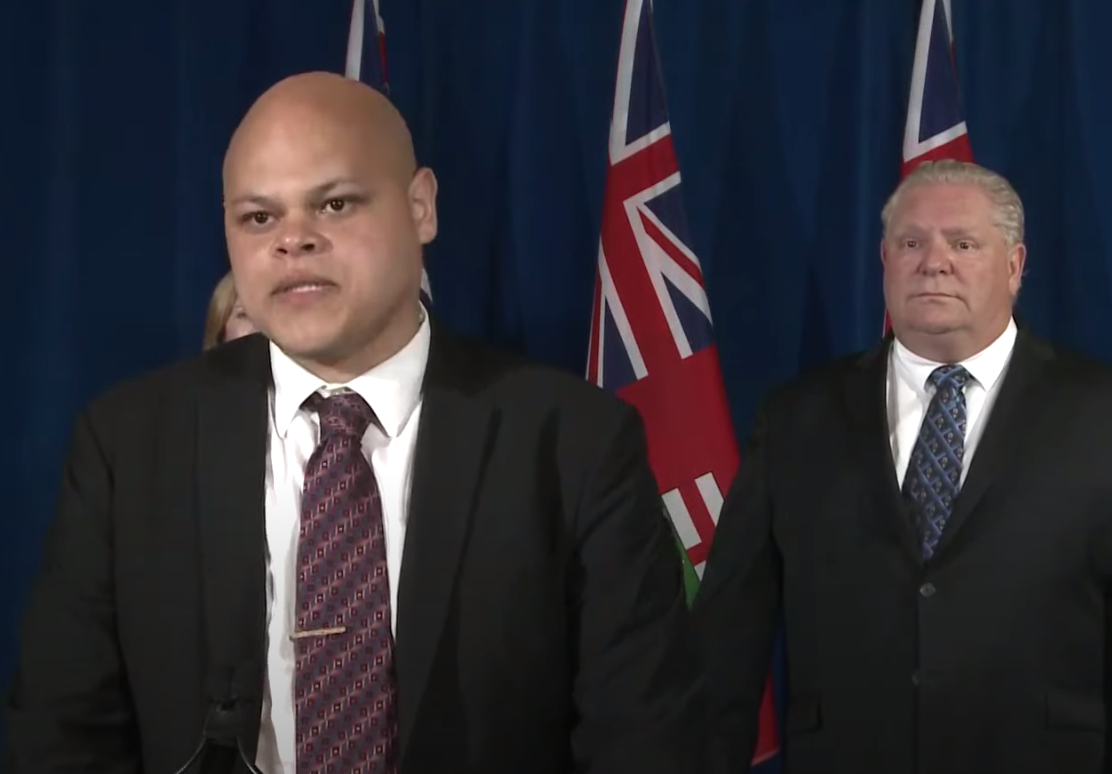 Ontario Premier Doug Ford announced the creation of an advisory group to tackle inequality Thursday, the day after backpedalling to acknowledge that systemic racism exists in the province.

After refusing to say whether he thought systemic racism was a problem Tuesday ⁠— adding, “We’re different than the United States, we don’t have the systemic, deep roots that they have had for years” ⁠— Ford reversed course Wednesday and said, “Of course there’s systemic racism in Ontario.”

Though the premier said Thursday the advisory council had been planned long in advance, critics said he was doing damage control.

“This announcement is even more evidence that Mr. Ford doesn’t take addressing the cancer of systemic racism seriously.”

Ford also said his comments earlier this week were “spun out of context,” and that systemic racism in Ontario has existed for “decades.” In fact, it has existed for centuries ⁠— Canada’s very founding was based on the genocide of Indigenous peoples, and Canadians were actively involved in the enslavement of Black people for more than two centuries.

The panel will have $1.5 million in funding, and is led by lawyer Jamil Jivani, Ford’s adviser on community opportunities. It is focused on giving advice to the premier on how young people can overcome systematic, socioeconomic barriers, and how best to support youth during the COVID-19 pandemic.

Ford’s announcement comes as violence erupts across the United States in response to the death of George Floyd, a Black man who died pleading for his life as a police officer knelt on his neck. Demonstrations in Canada have also sprung up in response to Floyd’s death, and that of Regis Korchinski-Paquet, an Afro-Indigenous woman who fell to her death from a 24th-floor balcony while police were present. (Ontario’s police watchdog is investigating Korchinski-Paquet’s death.)

Ford ⁠— who represents Etobicoke North, the riding in Ontario with the highest percentage of Black residents ⁠— has a history of coming under fire for what critics say is a fundamental lack of understanding of racism and its causes.

Critics said the new anti-racism council was an attempt at damage control, and pointed to Ford's history of statements and actions that they said showed a fundamental lack of understanding of racism and its causes. #onpoli

“Racism isn't just about religion and colour and race. It's about going after someone relentlessly on a daily basis,” he said in 2014, incorrectly.

When he was running for premier in 2018, Ford was the only candidate to decline to attend a debate organized by Black community leaders.

He was also booed after saying he supported bringing back a controversial policing program that used "carding," which was widely maligned by critics and community members who said it worsened tensions between people of colour and police. Carding is now banned in Ontario, and evidence suggests such tactics alienate racialized people and harm the long-term ability of police to investigate crime in racialized communities.

Ford claimed on the campaign trail that no other politician in Canada had supported the Black community as much as he did. When reporters asked him how, he said: "I brought 80 kids from the Black community up to my cottage, every single year for the last three years. We have a great time.”

After he was elected, Ford posed for photos with Faith Goldy, who praised white nationalists at the deadly Charlottesville neo-Nazi protest, said a neo-Nazi slogan on a podcast for the neo-Nazi site the Daily Stormer and added that she "doesn't see that as controversial," advocated to “return” Canada to a population that is “96 per cent Euro-Canadian” and said she wants to "launch the next Crusade" to "reclaim Bethlehem."

After three days of uproar from opposition MPPs and anti-hate groups, Ford said in a tweet that he wouldn’t tolerate hate speech from anyone, including Goldy.

Ford also took fire after his election for appointing a cabinet that included one person of colour. He has expressed support in the past for U.S. President Donald Trump, who has a long history of making racist comments and policies.

Ford’s press secretary did not respond to questions from National Observer about the premier’s definition of systemic racism, whether it has changed since his comments in 2014 and whether he still supports Trump.

Stephen Warner, a spokesperson for Ford’s solicitor general, Sylvia Jones, said in an email that the Progressive Conservative government has “zero tolerance for racism, hate, or discrimination in all of its forms.”

“You have a premier that is deploying the language of ‘systemic racism,’ but clearly doesn’t understand what systemic racism is and how it is actively maintained through policy, funding and legislative decisions,” said Nisha Nath, an assistant professor of equity studies at Athabasca University.

“One need only trace just some of the premier’s funding decisions to see where there is a clear racialized impact and racialized harm.”

'There is distrust in the community, and rightfully so'

On Thursday, opposition parties criticized Ford for the creation of the panel, which they said did not make up for previous government cuts to programs benefiting racialized people.

Liberal MPPs Michael Coteau and Mitzie Hunter pointed out in a joint statement that Ford cut a previous council with a similar function in 2018, and cut funding to the Black Youth Action Plan, which provides services and supports to young Black people.

“This is two years of lost progress,” the MPPs said. “We would invite him to reverse further cuts he made to programs to fight systemic racism and support Black youth.”

Ford said the creation of the council was not an attempt to backtrack, and Jivani said previous government efforts seemed focused more on talking than making real changes. “We want to impact policy so we can see real action,” Jivani said.

Jivani also said he wanted to address the pain felt by Ontario’s Black communities due to racial inequality and racism in Canada and in the U.S.

“There is distrust in the community, and rightfully so,” he said.

Ford previously cut a $25-million program that included grants to support racialized students. His government also held back funding for a cultural hub in Toronto’s Lawrence Heights, and cut funding to the Anti-Racism Directorate, which gives advice on ending systemic racism in Ontario.

Ford has also cut other programs that benefited racialized youth ⁠— including funding for post-secondary, public health and libraries.

“Particularly as we are confronted with such great clarity with the fascist state police violence in the U.S. right now, we also know that this is a fundamental part of our story in Canada,” she said.

“The role of the police in sustaining and carrying out racist violence is established. And this surveillance and targeting of Indigenous, Black and other racialized communities in Canada by the police is intrinsically connected to this broader racialized infrastructure signalled by the cuts of this government.”

South of the border, communities are discussing possible ways to reallocate police resources to support communities instead.

“I certainly think this would be an integral and serious first step here as well,” Nath said.

“I support more funding for community resources,” he said. “I don’t believe in cutting the police. Everybody in our community has to be part of solutions. That’s what it comes down to.”

Panels and commissions just serve ado-nothing approach. Studying things does not do anything. It seems to me that we already know the answers we want and need to LTC and policing. Some jurisdictions have already started acting, legislating, keeping the faith on these issues. Panels and commissions just push it all away in hopes that life will make us all forget and nothing will really have to be done. Premier Ford, act now.

Perceptive comments, and I

Perceptive comments, and I hope that the Observer follows up on the panel in the future to see what it accomplished (or did not accomplish).

Doug Ford and his government

Doug Ford and his government have continued and accelerated a fundamentally systemic racism in government in Ontario. The evidence is readily available to anyone who wants to look. He is, however, not alone. The same can be said for most provincial governments and most federal governments in the present day and the history of Canada. Time to stop the BS, call it what it is, and get on with dealing with it.