Movies to stream: A feminist Judy & Punch, workers’ plight in Bangladesh and climate optimism in 2040 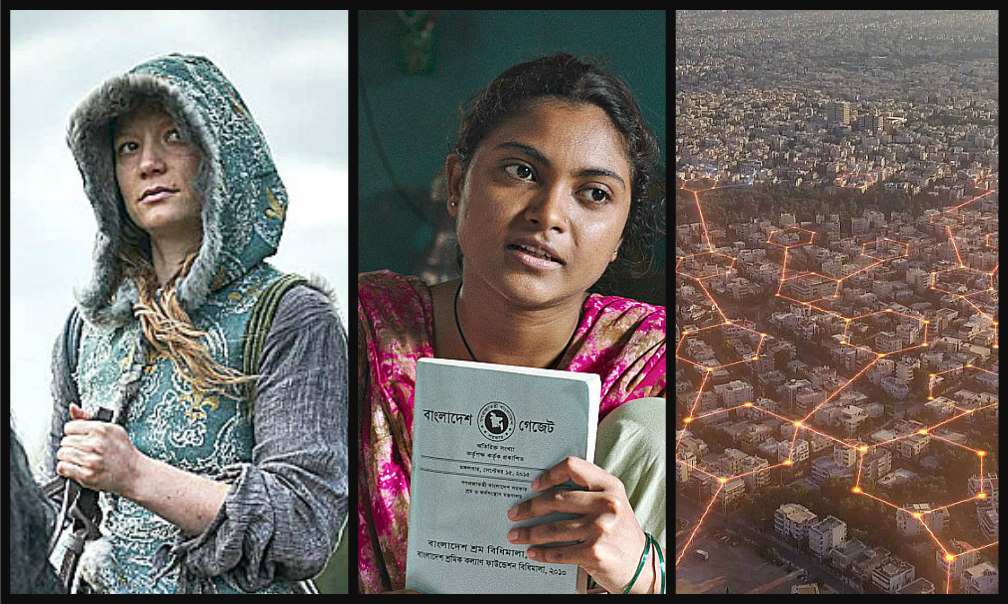 Also a variation on a big Oscar winner, a Hitchcock wanna-be, a case of homophobia and two home invasion thrillers.
Previous story

There are a lot of new films available to stream this week, including several that I recommend highly. Read on.

Parasite in black and white: 4½

Survive the Night: not rated

JUDY & PUNCH: The names are in that uncommon order because in this entertaining film, Australian actor-turned-director Mirrah Foulkes is making a point about male versus female power. Punch, armed with a bat, is always the winner in the puppet show that generations of children have seen. In this live re-imagining, set in a fairytale village, he’s “the greatest puppeteer of our time” in public, but a self-aggrandizing drunkard in private. Judy (Mia Wasikowska) is the real talent, though unacknowledged.

Society around her, as the film points out in several ways, downgrades women. There’s even a “Happy Stoning Day” to punish the evil ones. The messages are obvious, but they come in a film with a zippy pace and great fun and then revenge. Punch (Damon Herriman) inadvertently causes the death of their baby, attacks Judy, leaves her for dead in the woods and blames a senile couple. Judy is found alive, healed in a “heretic camp” of misfits that the village has rejected, and makes her way back. The denouement is violent, too much so for young children, but the contempt for misogyny and the imagination used here to express it are satisfying. Also nutty and absurd at times, as when a Leonard Cohen song plays. The two leads fit their roles nicely. We last saw Herriman playing Charles Manson for Tarantino. (Available starting today to buy or rent, EST and VOD.) 4 out of 5

MADE IN BANGLADESH: Yeah, like the T-shirt you might be wearing. We see where they’re sewn; a crowded hall of sewing machines, jumbled wires and stifling hot air. The workers are all women; only the supervisor and the owner are men. They demand more output and promise they’ll pay the overtime they owe, just not yet.

A fire, a death and some encouragement from a union leader gets the women angry. One, named Shimu, and played by the similarly named Rikita Nandini Shimu, decides to sign up members to form a union, and the film expertly shows what impediments there are in her way and what women like her have to put up with. Her husband is lazy and unemployed. Her best friend is sleeping with the supervisor. The boss is under pressure to keep cutting costs because the buyers demand to pay less. The women get very little of it. Shimu is told that just three of the T-shirts that she makes sell for what she earns in a month. The biggest hurdle is the government bureaucracy that stalls her union efforts. This is an eye-opening film, made with strong commitment by Rubaiyat Hossain, one of that country’s very few female directors. It’s a little too earnest, but real. (Streaming at https://viff.org) 3½ out of 5

2040: Most films about climate change and global warming are full of gloom and dire warnings. Here’s one that takes a different approach and leaves you with a measure of optimism. Australian filmmaker Damon Gameau focuses on what can be done, and, specifically, what we already know to do. So, no grand schemes that have to be thought up sometime, somewhere; but ideas that people are actually working on. The array is mind-opening; the last one is astonishing.

Some you already know. Solar power, for instance, but in Bangladesh, Gameau is told about mini power grids with which entire neighborhoods are linked to produce and share electricity. He visits 11 countries in all and hears ideas for changing agriculture (less monoculture, mixed crops, free grazing of animals and “re-generation”), reviving the oceans (“overturning circulation,” seaweed farming) and cutting greenhouse gasses (urban farming, shared on-demand cars). There’s much more, all perfectly understandable and logical. The film sprinkles tantalizing bits of information to back its thesis. Did you know that the United States imports as much beef as it exports? That two-thirds of Los Angeles is roads and parking lots? That one-third of all crops grown are for animal feed? It calls for less meat eating, not an outright ban. And one of the most promising weapons against global warming would be more education for women around the world. It's an unexpected highlight in this inspiring film. (VOD/EST.) 4 out of 5

PARASITE: The big winner at this year’s Academy Awards is back in a new version. The regular one has been available for streaming for over a week. This one is in black and white. No colour. Why? The director Bong Joon-Ho grew up watching movies in black and white on television and felt he wanted to recreate that experience. He says it is more realistic and feels more like a fable. I think it requires a cinema purist to appreciate that distinction. I didn’t have the same feeling.

Yes, the early parts in the family’s grim basement suite felt right, but I thought later, when they got to the modern, bright, architect-designed home, colour would have helped create the upscale ambience. However, we’ve seen enough classy homes in films from the 1930s and later that even that isn’t a detriment. What mostly comes apparent once again is how well this film is written. How it draws us into every step of the family’s deception and then the shock of what they find down in the bunker. Come to think of it, those later scenes are almost black and white anyway, so nothing is lost there. In either presentation, this is good for repeat viewing. (Available to rent or own at www.mk2mile-endmovies.com) 4½ out of 5

LOVE, SCOTT: Here’s a relatively brief, but very moving, story of a homophobic attack that created an activist. It’s a crisp documentary with the real facts about and the feelings of Scott Jones, who was beaten up outside a bar in Nova Scotia and remains paralyzed from the waist down. He recalls that he had checked out the guy in the bar and got a look back that every gay man knows well. The man was caught and sent to jail for 10 years, but the court records do not mention the gay part of the story or refer to the assault as a hate crime. “I we cannot name the attack for what it was. How can we begin to correct problem?” says Jones.

Jones is now a speaker on gay issues, and the leader of a choir. The film by his friend Laura Marie Wayne shows scenes from three years of rehab, a trip back to where it happened, a first attempt to stand up, and a lot of thoughtful introspection about his life. He even tries to forgive, and in a particularly poignant sequence, writes his attacker a letter. They’re both prisoners, he writes, he paralyzed and the guy incarcerated. Another very good documentary that the National Film Board has put up for free streaming at https://www.nfb.ca/ 3½ out of 5

BECKY: Here’s a home invasion thriller that starts like many of its kind do. A brief setup with much edge-of-the-seat suspense expected to follow. You’ll be shocked by what comes, though. I haven’t seen a film this violent in some time.

It’s a bonding weekend at the lake gone wrong. Father (Joel McHale) announces to his teenage daughter (Lulu Wilson) that he’s ready to remarry. He hopes Becky will warm up to his girlfriend, who is also there. Becky does not. She’s angry that her mother died and accuses dad of disrespecting her memory. This little family drama is completely sidelined, though. Four convicts who’ve escaped from a prison transfer bus arrive looking for a lost dog, according to their leader (Kevin James, the former King of Queens and twice a Mall Cop). Not so, we suspect, since he’s got a swastika tattooed on his neck. And sure enough, he’s looking for something else. We never do find out what he’s really about. The film builds a vague sense of unease, then real suspense and then goes nuts. You’ll see all sorts of bloody damage caused by a ruler, coloured pencils, a car and a power lawnmower. It’s an American film well-made in Ontario, but as you might agree, for select audiences. (Available now on digital and on demand.) 3 out of 5

LAST MOMENT OF CLARITY: I’m not sure when that was because I didn’t feel it. When it’s not hobbled by an opaque plot, this film is strewn with improbabilities. If you like puzzles, this might be for you. It you want certainty, not so much.

Sam (Zach Avery) is hiding out in Paris and it takes a long time, through a lot of shards of flashback, to find out why and from whom. Actually, we don’t find all that out. Only that he sees a woman acting in a movie who he thinks is his girlfriend. He lived with her in New York, accidentally saw something Rear Window-like in an apartment window and had somebody come after him with a gun. The girlfriend died instead. So, how could she be alive, now with blond hair and making movies? He goes to Los Angeles to find out.

He does confront the actress, but she doesn’t recognize him. He runs into a distant friend from high school (Carly Chaikin), who sympathizes, but doubts his story. He thinks he’s losing his mind until a couple of Bulgarian mobsters come after him. If it made some sense, as in a Hitchcock movie, this might be good. But it’s got more energy than logic. Brian Cox and Udo Kier have small roles, and the one bright spot is Samara Weaving (niece of Hugo) as the actress. (Avalable now EST/VOD.) 2 out of 5

SURVIVE THE NIGHT: I hope Bruce Willis enjoys memories of his past movie successes because he’s not adding to them these days. He’s been in a run of weak films for some time now. Have you even heard of Trauma Center from last year? Well, he’s back working with the same director, Matt Eskandari, and this film is likely to fade away just as quickly. What’s worse, though his name is big in the promotion, he’s almost a secondary character in the film. He plays the father of a doctor (Chad Michael Murray) who is bankrupt after a malpractice lawsuit, but impelled to wield his scalpel again. Bruce is there to carp, then encourage, and later to regret that he hadn’t been a better father.

In this home invasion thriller, two brothers barge in, one having taken a bullet in the leg during a gas station robbery and in need of a quick bit of surgery to get it out. The son starts the procedure (painfully), his dad, a retired sheriff, interrupts it by attacking with the scalpel, but gets slashed himself and is chased out into the woods. The film feels more and more contrived. The doc gets shot in the shoulder, but is ordered to finish the operation and a lot happens, including a car chase and wife and daughter imperiled, before he gets back to it. The incidents don’t feel genuine and, worse, don’t build the high suspense a film like this needs. (Available to buy or rent, EST/VOD, since Tuesday) 2 out of 5