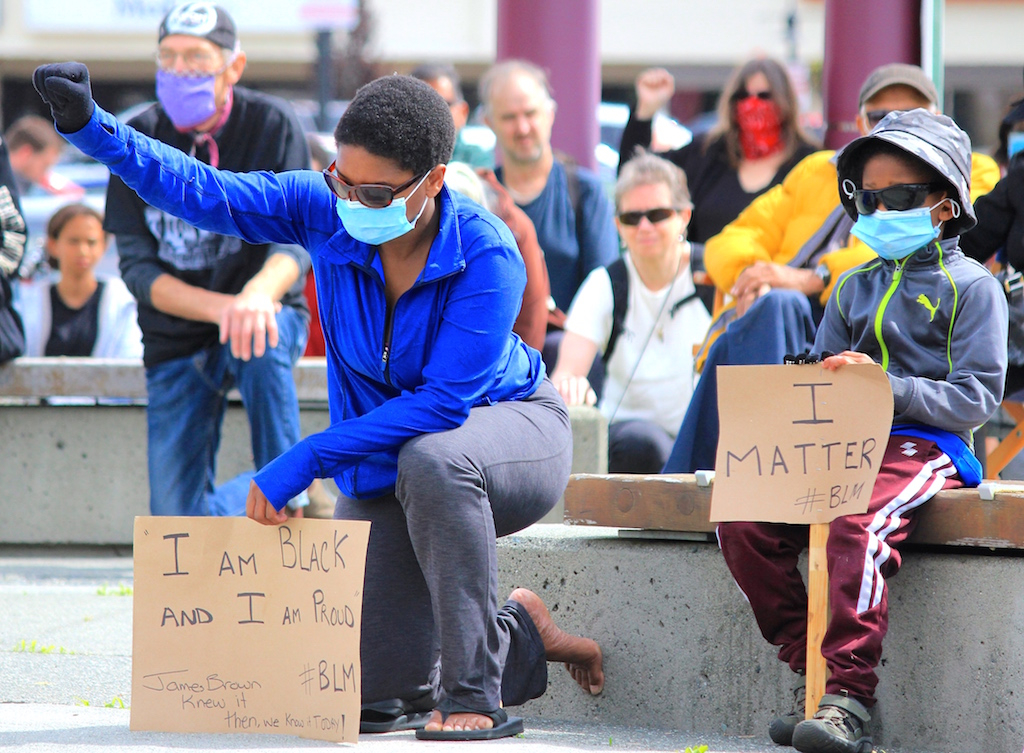 Upheaval from massive Black Lives Matter demonstrations in cities across North America rippled across small communities in B.C., as they also rallied over the weekend to protest police violence and racism against Black people, Indigenous people and people of colour locally and nationally.

Hundreds of people in Campbell River’s Spirit Square took to their knees and bowed their heads in silence for eight minutes, 46 seconds.

Following the silence, speakers got on stage to speak about their experiences with racism and to call for justice and healing.

But Devon Charles did not. Could not.

“It’s very emotional and I think I would cry.”

He, his wife and young son attended the protest in their small city on Vancouver Island in solidarity with all Black people, Indigenous people and people of colour who experience racism, whether from ordinary citizens or by police, Charles said.

“I would like people to recognize that we have experienced a lot of trauma, hardship, rejection and exclusion,” he said.

“He looked like he was coming to kill me. He handcuffed me and didn’t even ask what happened,” Devon Charles on being detained in public by police in front of his son after the toddler was crying in public.

He recalled an instance when he was detained in public in front of his child due to an assumption he was abusing him.

His son, two at the time, was having a meltdown because he’d spilled water on himself, Charles said.

“I had him outside and was cleaning up his clothes,” Charles said.

The pair had been waiting outside the Campbell River hospital to pick up his wife from work.

Five minutes later, after his son had already calmed down and was sitting in their vehicle a police officer showed up.

“He looked like he was coming to kill me,” Charles said. “He handcuffed me and didn’t even ask what happened.”

Police have little or zero training in dealing with Black people from different cultures, he said. Something he personally would be willing to rectify.

“I’m willing to educate police and be in a class talking about how people should be treated and our struggles,” Charles said.

“We don’t want much. We just want to be treated equally.”

Sisters Camisha and Lakeshia Jackson spoke to the crowd about their feelings and experience.

People assume that as a Black person her successes are due to assistance from a white person, Camisha said.

“I put myself through school,” she said. “I am so sick and tired of people undermining my own success by people by (saying) a Caucasian person was behind it,” she added.

“Nobody gave me my degree. Nobody started my businesses. I did it all by myself.”

Lakeshia said she grew up in Campbell River, but her family originally hailed from Atlanta, Georgia.

“And we’re struggling over there,” she said.

Violence against Black people provoked a surge of emotions for her, but she was grateful for the community’s support.

“I have so many thoughts and feelings. I’m mad, I’m sad and I’m scared, but I’m glad that you guys are all here to support me,” she said.

“And it would be doing a disservice to my ancestors to not get up here and thank every single one of you who came down here right now.”

First Nations leaders also took to the stage to express their solidarity as allies of the BLM movement and share their own experiences with racism.

Darren Blaney, Chief of the Homalco First Nation, spoke of the fears he has for his sons and the casual, everyday discrimination First Nations people face.

“How many times will they be stopped by police or followed by security?” Blaney asked.

Indigenous people suffer repeated interactions and contacts with police because they “fit the description,” he said.

“Sometimes I’m not sure if it’s racism or helpfulness,” Blaney observed wryly.

The death of George Floyd should be taken as a moment of awakening, a recognition that a larger system of discrimination is at play in all communities, said Blaney, who added he lost his language when he was forced to attend residential school as a child.

When people look down at homeless people in the streets of Campbell River they are not recognizing them as victims of a long history of racism, Blaney said.

People need to see the connection to the trauma and pain residential schools have left in their wake, he said.

Poverty is another form of discrimination, Blaney said.

Government needs to curb corporate greed and tax cuts, and shift its focus to preserving the environment and people, he added.

“All these corporations are not accountable to anybody, or the environment or poor people.”

The crowd attending the protest was diverse, including babies, families, youth and seniors and allies from the LGBTQ2S+ community.

Many demonstrators arrived by ferry from neighbouring Quadra Island.

Quadra resident and long-time educator Jan Gladish said she was impressed and moved by the demonstration.

As a member of the Heiltsuk Nation and former principal of the school in the tiny north coastal community of Bella Bella, Gladish worries for the future of Indigenous youth and about the continued inaction around First Nations issues.

Few concrete changes or significant progress has occurred for Indigenous people despite recommendations issued by the Truth and Reconciliation Commission or the National Inquiry into Missing and Murdered Indigenous Women and Girls, Gladish said.

“I worry that those two big initiatives are gathering dust on shelves, and we are not doing what we need to do to raise awareness and actually do something that will make a difference in people’s lives,” she said.

The MMIWG report marked its first anniversary last week, the same week Chantel Moore, a 26-year-old woman who was a member of Tla-o-qui-aht First Nation, was shot and killed by police in Nova Scotia during a wellness check, Gladish said.

“For me it hits home,” she said. “It’s indicative of just some of the things that happen. It’s just like life doesn’t matter.”

“I have nephews and nieces, and former students, and that’s the kind of world they are going out into,” Gladish added.

“And things have to change if they want to follow their hopes and dreams in a way that is inclusive of who they are.”