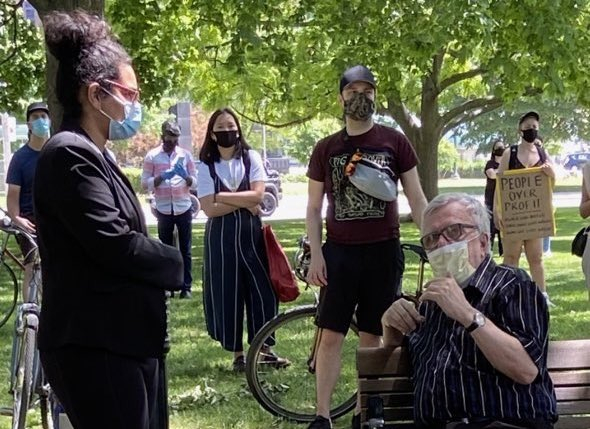 Tenants and advocates rally at Queen's Park on June 9, 2020, to demand a ban on pandemic-related evictions and rent forgiveness. Photo by Caryma S'ad
Previous story

Tenants from across the Greater Toronto Area rallied outside Queen’s Park on Tuesday, calling on the Ford government to ban evictions and forced repayments for tenants unable to make rent due to the COVID-19 pandemic.

Organizers and tenants from Toronto neighbourhoods including Parkdale, Scarborough, Jane and Finch, and East York wore masks and stood apart in an effort to limit the risk of spreading COVID-19, which has hit their areas particularly hard both in terms of infections and job losses.

“We want evictions and forced repayments for tenants that have been unable to pay rent during the COVID-19 crisis to be taken off the table,” said Bryan Doherty, one of the organizers of Keep Your Rent, a movement helping tenants push back against corporate landlords.

He argued that tenants leading the protests mostly live in apartment buildings owned by large corporations more able to take a financial hit than the tenants in their buildings.

“These are far from the mom-and-pop landlords that everyone wants to talk about on the news,” he added. “These are multi-million if not multi-billion dollar corporations that have been making money hand over fist for the last decade and a half.”

Advocates warn that huge numbers of tenants who have fallen into arrears during the pandemic face crippling rental debt repayments and the risk of eviction once the provincial government lifts a moratorium on such proceedings at the Landlord and Tenant Board.

“Despite the suspension of evictions, thousands of tenants have received threats from landlords to evict them once the courts reopen,” Sam Nithiananthan of People’s Defence Toronto said in a statement.

Caryma Sa'd, a lawyer who acts on behalf of both landlords and tenants and attended the rally, said the larger problem is Ontario has no limit on how much a landlord can increase rent once a unit has been vacated.

This makes tenants more desperate to hang on to the homes they live in and creates an incentive for landlords to push people out, she said.

“The root of the problem has nothing to do with COVID, but everything to do with supply and demand, and how we treat housing as a commodity as opposed to an essential right,” she said.

While major Canadian banks have deferred some 16 per cent of their mortgage books — backed by federal regulators treating the deferred mortgages as performing loans — neither Ottawa nor the Ford provincial government have offered any specific relief to residential tenants.

The Ford government did not respond to questions about what it is doing to limit evictions or avoid pushing vulnerable people into debt.

It is, however, pushing changes to tenancy law through the legislature that would make it easier for landlords to evict tenants if they are unable to meet the terms of a rent arrears repayment plan.

A committee of the legislature will consider changes to Bill 184 later this month before it is brought back to the house for a final vote.

Doherty says the pushback from tenants learning to band together will continue in the face of landlords pressuring for payment from those who are struggling.

“We will continue to organize,” he said. “We are not going to be intimidated by N4s (notices of eviction), people banging on doors and threats of eviction, security guards or police.”

Millions of Canadians have

Millions of Canadians have been forced to stop working and give up their wages. Many have permanently lost their jobs. Why are landlords excluded from this sacrifice?