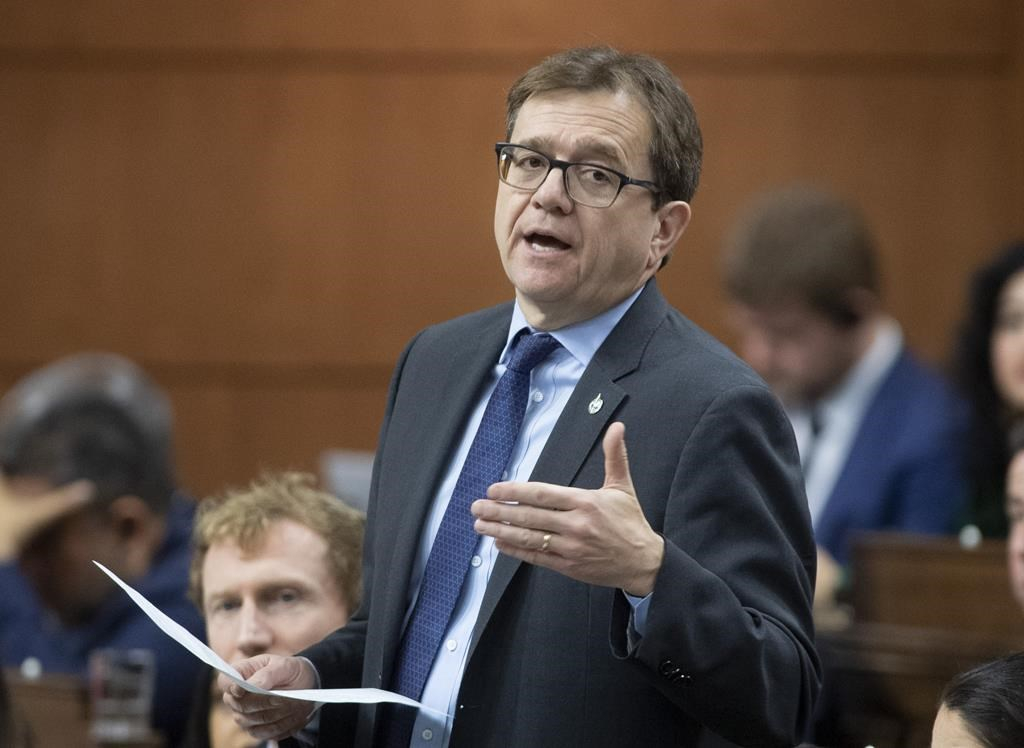 Environment and Climate Change Minister Jonathan Wilkinson responds to a question during Question Period in the House of Commons, in Ottawa, on Monday, Feb. 3, 2020. File photo by The Canadian Press/Adrian Wyld
Previous story
Next story

A dozen conservation and Indigenous groups have written federal Environment Minister Jonathan Wilkinson asking him to force the Alberta government to reinstate environmental monitoring in the province's oilpatch.

"We feel the federal government does have something at risk here," said Gillian Chow-Fraser of the Canadian Parks and Wilderness Society, one of the groups that signed the letter sent Tuesday.

The province's energy regulator decided earlier this spring that companies no longer have to live up to a wide array of environmental monitoring requirements that are a condition of their licences.

The suspensions include air, water, land and wildlife measures. Most have no end date.

The regulator says the decision was made to protect workers and communities during the COVID-19 pandemic.

Chow-Fraser said the suspensions will affect Wood Buffalo National Park, a UNESCO World Heritage Site downstream from Alberta's oilsands. Federal assessments have already acknowledged the park is under threat and UNESCO has warned that the park's status could be endangered if environmental problems aren't addressed in a federal action plan.

"That action plan references all these provincial regulations and regulatory bodies that the plan said should protect the park," Chow-Fraser said. "Those are the exact regulations that have been unilaterally suspended."

The signatories want Wilkinson to urge Alberta to end the suspensions and find out how they may have affected ongoing work at Wood Buffalo. They also want him to withhold any pandemic-related aid to the province's energy industry until the suspensions end.

Other area First Nations are in favour of the letter.

A dozen conservation and Indigenous groups have written federal Environment Minister Jonathan Wilkinson asking him to force the Alberta government to reinstate environmental monitoring in the province's oilpatch.

"We do support it," said Melody Lepine of the Mikisew Cree.

In an email sent Tuesday, the Alberta Energy Regulator said the suspensions could come off as early as Aug. 15 if two ministerial orders from the province's energy and environment departments are left to expire.

It said that figures supplied by industry suggest that between 95 and 98 per cent of environmental regulations remain in place.

"That's nice to hear, but we still don't have any certainty on that.

"They are very vague suspensions. There are no deadlines. We don't have any certainty that it won't be several months, half a year, a year."

Earlier this week, three different northern Alberta First Nations filed a request to appeal the regulator's decision to suspend monitoring. Their request points out First Nations weren't consulted, despite the decision's impacts on their treaty rights.

It also says the suspensions were made without any rationale linking specific activities to COVID-19 risks and despite work continuing at energy facilities. It adds the hold on monitoring came weeks after the province declared a state of emergency over the pandemic and just as Alberta was starting to ease its lockdown.

This report by The Canadian Press was first published June 10, 2020

No question any federal COVID

No question any federal COVID relief funding for oil and gas operations in Alberta should be contingent on the province reinstating environmental monitoring and associated reporting, and companies are operating in compliance with their authorizations. If Kenney is pushing ahead with, and possibly accelerating “reopening” in Alberta, there is no conceivable excuse for not resuming those obligations. Aside from being a cost-saving measure for those companies, the absence of monitoring data and associated mandatory reporting will likely have a negative effect on regulatory investigators’ ability to launch investigations into non-compliance with Alberta’s environmental legislation and companies’ approvals to operate. The ability to gather evidence of unlawful releases into the environment will be significantly compromised. When major industrial facilities such as those in northern Alberta are operated at reduced capacity, the likelihood of upset conditions and associated releases into the environment is increased because the facilities are not really designed to run at less than optimal levels of throughput. The government of the Province of Alberta and its agent the Alberta Energy Regulator are literally running interference for the oil and gas sector in the province.

It's shameful that the

It's shameful that the Alberta government (and others) is using Covid-19 as an excuse for cutbacks to environmental monitoring. I feel angry about this! There is no legitimate reason to do this.
Kenney also has cutback the Alberta Energy Regulator. Why isn't there more public outcry?