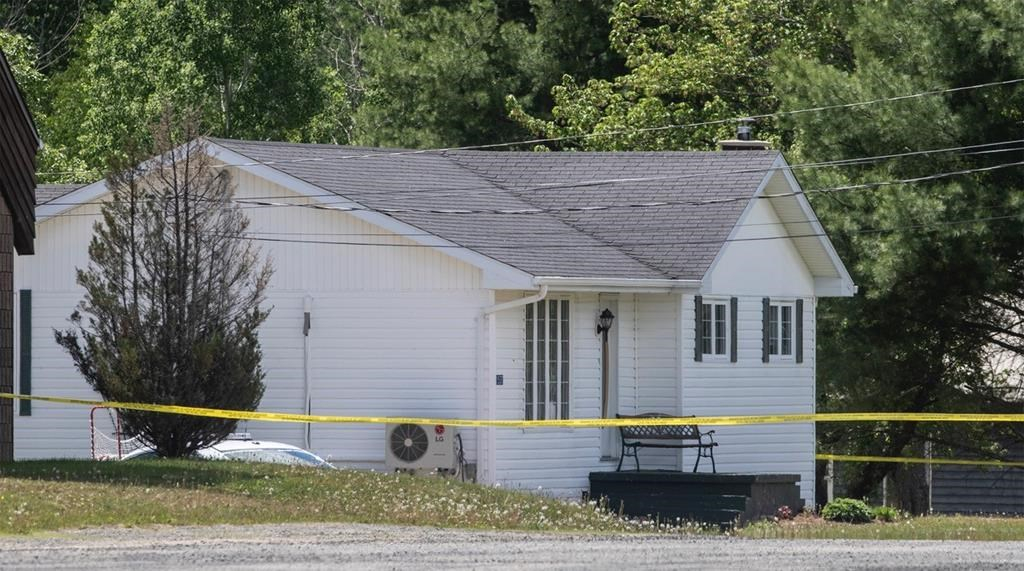 A house is surrounded by police tape where a man was shot on Friday night, near Miramichi, N.B. on Saturday, June 13, 2020. File photo by The Canadian Press/Ron Ward
Previous story
Next story

A former provincial ombudsman says the recent police shootings of two Indigenous people in New Brunswick have left him feeling distraught over the lack of police training on dealing with mental health issues, like those presented by the two victims.

"I've long felt that police are not really well equipped to deal with these kind of cases," Bernard Richard said in an interview Sunday.

"In most provinces (including New Brunswick), there are crisis intervention units that are available around the clock to respond to these types of situations."

However, there has been no indication whether police sought the help of mental health experts before the deadly shootings in Edmundston and near Metepenagiag Mi'kmaq Nation, west of Miramichi.

"That would be one of the first questions I would have to ask," said Richard, who served as the province's ombudsman from 2004 to 2011 and now advises six Mi'kmaq First Nations in New Brunswick on child protection issues.

"I was a bit stunned that, in both these cases, the primary response was police, and they felt it necessary to use lethal force."

And in both cases, police were called to deal with people who appeared to be suffering from mental health challenges, Richard said.

On Friday night, the RCMP say they received a complaint about an "unwanted person" at a home near Metepenagiag in eastern New Brunswick.

When officers arrived, they were confronted by a man carrying knives, and there were several failed bids to subdue him with a stun gun, police said.

That's when 48-year-old Rodney Levi was fatally shot by an officer. He was declared dead in hospital around 9 p.m. local time.

On Saturday, the chief of the Metepenagiag Mi'kmaq Nation said Levi was attending a barbecue, where he had planned to seek guidance from a church minister.

A former provincial ombudsman says the recent police shootings of two Indigenous people in New Brunswick have left him feeling distraught over the lack of police training on dealing with mental health issues, like those presented by the two victims.

Bill Ward described Levi as a troubled man who was seeking help with his mental health, but the chief insisted he was not violent.

"He had his demons but he was always very friendly," Ward said Saturday. "He never tried to harm anybody ... He wasn't some monster that they're going to try to paint him to be."

On Sunday, Ward issued a statement asking members of his community to refrain from speaking to the media about the Levi case, saying an independent investigation was underway. Ward said he was responding to a request from Levi's family.

Later in the day, the minister who invited Levi to the barbecue, Rev. Brodie MacLeod of the Boom Road Pentecostal Church, issued a statement saying Levi was a "welcomed guest" who shared a meal with his family.

A spokesman for the New Brunswick RCMP said Sunday no one was available to comment on the case.

On June 4, 26-year-old Chantel Moore was shot by an officer with the Edmundston Police Department.

The municipal police department later said an officer performing a wellness check allegedly encountered a woman with a knife.

Moore, from a First Nation in British Columbia, had moved to the community in northwestern New Brunswick to be closer to her mother and young daughter.

The bureau issued a statement saying it does not comment on the events it is responsible for investigating.

Richard, who also served as the child and youth advocate in New Brunswick and British Columbia, said he took part in a "healing walk" Sunday in Moncton, N.B., that paid tribute to Moore and also raised questions about the Quebec agency's impartiality.

"I heard yesterday, loud and clear, folks don't trust the so-called independent review process," Richard said. "There's really not much expectation that the investigation, in each case, will actually meet the expectations of the community."

Any reviews of the cases should involve Indigenous expertise, he said.

As well, he said he has investigated cases involving police in the past, and he has recommended that police departments should hire plain-clothes social workers to help officers sort our domestic disputes and mental wellness assessments.

He's also called for the use of police body cameras.

"This tragic loss comes at a time when people across the country — and around the world — are having difficult but necessary conversations about systemic racism in our institutions, including policing," Blair's office said in a statement. "We know that change will not happen overnight, but that these conversations need to be met with concrete actions."

Blair has already spoken in favour of the use of police body cameras and legislation that recognizes First Nations Policing as an essential service.

There have been calls for a broader inquiry to examine systemic racism in the province's policing and criminal justice systems. New Brunswick's minister of Aboriginal affairs, Jake Stewart, has said he supports the call, saying the province has a problem with systemic racism.